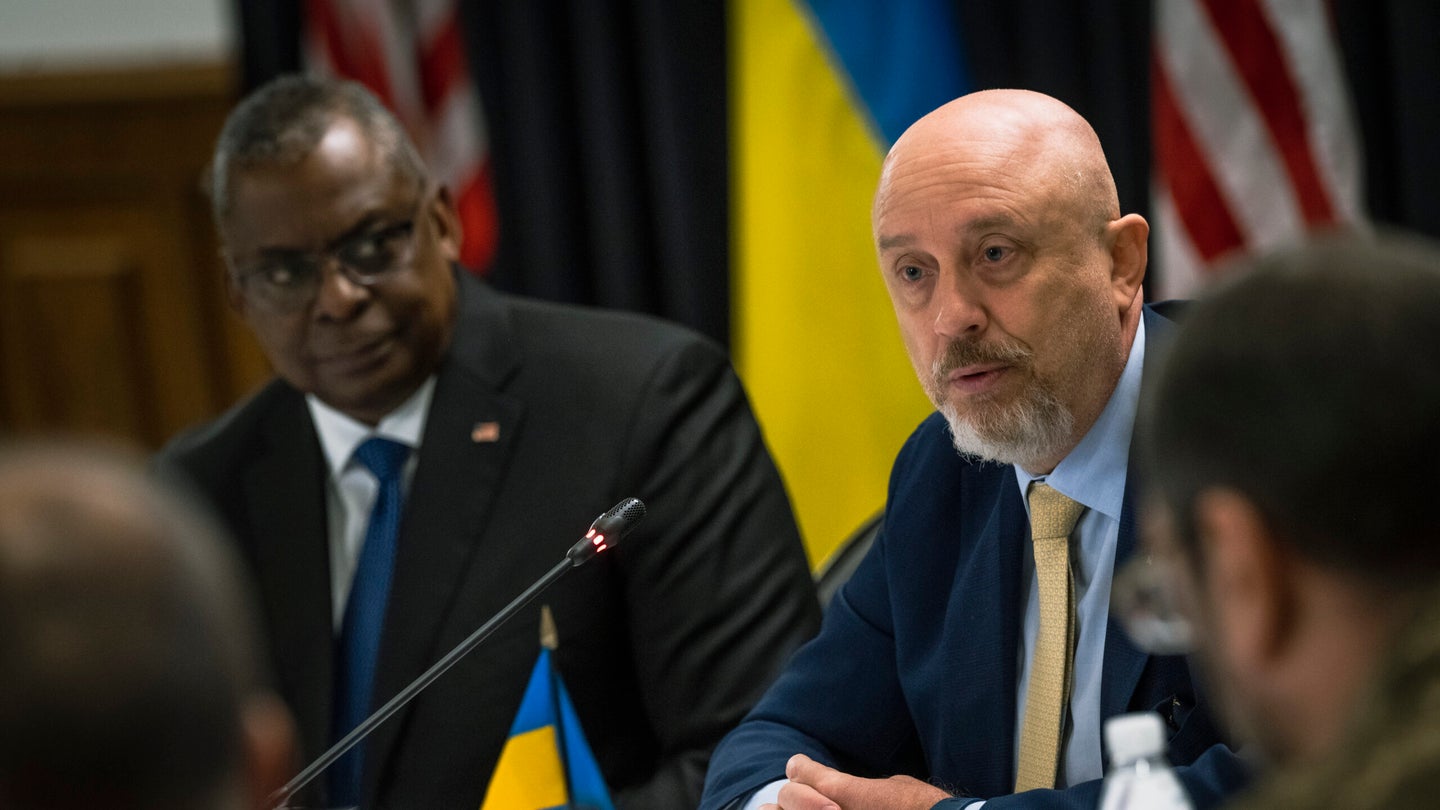 Secretary of Defense Lloyd Austin announced another $675 million in security assistance to Ukraine during a meeting of allies and partners at Ramstein Air Base in Germany on Sept. 8. It is the 20th drawdown of U.S. stocks since August 2021.

Austin made the announcement following the fifth meeting of the Ukraine Defense Contact Group, which first met at Ramstein in April. Since then, the U.S. has committed another $6.3 billion in security assistance to Ukraine.

The latest batch of security assistance to Ukraine includes:

During a press conference from Germany on Sept. 8, Austin, along with Chairman of the Joint Chiefs of Staff Army Gen. Mark Milley, said Ukraine is showing demonstrable battlefield success with donated weaponry.

“We are seeing real and measurable gains from Ukraine and the use of these systems,” Milley said.

The first batch of M777 155mm howitzers was delivered to Ukraine in April. Since then, the U.S. has delivered 126 M777s and nearly 500,0000 rounds of ammunition. Ukraine has struck more than 400 targets with HIMARS loaded with Guided Multiple-Launch Rocket System (GMLRS) rounds, Milley said.

“It has had a devastating effect,” Milley said. “Russian lines of communication and supply channels are severely strained. It is having a direct impact on the Russian ability to project and sustain combat power. Russian command and control in the headquarters have been disrupted and they’re having great difficulty resupplying their forces and replacing their combat losses.”

News of the latest drawdown deal was delivered directly to Ukrainian President Volodymyr Zelensky by U.S. Secretary of State Anthony Blinken, who made a surprise visit to Kyiv on Sept. 8.

“Ukraine’s extraordinary front-line defenders continue to courageously fight for their country’s freedom, and President Biden has been clear we will support the people of Ukraine for as long as it takes,” Blinken said in a prepared statement. “I reiterated this message to President Zelenskyy and his team today in Kyiv, which remains ̶ and will remain ̶ the capital of a sovereign, independent Ukraine. I also informed President Zelenskyy that, pursuant to a delegation of authority from the President, I am authorizing our twentieth drawdown since September 2021 of U.S. arms and equipment for Ukraine.”

Blinken also brought news of a $2.2 billion investment in long-term regional security through Foreign Military Financing “to bolster the security of Ukraine and 18 of its neighbors, including many of our NATO allies, as well as other regional security partners potentially at risk of Russian aggression.”

U.S. assistance under the State Department Foreign Military Financing (FMF) and DoD’s Ukraine Security Assistance Initiative (USAI) now stands at more than $14.5 billion since Russia launched its all-out assault on Ukraine in February. U.S. donations since Russia’s 2014 invasion and annexation of Crimea are up to $17.3 billion, according to the State Department.

Blinken heads to Brussels, Belgium, on Sept. 9 for a snap meeting with allies, the U.S. Mission to NATO announced on Thursday.

During the Sept. 8 press conference in Germany, Austin said the nations supporting Ukraine are continuing to provide aid for Ukraine’s current fight, including ongoing offensives in the south around Kherson and the north around Kharkiv. Nations supporting Ukraine’s fight against the Russian invasion also are now focused on establishing a sustainable Ukrainian military capable of achieving its long-term goals of recapturing territory occupied by Russian and collaborationist forces since 2014.

“That means meeting Ukraine’s needs for today’s battlefield,” Austin said. “I’m especially pleased by the emphasis today on positioning this contact group to support Ukraine’s self-defense over the long haul. It means finding new and innovative ways to support the Ukrainian military and Ukrainian people as they defend their country, their lives, and their freedom.”

“Nations of goodwill from around the world have stepped up as well,” Austin added. “Every time that we come together to meet Ukraine’s urgent self-defense needs, and every time that a contact member announces another new security assistance package, it’s yet another sign of the free world’s enduring support for Ukraine and its refusal to accept Russia’s Imperial aggression.”

Austin name-dropped several “nations of goodwill” for announcing new military equipment contributions to Ukraine, including the U.K.’s donation of the second batch of M270 tracked MLRS vehicles capable of firing the same guided rockets as HIMARS. That brings total British aid to Ukraine to $2.6 billion.

Germany and Denmark also announced new military aid packages that include air defense systems, he said. Austin also thanks Poland for “serving as a lynchpin of our efforts to support the Ukrainians and for his generous donations of military equipment” including the donation earlier this summer of three battalions of Krab 155-millimeter self-propelled howitzers. He also applauded Slovakia, North Macedonia, and “several other countries” for donating tanks and other armored vehicles.

In the next few weeks, in coordination with NATO, the U.S. will host a special contact group session bringing together the member states’ national armaments directors, Austin said. The meeting will focus on how each nation’s industrial base can best support a protracted war in Ukraine while meeting the needs of each nation’s military.

“I look forward to building on that momentum and finding more innovative ways for all of us to support Ukraine’s defenders,” Austin said. “That means reinvigorating our defense industrial bases to match both Ukraine’s priorities and our own needs, and it means coming up with new ways to accelerate our production of key capabilities…. In our discussions today, we’ll also talk through the next steps in standing up an international training commission for the Ukrainian forces.”

Training Ukrainian troops for a long-haul war that will last at least through winter and potentially for another year or more, is evidence that both Kyiv and its international backers are in this for the duration. NATO-standard weapons and combined-arms maneuver tactics have proven pivotal in stopping and now beginning to throw back the Russian onslaught once feared as the mightiest military in Europe.

Expect the U.S. and NATO to begin handing over more responsibility for carrying on the fight to Ukrainian leaders trained in Europe. Meanwhile, countries that have inundated Ukraine with immediately available weapon stocks turn slightly inward to replace the weaponry their own militaries might need to fend off a similar threat.