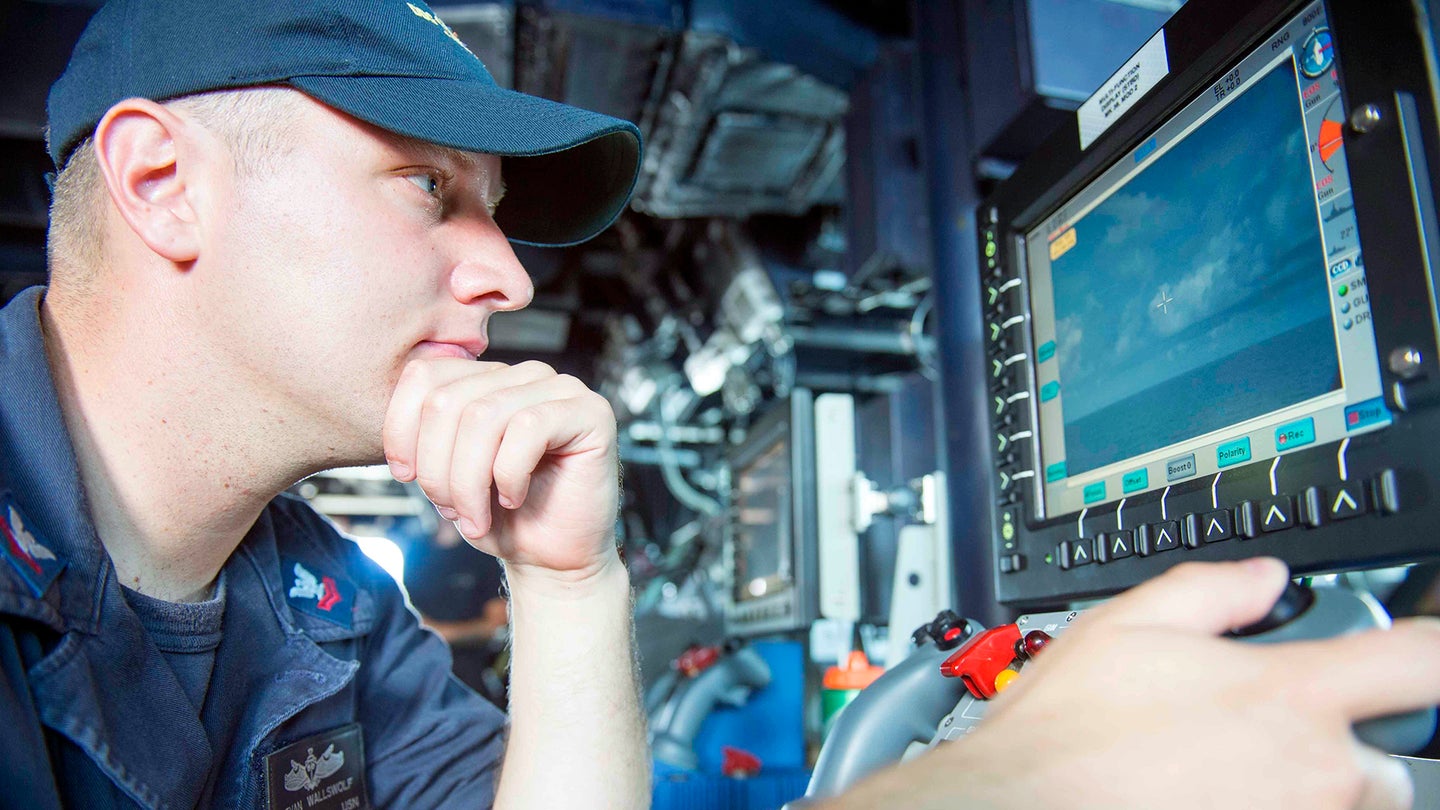 The U.S. Central Command, or CENTCOM, wants to ramp up the military’s experimentation with unmanned and artificial intelligence-powered systems in the field, as well as ways to better counter adversaries using these same technologies. A unique counter-drone software tool is already in development as Navy, Army, and Air Force task forces across the Middle East and surrounding regions work to accelerate the testing and fielding of various new capabilities.

During a press briefing held on Wednesday, Schuyler Moore, who was hired as CENTCOM’s first-ever chief technology officer this October, told reporters that experimenting with capabilities at the command level, whether they originated in the commercial sector or the Defense Department (DOD), will be critical for innovation going forward.

Moore highlighted CENTCOM’s geographical disposition — which broadly encompasses the Middle East, Southwest Asia, parts of Central and South Asia, and North Africa — as being especially ideal for achieving this goal as the region’s hot, sandy, salty, and windy climate will push technologies in ways that testing in more controlled and less harsh environments may not. However, taking testing out of DOD labs and moving it into places where the military can more quickly understand whether or not a capability is going to be useful in real-world conditions could eventually span CENTCOM’s area of responsibility (AOR).

“We’re really focused on technology experimentation and what that can look like to create sustained capability,” said Moore. “And we believe that a combatant command is the right place for that because it is so critical to get these technologies into the hands of the person that uses it in the place that they will use it, and against the threats that it will actually face. And the commercial sector knows this.”

In short, Moore envisions a defense technology development ecosystem where operational ‘friction points’ have been smoothed out well before the capability is fielded. Various military exercises will be key in realizing this, giving both the command and operators the chance to push the technology in a field-representative environment so that it can later be evolved based on findings gathered during these activities.

“In my previous experience at Task Force 59, we had this wonderful piece of kit. We were really excited to get it off the pier,” Moore said. “We’d talked to the engineers. They hadn’t put it out into the field yet. And right before we were about to go, the director of operations turned to the engineers and said, ‘This is waterproof, right?’ And the engineering team was silent. And that is okay when we’re doing an exercise in a bounded circumstance, but that is not okay if we’re in the middle of a firefight.”

The Digital Horizon series, which the latest iteration of is now ongoing after kicking off in November, is one such exercise CENTCOM is using to ‘anchor’ these efforts, as described by Moore. The three-week event is being held in Bahrain and led by the Navy’s Task Force 59, with which Moore previously worked as chief strategy officer, and seeks to better understand the ways that unmanned and uncrewed systems can be integrated with the command. This is largely the mission of Task Force 59, which was first stood up last year with a heavy focus on exploring ways to improve the U.S. military’s situational awareness in the region using unmanned and autonomous technologies, namely in regard to adversarial Iranian activities.

Scarlet Dragon Oasis is another exercise expected to inform CENTCOM’s efforts. Currently scheduled for January, the exercise will use artificial intelligence (AI) to form a common operating picture for the joint forces to carry out simulated strikes.

In addition to the Navy’s Task Force 59, CENTCOM will be leveraging the Army’s Task Force 39 and the Air Force’s Task Force 99, which was recently activated this October. Each unit was established inside CENTCOM with a general focus on tech experimentation and innovation but within their respective services. Moore is confident that these are the people who know the problems the military is facing best and could therefore be pivotal in developing the right solutions to address them.

Army Sgt. Mickey Reeve, who is deployed to Prince Sultan Air Base in Saudi Arabia but is currently on a media tour with Moore, is one of the soldiers who used his unique perspective on operations in the region to develop a tool for CENTCOM that could change the way the command addresses the ever-increasing drone threat. This October, Reeve won the inaugural Innovation Oasis competition, a contest intended to foster technological innovation within the DOD, for his entry. which he has dubbed the Interim Platform Agnostic counter-UAS Training Tool (IMPACT).

CENTCOM has described IMPACT as “a counter-Unmanned Aerial System (c-UAS) training software that simulates every c-UAS system in the U.S. military inventory and involves scenarios for any location on the globe and any UAS system available.” Moore said Reeve wrote the code for this software in his spare time while part of the c-UAS team in Saudi Arabia as a way to bridge the numerous proprietary and independent c-UAS systems to instead provide a common operating picture for training.

“I was able to build a sandbox tool for operators and teams to train against any scenario, any UAS threat in any environment, and really to push the envelope of what our training is able to provide to our operators to really get those good consistent quality repetitions in,” said Reeve. “With that, this is a tool that I built out to be completely agnostic to any sort of counter-UAS system so that way it can be used with current and future systems.”

Moore said that the Army’s Task Force 39 is already taking part in this effort as well, revealing that the unit will be involved in the build-out of Reeve’s IMPACT trainer. The command will also be collaborating with the Army Software Factory to develop an initial minimum viable product within the next 90 days that can be used by not only Prince Sultan Air Base’s c-UAS teams but at bases across the globe thanks to the software’s system-agnostic nature. This will be key going forward as Moore made it a point to assert that the force protection problems CENTCOM currently faces are not command-specific.

Task Force 39 will be involved in a range of c-UAS-specific efforts as CENTCOM’s experimental ambitions continue to come to fruition. One such initiative is the Red Sands Integrated Experimentation Center, an organization that CENTCOM announced this September it would be establishing.

While the command initially wanted the facility for Red Sands to be based in Saudi Arabia, CENTCOM now intends for Red Sands to serve as a traveling program of innovation and testing for c-UAS technologies that will “shift locations depending on what the specific project is,” Moore said. The program’s first exercise is slated for next year — a timeline that would line up with when Moore expects IMPACT to be ready for use.

All told, CENTCOM’s desires to iterate and experiment in the c-UAS arena underscore a broader shift in ethos within the DOD that has been growing in recent years when it comes to defending against drones. Moore cited the Middle East and Ukraine as being particularly informative cases in this regard. Both regions have demonstrated how drone threats are rapidly evolving in both volume and diversity, which makes for massive data returns on c-UAS systems that are challenging for a single human to sift through and make sense of.

“I think it highlights the importance of conducting experimentation against a live threat as much as you can because you can only simulate so far,” Moore said. “The shape and size and speed of what is coming at folks like Sergeant Reeve out in Saudi Arabia but also in Ukraine is something that needs to be experienced live. The friction points are something that you need to understand and navigate in the field.”

The unprecedented drone and missile strikes on two oil industry sites in Saudi Arabia that occurred in 2019, which Houthi rebels in Yemen carried out with Iran, exemplify the threat unmanned aircraft pose to Saudi Arabia and other allies in the region. The attacks also demonstrated several reasons why militaries, in general, need c-UAS system integration across the region and beyond.

Frank McKenzie, the retired Marine general who commanded CENTCOM until this April, told The War Zone in July that Israel and several Arab nations have become open to the idea of sharing intelligence and air defense information to form a common operational picture that could more comprehensively defend against drones. The initiative has been dubbed the Middle East Air Defense Alliance and could help lead to the earlier detection of UAS which would thereby inform more effective means of engagement. McKenzie has been a primary proponent of counter-drone efforts, especially during his time at CENTCOM, as can be gathered by a warning he made in 2021 during an event hosted by the Middle East Institute think tank in Washington, D.C.:

“The growing threat posed by these systems coupled with our lack of dependable, networked capabilities to counter them is the most concerning tactical development since the rise of the improvised explosive device in Iraq. They provide adversaries the operational ability to surveil and target U.S. and partner facilities while affording plausible deniability and a disproportionate return on the investment, all in our adversaries’ favor.”

In another sobering discussion on the threat that unmanned aircraft pose to U.S. forces deployed in this region held during this year’s annual Aspen Security Forum, which can be read about in detail here, head of U.S. Special Operations Command U.S. Army Gen. Richard Clarke echoed these fears. He said:

“First, as we think about this problem, I’ve been in the Army for 38 years, and in my entire time in the Army on battlefields in Iraq, in Afghanistan, Syria, I never had to look up… I never had to look up because the U.S. always maintained air superiority and our forces were protected because we had air cover. But now with everything from quadcopters – they’re very small – up to very large unmanned aerial vehicles [UAV], we won’t always have that luxury.”

This is why Reeve’s platform-agnostic IMPACT tool is expected to be so advantageous. Moore said that the software can be tailored to reflect a drone’s size, speed, and even payload.

“The fact that folks outside of the AOR [CENTCOM’s area of responsibility] couldn’t quite come up with that solution but he could is such clear evidence that the people closest to the problem should be closely involved in the solution building,” Moore said.

Reeve was awarded the Defense Meritorious Service Medal, a four-day recreational pass, and the chance to attend the military school of his choice as compensation for developing IMPACT. Considering that a commercial company would have likely been paid handsomely by the DOD for this tool, Moore said that CENTCOM is going to keep exploring the incentive structure for Innovation Oasis, understanding that competitors may want to monetize their creations in the future.

“We will continue to do that with every idea that comes out of future Innovation Oasis [competitions], and make sure that first and foremost folks know what their rights are and what their options are and then we can proceed from there,” Moore said.

CENTCOM will proceed with its broader set of experimental c-UAS efforts inside of the Red Sands program but is nonetheless hopeful about IMPACT as a starting point.

The post U.S. To Turn Middle East Into Huge Testing Ground For Counter-Drone Tech appeared first on The Drive.