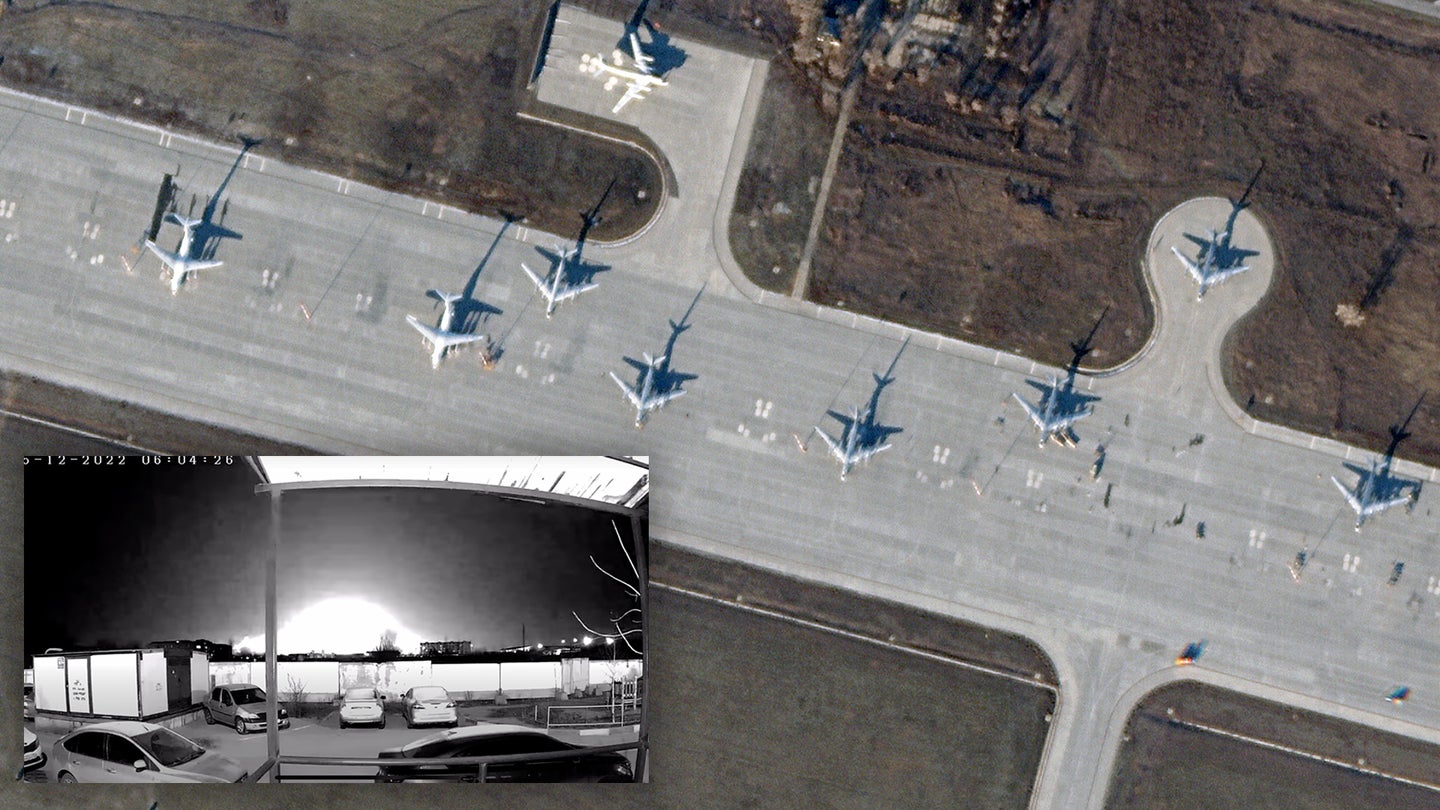 While the exact causes remain unclear at this stage, explosions shook two different Russian airbases, Engels and Dyagilevo, earlier today. The Russian Ministry of Defense has claimed that Ukraine used Soviet-made jet-powered unmanned aerial vehicles to prosecute the attacks, but that the drones were intercepted by Russian air defenses. Nevertheless, the attacks have caused some loss of life, although the extent of the material damage remains ambiguous for now.

Meanwhile, Anton Gerashchenko, an adviser to Ukraine’s Ministry of Internal Affairs, has claimed that drones of an undisclosed type were responsible for the explosion on at least one of the two airbases. All in all, the two incidents add to the evidence that Ukraine has indeed found a way of launching longer-range attacks on Russian airfields using adapted Cold War-era reconnaissance drones.

Located deep inside the country, Engels and Dyagilevo support long-range bombers used in Moscow’s standoff airstrikes on Ukraine. Russian bombers — almost certainly including ones flying from at least one of the bases where the blasts occurred — were also involved in a new wave of airstrikes against Ukraine today, preparations for which appear to have started at least a week ago.

The airbase at Engels — also known as Engels-2 — in the Saratov region is the main Russian Long-Range Aviation Base in the western part of the country and is roughly 300 miles from the Ukrainian border. An explosion here was reported early on Monday morning, just after 6:00 am local time, supported by videos posted to social media that show a major blast at the base.

Locals reported that the explosion could be heard from miles away. Another video, taken in the Saratov region, seems to include the sound of a jet engine overhead just prior to the blast. This could well be the attacking drone itself.

The extent of the damage caused by the explosion at Engels is unconfirmed, although there are reports from Russian media outlets that two Tu-95MS Bear-H strategic bombers were damaged and two people injured. On the other hand, initial satellite imagery from the Sentinel-2 satellite — admittedly only low resolution — does not show signs of obvious major damage at the base.

The Tu-95MS has been widely used to launch cruise missiles against targets in Ukraine since the start of the war. Engels is home to the 22nd Heavy Bomber Aviation Division, which operates one squadron of Bear-Hs and another of supersonic Tu-160 Blackjack bombers. Both types have been employed in the conflict in Ukraine.

Local authorities in the Saratov region have confirmed that the security services are investigating the incident at Engels.

Less information is currently available on the explosion at the Long-Range Aviation base at Dyagilevo, also known as Ryazan, located around 150 miles from Moscow and approximately 280 miles from the Ukrainian border. Here, the Russian Ministry of Defense has reported that three maintenance personnel were killed and five wounded. This explosion was initially attributed to an exploding fuel truck. That may well be the case and that vehicle could have been hit by a drone or the wreckage from it.

A photo shared on the Telegram messaging app purports to show the aftermath of the blast, with a damaged truck and a Tu-22M3 Backfire-C, and a Tu-134UBL crew training aircraft in the background. The horizontal stabilizer and engine nozzles of the Tu-22M3 have been badly damaged. It seems the aircraft had been operational — at least as recently as 2020, according to available photo evidence.

While the cause of the two explosions cannot be confirmed right now, it’s clear that blasts did take place and the Kremlin has said that President Vladimir Putin has been informed.

If it is confirmed that Ukraine is behind the blasts, which seems likely at this point, this will be a highly significant development. To date, most of the apparent Ukrainian attacks on Russian airbases have been limited to locations much closer to Ukraine’s borders: in occupied Crimea or in areas of Russia within far easier reach by improvised ‘kamikaze’ drones or short-range ballistic missiles. Otherwise, attacks on further-flung Russian airbases have apparently involved small teams of saboteurs.

For Ukraine’s part, there has still been only vague official recognition of a drone attack on one of the two Russian airbases, falling short of taking full responsibility. This is broadly in keeping with previous incidents involving infrastructure within Russia.

“The Earth is round — [a] discovery made by Galileo. Astronomy was not studied in Kremlin, giving preference to court astrologers. If it was, they would know: if something is launched into other countries’ airspace, sooner or later unknown flying objects will return to [their] departure point.”

Although cryptically phrased, this seems to point in no uncertain terms to a deliberate attack on Russian bomber bases. Moreover, the distances involved are broadly similar to the bizarre incident in March when an apparent Tu-141 Strizh reconnaissance drone, repurposed with an apparent warhead, landed in Zagreb, Croatia. That jet-powered drone flew almost 350 miles from the Ukrainian border to the Croatian capital in an episode that remains mysterious. The description of Soviet-made UAVs from the official Russian account would also fit one of those types of drones.

In June, a Ukrainian Tu-143 drone, closely related to the Tu-141, was shot down in western Russia, according to a local official. With a range of around 125 miles compared to roughly 650 miles for the larger Tu-141, the Tu-143 would not be able to hit these airbases. Taken together, however, these events strongly suggest that Ukraine has potentially adapted these different unmanned aerial vehicles as long-range strike weapons. They do have limitations in this role, however, not least relatively poor accuracy, unless more significant upgrades have been made to their guidance systems.

In the past, ‘kamikaze drones’ have also been used for longer-range attacks on targets in Russia and Crimea. Although the distances involved in attacking Engels and Dyagilevo are considerably greater than anything we’ve seen in the past using these kinds of weapons, the possibility should not be ruled out entirely. The commercially available drone of the kind used in the past against targets in Russia has an advertised maximum flying time of seven hours, and a cruising speed of 75 miles per hour, although these figures would be highly dependent on the payload carried.

Regardless, an attack on Engels delivers a blow right to the heart of Russia’s prized Long-Range Aviation fleet, which has played a major role in Ukraine and which also constitutes part of the country’s strategic nuclear forces. If Ukraine has the ability to strike what is arguably its most important base, it will surely lead to more questions about Russia’s ability to defend its critical military infrastructure. It also sends a powerful signal of Ukrainian resolve and of Kyiv’s expanding options for retaliation. It also seems likely that Russia, in turn, may well launch some kind of retaliation of its own.

However, the relationship between the airbase explosions and the latest round of airstrikes by Russian strategic bombers today is unclear. Within hours of the blasts, the Russian Ministry of Defense confirmed that it had launched a new wave of strikes, with reports that more than 100 cruise missiles had been fired. These appear to have come from launchers on land and at sea, as well as aircraft.

Rybar, the influential pro-Russian military blogging site reflected: “With the goals and objectives of the strike of Ukrainian drones on Engels, everything is clear. Another question is what the answer will be. Last time, an attack of this level of resonance [the Ukrainian attack on the Kerch Bridge] led to the beginning of the destruction of the energy system of Ukraine. Just now, there was just a reason (as ordered) to complete this business.”

Rybar declared that the latest Russian raids were “in response to the morning strike on military airfields in the Saratov and Ryazan regions.” With sources such as Rybar insinuating this, it’s possible that the Russian government might also claim a connection between the blasts and the latest airstrikes.

At the same time, the Russian missile strikes seem likely to have been planned in advance, with reports last week from Ukraine that a new attack was imminent. This apparently included the transfer of additional cruise missiles to Engels as well as moving at least some additional aircraft there. This raises the possibility that today’s blasts, if of Ukrainian origin, may actually have been intended to disrupt these plans.

If the blasts turn out to be the work of Ukraine, they also demonstrate an ability to hit Russian targets within fairly close proximity to Moscow, which is of huge psychological importance, regardless of the clear strategic implications. It would also point to Ukraine increasingly demonstrating its ability to take the fight to Russia in a more direct way, amid pushes for a negotiated settlement between Moscow and Kyiv.

Certainly, Ukraine has shown itself to be highly innovative in this conflict, especially as regards apparent attacks on targets in Russia and Crimea. We will continue to follow this story closely, with the hope that more details might emerge.