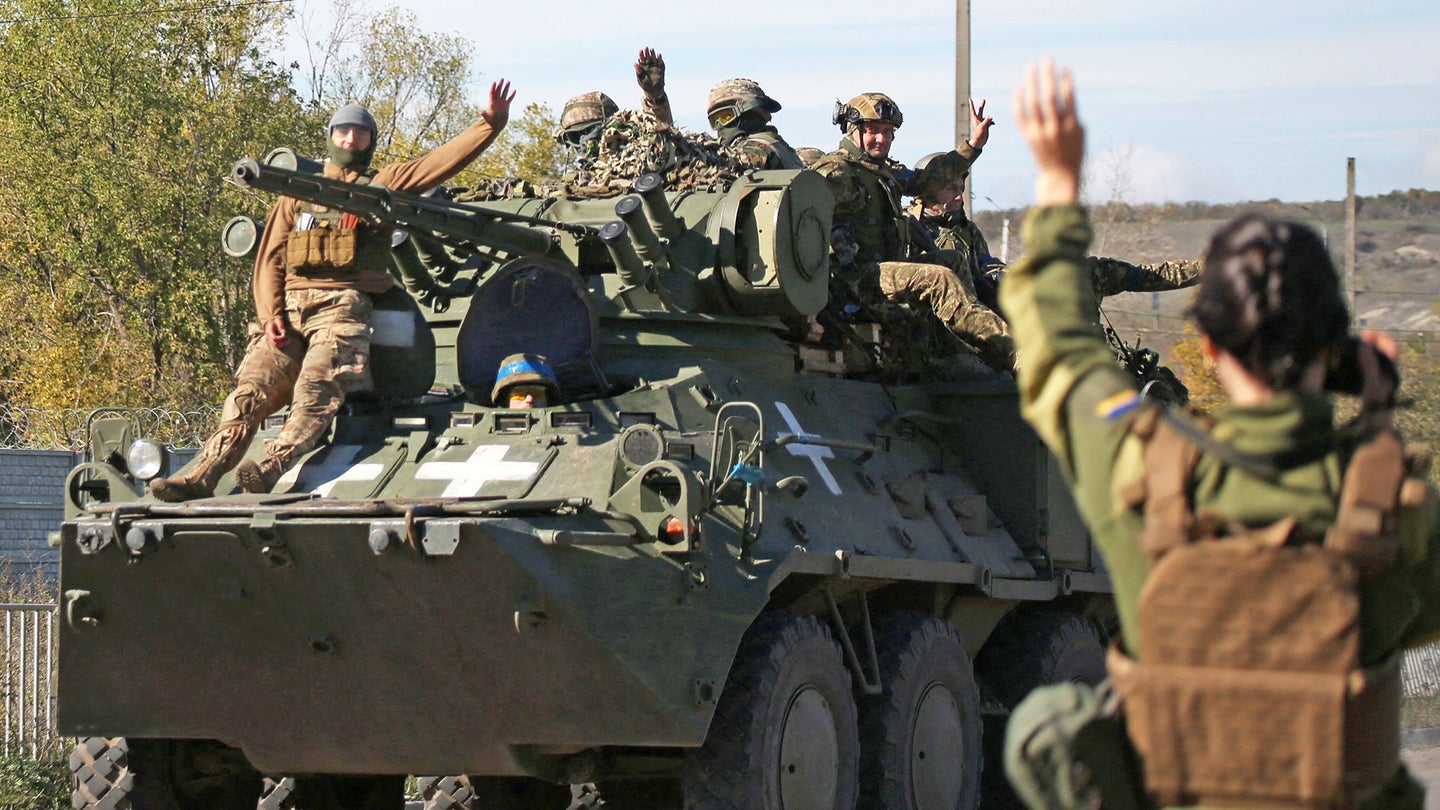 Ukrainian forces have established a foothold on the east bank of the Oskil River in the Kharkiv region, depriving Russian forces of using the waterway as a natural defensive line and wreaking havoc on efforts to shore up Russian lines, according to recent intelligence assessments of the conflict.

As they continue to push Russian forces back in the south and east, Ukrainian troops are also making it difficult for their opponents to replenish ammunition, personnel, and equipment lost in battle, according to the Institute for the Study of War.

“Ukrainian military officials noted that the Ukrainian interdiction campaign is crippling Russian attempts to transfer additional ammunition, reserves, mobilized men, and means of defense to frontline positions,” the ISW said in its Oct. 5 assessment of the war.

In the past five days, Ukrainian forces have liberated more than 1,000 square kilometers of occupied territory in the south, according to the ISW.

Russian forces are falling back toward Kherson City, with Ukrainian troops liberating several settlements on the eastern bank of the Inhulets River, according to ISW. There as elsewhere, Ukraine’s advance is outpacing Russia’s ability to plug holes in its lines with newly mobilized troops, ISW assesses.

“Ukrainian sources have rightly observed that the partial mobilization is not a major threat in the short term because the Ukrainian counteroffensive is moving faster than the mobilization can generate effects,” ISW said in its assessment of battlefield developments through Oct. 4. In northern Kherson Oblast, Ukraine is beginning to collapse the sparsely-manned Russian lines in that area,” according to ISW.

Ukraine continues to advance as a result of offensive operations along both the northeastern and southern fronts, according to the U.K. Ministry of Defense. In the northeast, in Kharkiv Oblast, Ukraine has now consolidated a substantial area of territory east of the Oskil River.

“Ukrainian formations have advanced up to 20 km beyond the river into Russia’s defensive zone towards the supply node of the town of Svatove,” the U.K. MoD said in its Oct. 5 assessment. “It is highly likely that Ukraine can now strike the key Svatove-Kremina road with most of its artillery systems, further straining Russia’s ability to resupply its units in the east.”

With Ukraine’s multipronged advance still steamrolling into Russian-occupied territory, the situation on the ground evolves hourly, but before we get into the latest details, catch up on our previous rolling coverage here.

Aside from the four regions Putin claims to have annexed based on sham referendums hld last week, on Oct. 5, he then signed a decree to specifically seize the Zaporizhzhia Nuclear Power Plant, according to the Kyiv Independent news service.

Rafael Mariano Grossi, director general of the International Atomic Energy Agency, is on his way back to Kyiv to discuss the establishment of a security protection zone around the embattled Zaporizhzhia nuclear plant. Ensuring that artillery fire from neither side further threatens the plant, which could experience a catastrophic radiological incident under various circumstances caused by the fighting, is “now more urgent than ever,” he said.

Now Ukrainian forces are closing in on the territories Russian claims, which could lead to great concern within Russian leadership, the U.K. MoD said. Putin, at least, seems more concerned that only 98 percent of the vote in Luhansk was in favor of joining Russia.

In response to the continued insistence by Russia that eastern and southern Ukrainian regions belong to Moscow, Ukrainian Defense Minister Oleksii Reznikov published the video animation below showing Kyiv’s autumn offensive. The depth and breadth of the Ukrainian offensive are shown in blue.

“While the ‘Russian parliament’ is intoxicated from the futile attempts at annexation, our soldiers continue moving forward,” Reznikov said.

Those soldiers have the full support of the U.S. and NATO allies as they work to recapture sovereign Ukrainian territory. NATO Secretary General Jens Stoltenberg said on Oct. 5 that the alliance would increase its support of Ukraine’s military efforts and praised them for “impressive progress.”

That progress is also fueled by massive amounts of military supplies and vehicles captured from fleeing Russian forces. A new report in the Wall Street Journal shows that Russia is one of Ukraine’s biggest military equipment suppliers. The Journal reports that more tanks and infantry fighting vehicles have been captured from Russian units than have been supplied to Ukraine by supportive nations. So far, the BMP-2 infantry fighting vehicle has been the most-captured vehicle by Ukraine. Many of the 170 or so Soviet-era BMPs captured have been refurbished and turned around for use in the ongoing offensives.

There is mounting evidence that Russia’s new conscripts, called up under Putin’s plan of mobilization, may be working to Russia’s disadvantage. Russian media is reporting that conscripted troops that are massing in Belgorod, Russia, are rebelling against their commanders for lack of food, shelter and being issued poor weaponry. Some draftees were simply dumped in Belgorod, close to the Ukrainian border, without any command structure or orders.

Several Soviet-era T-62 tanks also were seen in Ukrainian service after being commandeered from their Russian owners.

Ukrainian troops are not immune to having their vehicles captured, although much more visual evidence of Russian losses is available online. In the photo below, a Russian soldier sits atop a Turkish-made mine-resistant ambush-protected (MRAP) truck somewhere in Kherson Oblast, where Ukrainian forces are advancing.

Russian state media seems to have come to terms with the military plight in Ukraine. The Russian talking heads in the video below gave a grim assessment of the situation, saying Russian forces are months from mounting any counterattack.

Ukrainian troops may be advancing against Russian units along multiple sectors of the front, but the combat is undoubtedly intense. The intense videos below shows several Ukrainian Humvees dodging incoming Russian artillery fire as they speed through a field in Kherson. The footage looks almost like a scene from a video game or war movie. However, it shows an excellent first-person view of what conditions on the ground are like for Ukrainian troops who still must contend with Russia’s massed artillery fire.

Elsewhere, a Ukrainian infantry fighting vehicle came under intense Russian fire. As seen in the video below, the Ukrainian troops respond quickly to the attack by dismounting the vehicle and returning fire.

Ukraine appears to have organized roving drone-hunting units to shoot down Russian drones. Vitaly Kim, the governor of the Mykolaiv Region, posted a photo of a pair of destroyed Iranian-supplied Shahed-136 suicide drones in the bed of a pickup truck, saying it was the work of “mobile moped hunters” rather than more complex air defense systems.

Collection of crashed or shot-down Russian drone wreckage has yielded positive intelligence gathering results. It shows evidence that western computer components are the backbone of Iran’s drone capabilities that have been sold to Russia. Russia’s own standoff weapons similarly rely on western chips and other components, as The War Zone was among the first to report.

Those drones were employed as strike weapons on the town of Bila Tserkva on Oct. 4. Ukraine is vulnerable to such attacks far behind its frontlines. This attack purportedly targeted the headquarters of the Ukrainian 72nd Mechanized Brigade among other targets. Drones obtained from Iran have been used on civilian and military targets in recent weeks.

In the video below, Ukrainian troops continue to shoot down other Russian drones like the Orlan-10. This unmanned aircraft was likely downed with some sort of air defense weapon.

Electronic warfare methods of bringing down small drones are also in use by both sides. In the video below, Ukrainian soldiers show the process of disrupting a DJI drone’s control link by training an “anti-drone gun” on the target aircraft. The disruption causes the aircraft to enter into a controlled landing, where it is plucked from the sky by a Ukrainian soldier.

Ukrainian forces were seen driving one of their Dutch-made YPR-765 infantry fighting vehicles, as seen in the below video posted to social media by the Ministry of Defense.

Also on the move are the Strela-10 surface-to-air missile (SAM) systems seen in the video below. The tracked vehicles can be seen painted with Ukrainian flags and firing a missile at an unknown target that appears to be at a low altitude due to the low trajectory of the missile.

More footage of extremely low-flying Ukrainian Mi-17 helicopters has appeared online. As seen through the lens of a camera mounted on the helicopter’s sponson, it and a lead ship skim over farm fields and roads, at one point abruptly pulling up to avoid a powerline. The tactic is meant to help helicopters avoid enemy air defenses. Still, at such low altitudes, the aircraft are vulnerable to line strikes and other obstacles even when flying in bright sunshine in visual flight rules conditions, as these two are.

Romanian-made 122mm Grad high explosive artillery rockets have made it into Ukrainian service. Manufactured in the 1980s, the appearance of such weapons on the battlefield indicates that European nations supporting Ukraine continue to raid decades old stocks of weapons to feed the war’s appetite for long-range indirect fires.

Ukrainian special operations forces were seen operating at night with advanced night-vision goggles (NVGs). The four-tube NVGs seen in the photo below are likely the same ones used by so-called ‘tier 1’ U.S. special operations units, like the U.S. Navy SEALs from DEVGRU that killed Osama Bin Laden. The U.S. military has been supplying NVGs to Ukrainian forces. The Ukrainian Ministry of Defense calls the troops SEALs, like their famed U.S. counterparts.

U.S. intelligence agencies believe the Ukrainian government pulled off the car bombing in August that killed Daria Dugina. She was the daughter of Russian ultranationalist Aleksandr Dugin. The U.S. was not made aware of the attack, which is thought to have targeted Dugin, and it is not clear whether Ukrainian President Volodymyr Zelensky gave it the green light, according to the New York Times. In any case, if Ukraine did plan and conduct the operation, it shows Kyiv’s intelligence services can operate very close to some of the most influential people in Russia. As we reported in the past, Ukraine has special teams that are tasked with running sabotage operations in Russian territory, but an assassination of this level has not been observed in the past.