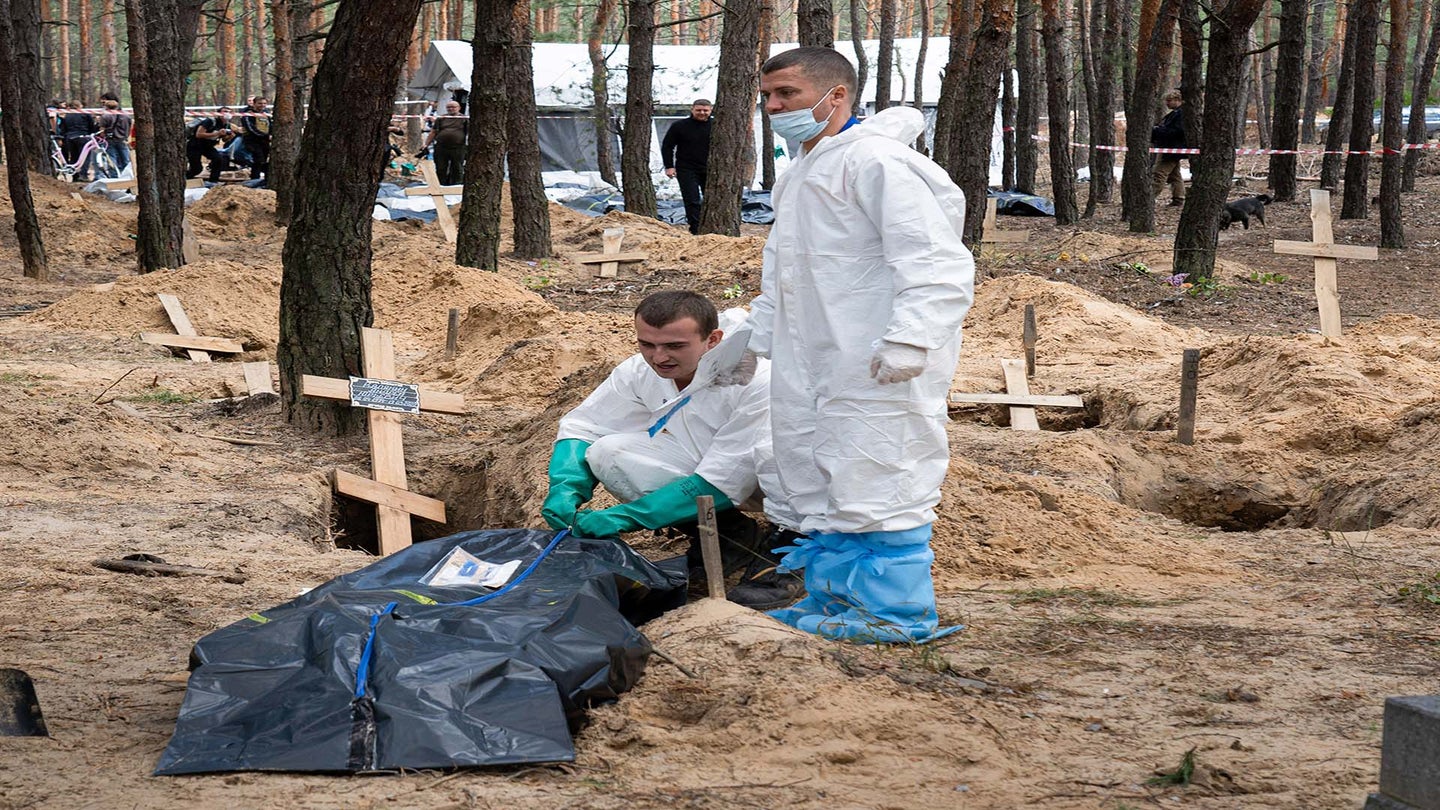 Over the course of Russia’s full-on invasion of Ukraine, officials in Kyiv and Moscow have kept a tight lid on information about the number of their troops killed and wounded, while freely throwing around unverifiable figures about their enemy.

The body count became an issue again Wednesday when Ursula von der Leyen, President of the European Commission (EC), delivered a short speech proposing the establishment of a specialized court backed by the United Nations “to investigate and prosecute Russia’s crime of aggression.”

“Russia’s invasion of Ukraine has brought death, devastation, and unspeakable suffering. We all remember the horrors of Bucha,” von der Leyen said at the opening of her speech.

“It is estimated that more than 20,000 civilians and more than 100,000 Ukrainian military officers have been killed so far. Russia must pay for its horrific crimes, including for its crime of aggression against a sovereign state.”

The 100,000 figure cited by von der Leyen about the number of killed Ukrainian troops sparked an outpouring of concern and challenges, prompting the EC to issue a clarification and scrub that number from both the video and an accompanying statement.

“Many thanks to those who pointed out the inaccuracy regarding the figures in a previous version of this video,” EC spokesperson Dana Spinant said in a Tweet a short while after the speech. “The estimation used, from external sources, should have referred to casualties, i.e. both killed and injured, and was meant to show Russia‘s brutality.”

That lines up with what Army Gen. Mark Milley, chairman of the Joint Chiefs of Staff, said earlier this month in New York.

Milley said as many as 40,000 Ukrainian civilians and “well over” 100,000 Russian soldiers have been killed or wounded in the war,” The Associated Press reported. “Same thing probably on the Ukrainian side.”

But Russian propagandists immediately pounced on the 100,000 figure, with one accusing the EC of saying Ukraine is lying about how many of its troops have died since Feb. 24.

“Apparently [the EC] realized that in this way von der Leyen actually accuses the Zelensky gang of brazen lies when it talks about losses of 10-15 thousand killed since the beginning of the war,” Boris Rozhin wrote on his “Colonelcassad” Telegram channel. “From my point of view, even 100,000+ is an underestimated figure. According to my estimates, the irretrievable losses of the Armed Forces of Ukraine (killed, captured, missing, non-combat) range from 130,000 to 155,000 – 160,000 (AFU, NSU, SBU, Ministry of Internal Affairs, Border Guard Service, PMCs, NATO regulars mimicking the APU or PMCs).”

The Ukrainian government’s public response has been more muted and focused on von der Leyen’s proposal.

“The European Commission proposes the creation of a special court to prosecute Russian crimes in Ukraine, as well as the conditions for using frozen Russian assets to rebuild Ukraine,” Andriy Yermak, head of the Office of the President, said on his Telegram channel. “This is exactly what we have been offering for a long time. Russia will pay for crimes and destruction. They will not avoid it.”

In her speech, von der Leyen said the EC is “ready to start working with the international community to get the broadest international support possible for this specialized court.”

Russia, she added, “must also pay financially for the devastation that it caused. The damage suffered by Ukraine is estimated at 600 billion Euros [nearly $620 billion]. Russia and its oligarchs have to compensate Ukraine for the damage and cover the costs for rebuilding the country. And we have the means to make Russia pay. We have blocked 300 billion Euros [nearly $310 billion] of the Russian Central Bank reserves. And we have frozen 19 billion Euros [$19.6 billion] of Russian oligarchs’ money. In the short term we could create with our partners a structure to manage these funds and invest them. We will then use the proceeds for Ukraine.”

And “once the sanctions are lifted, these funds should be used so that Russia pays full compensation for the damages caused to Ukraine. We will work on an international agreement with our partners to make this possible. And together we can find legal ways to get to it. Russia’s horrific crimes will not go unpunished.”

A richly detailed, deeply nuanced report released by the Royal United Services Institute (RUSI) Wednesday offers perhaps the most comprehensive look yet at how Russia’s all-out invasion of Ukraine unfolded and devolved, with mistakes and successes by both sides providing lessons for civilian and military leaders around the world.

Though fighting remains fierce, especially in the Donbas, very little territory changed hands over the past 24 hours. Here are some key takeaways from the latest Institute for the Study of War assessment.

In a not-so-subtle reminder of Russian aggression, Finland is commemorating the 83rd anniversary of the Winter War, the Soviet Union’s 1939 attack that left tens of thousands dead.

“We need hard power when it comes to Ukraine,” Marin told reporters when asked what soft-power influence smaller countries like Finland and New Zealand could exert.

“They need weapons, they need financial support, they need humanitarian support, and we need to also make sure that all the refugees fleeing from Ukraine are welcomed to Europe,” Marin said.

On the battlefield, meanwhile, fierce fighting continues in Bakhmut, where a CNN crew was embedded with Ukrainian troops and provided some hellacious video.

More than 2,000 miles to the southwest, a bomb exploded at the Ukrainian embassy in Madrid, Spain, slightly injuring one man there. Dmytro Kuleba, the Ukrainian foreign minister, urged all of the country’s embassies to tighten security measures.

And more than 350 miles northwest of Bahkmut, a fire broke out at an oil refinery in the Bryansk region of Russia. The pro-Kremlin news agency Izvestia surmised that the fire could have been sparked by a drone attack.

“According to Izvestia‘s source in the emergency services, the fire could have occurred as a result of an unidentified munition dropped from a drone getting into the tank , Izvestia reported. “The tank with a capacity of five thousand tons was full at the time of the incident. Then another two tanks of the same capacity caught fire.”

Elsewhere in Russia, a column of T-62MV tanks with dynamic protection (explosive-reactive armor) was spotted in the Zabaykalsky region a few days ago.

Despite continued Russian attacks, Ukraine is still fighting in the air, seen here in a two-ship of Su-25 Frogfoot attack jets being escorted by a MiG-29 Fulcrum at low-level.

And they are fighting on the water as well, seen here patrolling the Dnipro River.