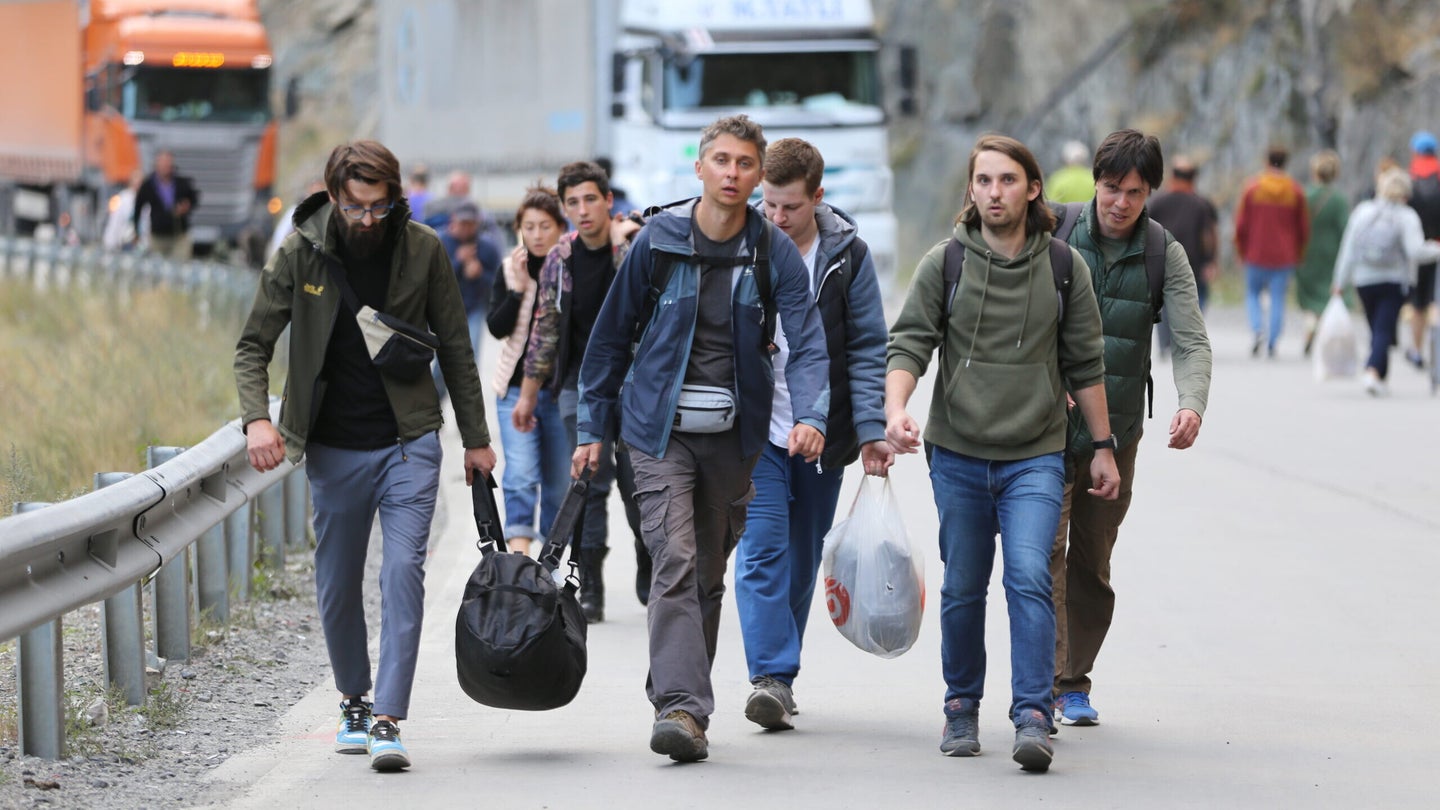 More Russians have likely fled their country in the week since President Vladimir Putin announced mobilization plans than made up the entire force massed to invade Ukraine seven months ago, according to the U.K. Ministry of Defense.

“In the seven days since President Putin announced the ‘partial mobilization,’ there has been a considerable exodus of Russians seeking to evade call-up,” the U.K. MoD said in its latest intelligence assessment of the war. “While exact numbers are unclear, it likely exceeds the size of the total invasion force Russia fielded in February 2022.”

Estimates of Russia’s pre-invasion military force range from 130,000 to 190,000 troops. Middle-class, better educated, and ethnic majority Russians are as overrepresented in the masses fleeing Russia as ethnic minorities appear to be in those being conscripted. The exodus, combined with the number of military-aged male Russian citizens being mobilized, contributes to an accelerated “brain drain” from Russian society, according to the U.K. MoD.

Putin’s partial mobilization is an effort to plug holes in his front lines in Ukraine with at least 300,000 recruits. The problems with calling up masses of untrained, poorly equipped conscripts were immediately apparent as troops began showing up to frontline positions with little more than a rifle and a few days of training, if that.

The conscripts in the video below were dumped in a snowy field with no officers, uniforms, weapons, or direction.

Throngs of military-aged men flocked to airports in Moscow, St. Petersburg, and other cities trying to book flights out. All along the Russian border with Europe, long lines of cars stacked up carrying potential recruits hoping to evade conscription. In a genuine sense, Putin mobilized his pool of draftees, if not precisely in the manner intended.

Putin seems to recognize that mobilization was not the panacea he may have hoped for. In a recent video address, he said the wrong sorts of people were being conscripted into his beleaguered army.

“We must correct mistakes and not allow them going forward,” he says in the video below.

A new poll by the Levada Center, an independent Russian nongovernmental social research firm, shows that 56 percent of Russians are anxious about the war. That is up from about 36 percent just a month ago. Mobilization has caused widespread protests in Russia.

Ukrainian forces are exploiting the seeming abysmal morale within the Russian ranks. They have instituted a policy of allowing Russian prisoners of war to call home periodically to promote their mental health while in captivity. It also allows individual Russian troops to speak candidly to loved ones about the realities of the war, circumventing Kremlin propaganda about how the conflict is progressing that almost certainly sugar-coats the conditions and circumstances under which its soldiers are serving.

In an attempt to help bolster its losing hand in Ukraine, Russia has redeployed most of the troops it had along its northwestern border area.

The tactical realities of the two armies now facing off in eastern Ukraine could not be more different. Russian forces are on the defensive along nearly their entire front from Kherson in the south to Kharkiv in the north. They have suffered severe logistical challenges and supply shortages since the invasion began, all the while being hounded and pounded by Ukrainian precision artillery strikes. Their numbers have dwindled and much of their best equipment has been damaged or destroyed, or is increasingly in various states of disrepair. Replacements are usually of inferior capabilities and quality — if they can be had.

Opposing them is a well-trained, disciplined, and well-equipped army with the deep backing of the United States and its NATO allies. Most of all, they are fighting for their very soil and freedom. Ukrainian forces have gained the tactical initiative. The Ukraine Ministry of Defense pointed out the disparity in a Thursday video posted to social media.

Ukraine’s information battle is also deeply on the offensive. Videos like the one below depict a military force with unbounded morale to the world.

Putin has set the stage to escalate the war further, even as his troops defend occupied ground from the advancing Ukrainians. Before we get into the details, catch up on our previous rolling coverage of the conflict here.

Moscow plans to formally annex four regions of Ukraine in a ceremony in Moscow on Friday, according to multiple media outlets. Referendums on annexation were held in the four areas — Luhansk and Donetsk in the east and in Zaporizhzhia and Kherson in the south — late last week that were almost universally condemned as totally corrupt. In preparation for the ceremony, the Russian-installed leaders of all four regions were flown to Moscow aboard a commercial airliner on Wednesday.

“Russia continues its constant information warfare, which is part of the war effort,” Morawiecki said. “Russia’s information products and narrative are making their way into public opinion in the West. This can also be seen in the way pseudo-referendums organized by the occupiers are described.”

U.S. Senators Richard Blumenthal, a Democrat from Connecticut, and Lindsey Graham, a Republican from South Carolina, held a joint press conference at the Capitol to condemn Putin’s annexation plans.

Putin’s next move is anyone’s guess now that his mobilization plan seems unlikely to salvage Moscow’s war effort. However, Ukrainian officials are concerned that the likelihood of Russia using a tactical nuclear weapon to regain the initiative and punish Kyiv is “very high,” according to Vadym Skibitsky, deputy head of Ukrainian military intelligence.

“They will likely target places along the frontlines with lots of personnel and equipment,” Skibitsky told The Guardian, according to the Kyiv Independent news service. “In order to stop them, we need not just more anti-aircraft systems but anti-rocket systems.”

The possibility of Russia using nuclear weapons has been on the Pentagon’s radar, but so far, the Defense Department has seen no reason to change its nuclear posture in Europe. In his Sept. 29 press conference, Senator Lindsey Graham said the use of a nuclear weapon in Ukraine would constitute a strike on NATO, even though Ukraine is not a member state.

Ukrainian forces have liberated several villages around Lyman in the Donetsk Oblast. Battles to recapture other towns around the city are ongoing as Ukraine attempts to surround the city and completely seal off the remaining Russian forces.

Pro-Russian media outlet Rybar suggests that Ukrainian forces have completely encircled Lyman. According to Rybar’s most recent map of the tactical situation in Lyman, the remaining Russian troops are trapped in a pocket there.

As they push Russian forces farther east, Ukrainian troops are taking custody of a growing fleet of undamaged, seemingly abandoned tanks. Several Russian T-80 tanks were recently inducted into Ukrainian service around Kharkiv in the north.

Ukrainian forces also came into possession of two more modern T-90M tanks and an older T-72B3 complete with a roof cage meant to protect against anti-tank guided missiles, or ATGMS, and from drone attacks, although they are largely ineffective.

In some places, Russian and Ukrainian tanks are facing off in traditional tank battles, as shown in the video below. The Russian tank does not fare well in the duel. It is seen hit by a round, demonstrating one of the catastrophic ammunition detonations that plagued Moscow’s tanks in this conflict.

Russian forces lost a few more Orlan-10 unmanned aerial vehicles to Ukrainian forces. One photographed in Sumy Oblast seems to have been shot down and is in pieces. Another in the east appears undamaged, so it was likely brought down with electronic warfare means or it just crashed, although the soldier pictured is posing with a man-portable air defense system (MANPADS). Ukrainian forces have been able to regularly down Russian reconnaissance drones in this conflict, which has been one factor that has prompted Moscow to source more unmanned aircraft from Iran.

Turkish President Recep Tayyip Erdogan spoke with Putin on the phone on Sept. 29. During the conversation, Erdogan offered to mediate the conflict if Russia and Ukraine agreed to reopen negotiations, according to a readout of the call released by Erdogan’s office.

Mark Hamill, the actor famous for playing Jedi Knight Luke Skywalker in the Star Wars films, met virtually with Zelensky as an ambassador for United24, a group raising money to fund a Ukrainian “drone army.” Hamill has been a vocal supporter of Ukraine on social media since the outset of hostilities in February. Ukraine, and Zelensky himself, have often used Star Wars metaphors and imagery that depicts Ukraine as the rebel force taking on the evil and much more powerful empire.