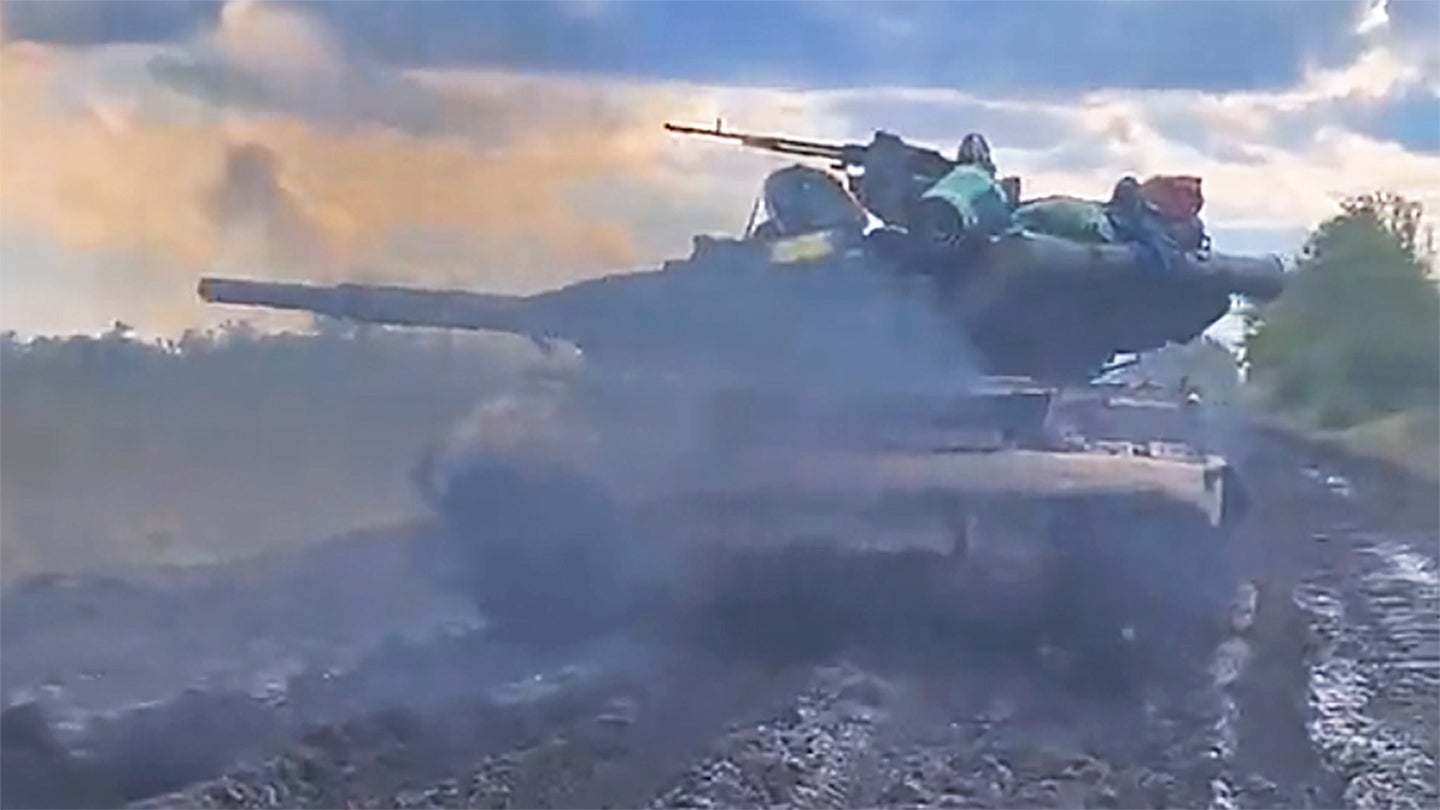 Russian lines in the Kherson region, which has been a scene of fierce fighting as of late, are being compromised by rapidly advancing Ukrainian units, including those sporting heavy armor.

The counteroffensive has reportedly liberated a number of towns that make up parts of the four areas Russian President Vladimir Putin has been in the process of illegally annexing through sham referendums held over the past couple of weeks. The lower house of Russia’s parliament, or Duma, has now written the results of these heavily manipulated elections into annexation treaties, which will be reviewed by the upper house tomorrow, claiming that the Kherson, Zaporizhzhia, Donetsk, and Luhansk territories now belong to Russia. However, it is now widely reported that Russian lines near Kherson and Luhansk especially are facing heavy pressure.

Images of Ukrainian flags having been raised in villages like Lyubymivka and Myroliubivka in the Kherson region have emerged, further supporting the claims that Ukrainian forces have begun taking these areas back.

Since this summer, Ukrainian forces have been choking Russian supply lines leading into Kherson and striking bridges across the Dnipro (Dnieper) river using U.S.-supplied High Mobility Artillery Rocket Systems (HIMARS) to limit enemy access to the region. Because of these efforts, Ukraine has reportedly now been successful in liberating the region’s Arkhanhelske, Khreshchenivka, Mykhalivka, and Novovorontsovka villages as well.

Ukraine’s recent movements have been so detrimental to Russia’s military operations that the Kremlin has even begun publicly acknowledging it. In his daily briefing, Russia’s Defense Ministry spokesman Igor Konashenkov pointedly referenced the advances before making unverified claims that Ukraine’s military had also suffered heavy losses because of it.

“With numerically superior tank units in the direction of Zolota Balka and Oleksandrivka, the enemy managed to forge deep into our defenses,” said Konashenkov.

Even still, the United States has yet to see any large-scale movement of Russian forces in these areas despite the significant battlefield losses to Ukraine. There have been some who predict that Russian units in these areas could collapse as the strength of the tide of war grows stronger for Ukraine’s forces.

Konashenkov’s statement could be among the first in a major shift in the official Russian information space partly brought on by the Ukrainian Forces’ success in taking back as many previously occupied areas as they have. The Institute for the Study of War (ISW) think tank has reported that the narrative previously pushed by the Kremlin, which frequently insisted that the defense ministry had everything under control, is crumbling because of it.

The ISW says that Putin’s mobilization declaration was the tipping point for this deviation in Russian ethos as it largely affirmed Russian defeat in key areas.

Also on the southeastern front, Russians did try to gain ground by launching assaults in Bakhmut, Vyimka, and Avdiivka. But ISW reports that those efforts were unsuccessful.

Overall, the Ukrainian counteroffensive in the south appears to be really picking up steam.

Before heading into the latest news from Ukraine, The War Zone readers can get caught up on our previous rolling coverage here.

In the United Kingdom Ministry of Defense’s daily intelligence update on the war in Ukraine, it was reported that Putin is attempting to address the concerns raised by his September mobilization decree. All the while, it was also noted that Russian draftees are still struggling to receive the proper training due in part to a lack of adequate leadership.

Russian forces that escaped destruction were recorded near villages in the recently liberated Lyman area and claimed that they have been sleeping on the street near the heating main for two days. They revealed that they are unaware of what is supposed to happen next.

After the initial mobilization, some conscripts were told that they would have to buy certain pieces of their own equipment. Now, it would appear that sellers are price gouging their products knowing that draftees have limited options in acquiring the supplies they need for combat.

There has been a massive uptick in reporting about potential strategic posture changes and operational shifts to accommodate the possible use of nuclear weapons at Putin’s command.

More than not, these stories have proven to be poorly sourced or inaccurate. Regardless, we can discuss some of them here as they have permeated the information landscape. A recent totally unconfirmed report has suggested that Russian President Vladimir Putin will be holding a ‘nuclear test’ near the Ukrainian border in an effort to demonstrate his willingness to use such weapons. You can read all about this potential strategic move here.

United Kingdom-based news outlet The Times has released an article citing unnamed defense sources who have warned that this is becoming a possibility. The development also comes amid a number of recent sightings that have emerged on social media showing a train operated by Russia’s nuclear division making its way through central Russia.

Konrad Muzyka, a defense analyst based in Poland, told The Times that the train is linked to the 12th Main Directorate of the Russian Ministry of Defense, which he said is “responsible for nuclear munitions, their storage, maintenance, transport, and issuance to units.”

Several reports claiming that the Russian Navy has deployed its long-range nuclear torpedo-carrying Belgorod submarine have also emerged. Unverified sources have said that NATO sent an intelligence report to its members alerting them of the deployment. While it is worth noting this one-of-a-kind submarine is not in port, it does not mean its time at sea is in any way linked to the circumstances in Ukraine.

Once again, while any of these events could be relevant to the larger strategic picture, there is no actual evidence that they are. Meanwhile, the White House continues to insist that the likelihood of Russia using nuclear weapons against Ukraine is low. Retired U.S. Army Gen. David Petraeus, however, during an appearance on the ABC News show “This Week” asserted that the United States needs to take Russia’s possible threats seriously.

Petraeus went as far as to say that the United States “would respond by leading a NATO, a collective effort, that would take out every Russian conventional force that we can see and identify on the battlefield in Ukraine and also in Crimea and every ship in the Black Sea” in a statement that has since been criticized for being too inflammatory.

Even the Kremlin has been cited as using language that would suggest it is “thinking logically” and not emotionally about the use of nuclear weapons in Ukraine, although what that actually means is unclear. The sentiment came after a Putin ally suggested that Russia use a “low-yield nuclear weapon.”

Elon Musk is under fire for sharing a Tweet that asked his followers to vote on whether or not they think his proposed plan of action could end the conflict between Russia and Ukraine.

Musk was quickly called out by many of those directly involved in the war for sharing his opinions, which included Ukrainian government official Sergiy Kyslytsya who compared Musk’s input to receiving plumbing advice from someone who has never been a plumber.

Ukrainian President Volodymyr Zelenskyy himself is also among those who responded, albeit less aggressively.

The fate of illegally annexed regions in Ukraine will reportedly be reached in the coming days. The Kremlin has announced that it will be ‘consulting’ with the local populations of these areas to determine exact borders. Exactly what these consultations will consist of is unclear. Considering the ground Russia is losing, declaring territory as its own it does not even hold would be problematic. Regardless, nearly the only capital on earth that will recognize whatever borders the Russian government draws up will be Moscow.

Foreign assistance continues to add to the Ukrainian Armed Forces’ capabilities, with the commissioning of a new corvette built in partnership with Turkey having just taken place. Hetman Ivan Mazepa of the Ukrainian Navy was launched in Turkey on Sunday, however, it won’t arrive in Ukraine until 2024. You can read more about the new corvette, and the questions surrounding it, in our recent report here.

The Czech Republic’s ‘Gift For Putin’ project was also successful in raising enough money to buy Ukrainian forces a T-72 Avenger tank. The fundraising initiative reportedly took less than a month and covers the cost of the tank as well as the expenses required to deliver it to Ukraine. The same effort also raised funds for the acquisition of two Bivoj reconnaissance drones.

CNN has also reported that Kyiv has offered to discuss specific Russian targets with Washington in hopes of finally receiving the Army Tactical Missile Systems (ATACMS) it has for so long been lobbying for.

The Biden administration has been resistant to such a weapons transfer out of fear that the systems would be used to strike inside Russia’s long-held territory. A surface-to-surface missile fired by an ATACMS has the potential to fly at a range of 190 miles (300 kilometers), which is about four times the distance that HIMARS can achieve. It also carries a much larger, harder-hitting warhead.

The Iran-delivered Mohajer-6 drone has made another appearance in Ukraine. The capability was reportedly recovered by Ukrainian forces and pictures taken of the system and shared on social media show it in nearly perfect condition.

The drone reportedly fell out of the sky and into the Black Sea where it was then taken to land and inspected. In pictures taken of the drone, it can be seen still armed with at least one Iranian Ghaem-5 guided bomb with a TV seeker and a high-explosive anti-structure (HE.AS) warhead. The Ukrainian Ministry of Defense reported that the drone was used to launch an attack on Odesa days prior.

A video has also surfaced confirming that the Ukrainian Air Force’s small lot of flying Su-24s are still active. The footage shows one such type cutting across the sky above an undisclosed region in Ukraine at a low altitude before firing off a couple of flares.

The post Ukraine Situation Report: Breakthrough In Kherson appeared first on The Drive.