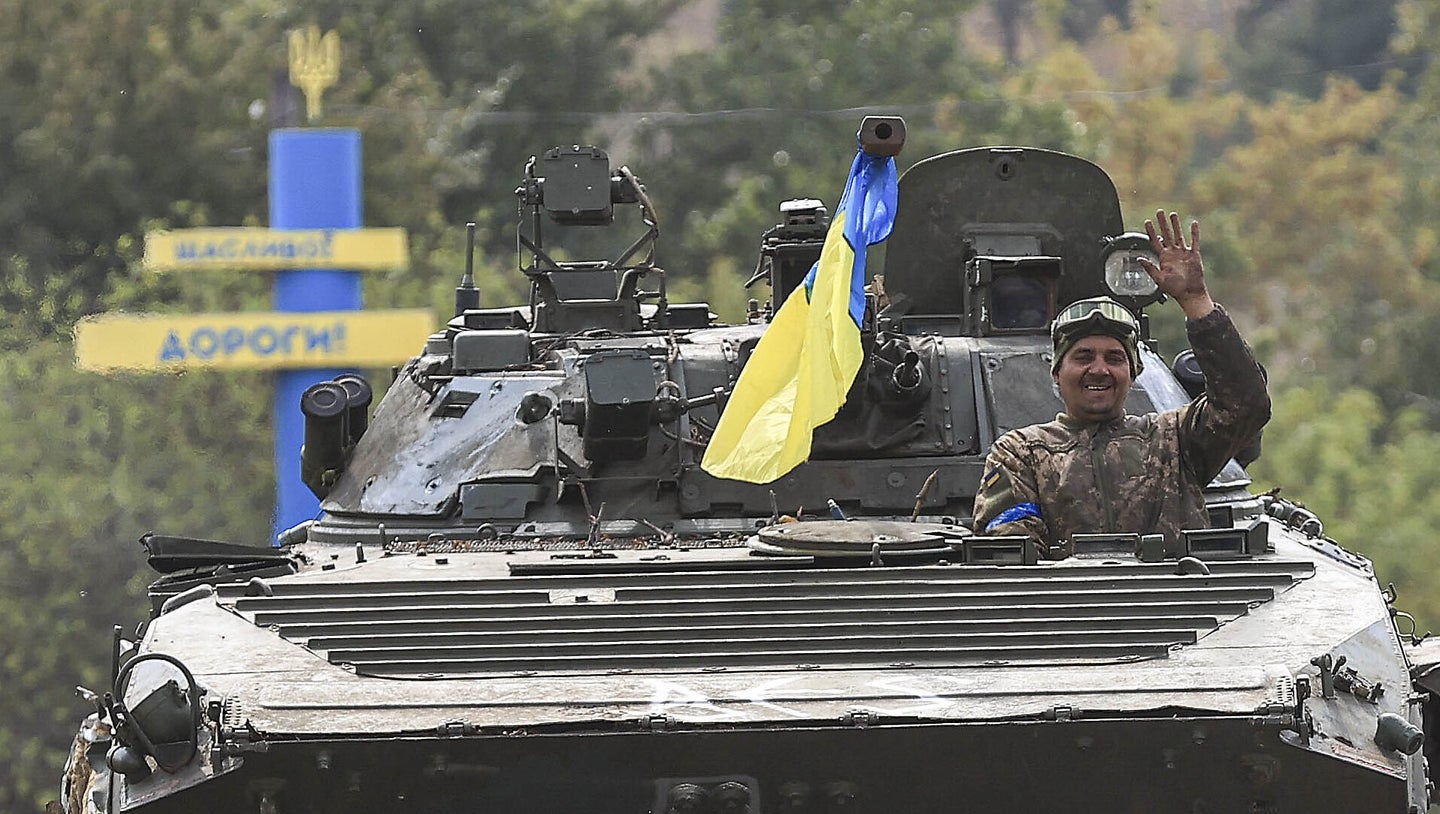 Ukraine’s multipronged offensive that kicked off about a week ago has punched miles into Russian-occupied territory in multiple sectors, with dozens of towns recaptured, scores of prisoners taken, and many pieces of abandoned equipment seized.

Brig. Gen. Oleksyi Hromov, Deputy Chief of the Main Operations Department of the General Staff of the Armed Forces of Ukraine, said Thursday that Ukrainian forces had pierced Russian lines around Kharkiv in the north and pressed more than 30 miles beyond. In a matter of a few days, they have liberated at least 20 settlements, Hromov told the Kyiv Independent news service. Anton Gerashcenko, an advisor to Ukraine’s minister of internal affairs, also confirmed the progress on Sept. 8.

Social media is flooded with video and images from the areas of the heaviest fighting in Kherson in the south and Kharkiv in the north, with triumphant Ukrainian troops riding atop armored vehicles into formerly occupied towns and raising the blue-and-yellow standard.

Balakliya, a city of 27,000 in the Kharkiv region, was liberated on Sept. 8 after six months of occupation. Locals greeted Ukrainian troops with hugs and tears of joy. Also recaptured was Shevchenkove southeast of the city of Kharkiv.

Evidence abounds that Russian forces are hastily fleeing the Ukrainian advance. Ukrainian forces are capturing and posting to social media photos of tanks and armored vehicles. The video below shows an entrenched Russian position filled with ammunition and food the former owners did not have time to take with them.

Chairman of the U.S. Joint Chiefs of Staff Gen. Mark Milley assessed Ukrainian progress at a press conference on Sept. 8. While the offensive is still “in the early days,” Ukraine has succeeded in seizing the strategic initiative, he said.

Milley told reporters at Ramstein Air Base, during a press conference alongside U.S. Secretary of Defense Lloyd Austin, that “It’s too early to give a full assessment. But today, Ukraine is effectively using their fires to shape the ground maneuver as they continue their offensive in the south and what we’re talking about is the area just north of the Dnieper River in the vicinity of Kherson.”

Asked whether he thought Ukrainian forces risk overstretching their logistics capability during such a seemingly lightning-fast advance, Milley simply said “No,” I don’t.”  Active combat is occurring along roughly 1,300 kilometers of a 2,500 front line stretching from Kharkiv to Kherson, he said.

“There’s fighting all along that front,” Milley said. “I don’t think they are particularly overstretched, per se, but there is fighting both offense and defense from all the way from Kharkiv all the way down to Kherson. They’re continuing the fight. They’ve got the force to do it, and we’ll see how this plays out.”

Before we get deeper into the update, readers can find our previous rolling coverage of the conflict here.

Ukraine’s battlefield success is yielding intense and often graphic footage as the country’s troops continue to chip away at Russian forces in several sectors. The video below shows a wild Humvee assault by Ukrainian troops on a Russian-held town. Riding full speed into battle, with Browning M2 .50 caliber machine guns blaring, the unit charges across open terrain before soldiers dismount to seize enemy positions.

When conditions do not advise blasting away from the turret of a Humvee, it is best to stay buttoned up inside an armored vehicle and fire at the enemy using a remote weapon station. This video shows just that: a Ukrainian soldier firing a 30mm autocannon from the relatively safe confines of a BTR-4E infantry fighting vehicle.

The Ukrainian Air Force remains active. Video of two Su-25s flying low over a divided highway popped up online recently. The pilots may be using the road for ease of navigation, but more likely the maneuver is for evading Russian air defenses, which have considerable range against targets at altitude, and obstacle avoidance while flying so fast and low.

Another video features first-hand footage of the exploits of several Mi-18 helicopters in various operations. The helicopters can be seen flying low over the Ukrainian landscape, lobbing unguided rockets at Russian positions, deploying flares, and nearly skimming their tires through a river.

The Ukrainian General Staff also has confirmed that missiles struck the Saki airfield in Crimea last month. That attack destroyed at least 10 Russian military jets at the Russian base far behind the front lines. It still is unclear what missiles could have reached so far as nothing in Ukraine’s declared arsenal is capable of doing so. It is very possible the term missile was used for improvised long-range suicide drones that blur the line between drones and cruise missiles. We know these have been used in such attacks before. You can read all about them here.

In a joint statement to Ukrinform, Valerii Zaluzhny, commander-in-chief of the Armed Forces of Ukraine, and Mykhailo Zabrodskyi, first deputy chairman of the Verkhovna Rada Committee on National Security, Defense, and Intelligence, praised the “successful efforts of the Armed Forces of Ukraine to physically transfer hostilities to the temporarily occupied territory of the Autonomous Republic of Crimea.”

“We are talking about a series of successful missile attacks on the enemy’s air bases in Crimea, first of all, on the Saky AB.”

Ukrainian Minister of Defense Oleksii Reznikov met in Germany with numerous counterparts from NATO nations and other countries supporting Kyiv’s ongoing battle against the Russian invasion. Aside from U.S. Defense Secretary Lloyd Austin, who announced another $675 million in security assistance to Ukraine, Reznikov met with British Defense Minister Ben Wallace during the meeting of the Ukraine Defense Contact Group at Ramstein Air Base.

Reznikov also caught up with NATO Secretary General Jens Stoltenberg who for his tireless support of Ukraine was gifted a piece of a Russian Kalibr cruise missile Reznikov said fell on Kyiv.

Meanwhile, U.S. Secretary of State Antony Blinken made a surprise visit to Kyiv to meet with Zelensky and deliver the news of Washington’s most recent aid package. While in the Ukrainian Capital, Blinken was treated to an audience with Patron, a Jack Russell Terrier who has become famous for working as an explosive detection dog for Ukraine’s State Emergency Service.

The post Ukraine Situation Report: Dozens Of Towns Retaken From Russians appeared first on The Drive.