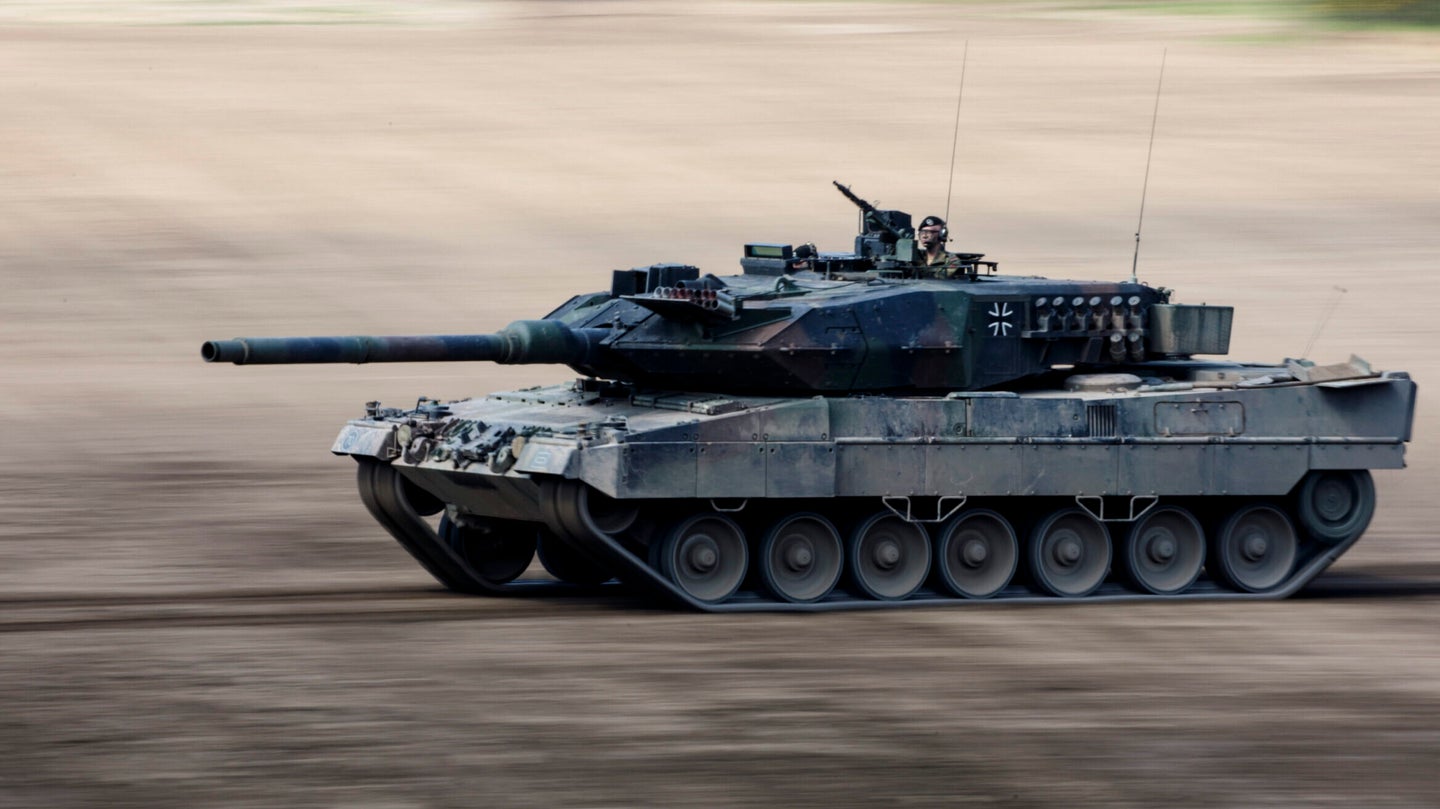 The European Union has passed a sweeping, but non-binding resolution condemning Russia’s ongoing war in Ukraine that, among many other items, calls on member states to begin the transfer of Leopard main battle tanks to the Ukrainian Army and training troops in their use immediately.

On Oct. 5, the European Parliament passed a “Joint Motion For A Resolution on Russia’s Escalation of Its War of Aggression Against Ukraine.” The document includes 40 line items that outline Russia’s perceived transgression’s against international law and calls on European nations to “massively increase their military assistance, particularly in the areas where it is requested by the Ukrainian Government, to allow Ukraine to regain full control over its entire internationally recognized territory and successfully defend itself against any further aggression by Russia.”

Specifically named in the text are Leopard tanks, third-generation main battle tanks developed in the 1970s for the West German military.

Deep in the document is a call to “coordinate weapons deliveries … of advanced weapons systems such as Leopard tanks,” and it “calls on the Member States to immediately start training Ukrainian soldiers in this regard.”

The tanks would be a massive boon to the Ukrainian Army as it advances against and through Russian lines in its ongoing multipronged offensive. At present, as many as half of Ukraine’s tanks are repurposed vehicles captured or recovered from retreating Russian troops, according to the U.K. MoD. Its latest intelligence assessment of the war finds that “Ukraine has likely captured at least 440 Russian main battle tanks and around 650 other armored vehicles since the invasion” in February.

“Over half of Ukraine’s currently fielded tanks fleet potentially consists of captured vehicles,” the U.K. MoD said. “The failure of Russian crews to destroy intact equipment before withdrawing or surrendering highlights their poor state of training and low levels of battle discipline.”

That’s an impressive intake of enemy weaponry. Still, many vehicles are Soviet-era models, or upgrades of them, that are not as advanced as modern designs like the Leopard, U.S. Abrams, and U.K.’s Challenger II, all third-generation tanks. Older tanks like the T-62 have outdated armor, ammunition storage, and other vulnerabilities that make them ripe prey for modern anti-tank guided missiles.

However, the Soviet-designed T-80 tank, some of which have been commandeered by Ukrainian forces, is a third-generation tank. Ukraine has even captured the even more advanced T-90.

It’s not immediately clear whether the resolution was specifically talking about potential transfers of older 1960s-era 105mm-gun-armed Leopard 1s, which have largely been removed from service in Europe, or newer Leopard 2s that sport 120mm main guns and are in service with 14 European nations, Canada, and others. Refurbishing older Leopard 1s now in storage and sending them to Ukraine has been discussed in the past.

Tank battles have erupted in the east and south as Ukrainian forces advance on Russian lines. The government in Kyiv has called for modern tanks for months but so far has been rebuffed if not outright denied. European nations, particularly Poland, have donated modest fleets of second-generation T-72 tanks to the Ukrainian Army. The U.S. also has said Abrams tanks are on the table but has not promised any to the cause.

Before we get into all the new details about what is happening in Ukraine, look at our previous rolling coverage here.

Though Ukraine has recently liberated town after town in its ongoing advances in the east and south, the map of the ground war is largely unchained in recent days. As seen below, the U.K. MoD shows ongoing offensives in the Kherson region to the south and Kharkiv region in the northeast. Ukraine is nearing wide rivers in both areas that could be slowing their forward progress. These are the same rivers that have presented Russian forces such difficulty advancing earlier in the conflict and now retreating as Ukraine has systematically targeted bridges in their rear.

Aside from calling for the donation of tanks, the EU resolution covers the possibility that Russia could deploy a tactical nuclear weapon to turn the tide on its disastrous invasion. Putin alluded to the possibility when announcing the mobilization of at least 300,000 conscripts in late September and has done so repeatedly since.

The EU “calls on the Member States and international partners to prepare a quick and decisive response should Russia conduct a nuclear strike on Ukraine” and “calls on Russia to immediately cease its threats of a nuclear escalation, given the global consequences of any nuclear catastrophe for human life and the environment for decades to come.”

Any attempt by Russia “to present attacks on occupied territories as an attack on Russia and thus as grounds for a nuclear attack is illegal and baseless and will not deter the European Union from providing further assistance to Ukraine in its self-defense,” the EU resolution reads.

In that instance, the EU is referring to the “hastily organized sham ‘referendums’” concluded Sept. 27 that Putin claims overwhelmingly voted for the inclusion of Donetsk, Kherson, Luhansk, and Zaporizhzhia regions into Russia.

The vote totals were “pre-ordained and unrealistically high percentages of voter turnout and approval ratings for annexation by Russia; whereas the voting process included systemic abuses of human rights and intimidation, notably the presence of armed Russian soldier,” the EU resolution states.

We laid out the possibility that Putin was orchestrating these circumstances to justify the use of a nuclear weapon in this previous piece, although experts maintain the chances of that happening are low.

Meanwhile, the threat of a nuclear weapon being used by Russia seems to be top of mind for President Biden. Last night he went as far as warning how close we are to potential nuclear armageddon and how he doesn’

Finland continues to provide military aid to Ukraine, at least in the form of mortar bombs. In the video below, a Ukrainian soldier fires a 120mm high-explosive mortar that is reportedly a JVA 1571 from Sweden.

Finland’s Prime Minister remains no less supportive of the Ukrainian war effort. In a mic-drop moment, Finnish Prime Minister Sanna Marin gave the following answer when asked for a “way out of the conflict.”

Vladimir Putin’s 70th birthday is today, and Ukrainian Minister of Defense Oleksii Reznikov had some choice words for him. He posted a video to social media, seen below, saying that Ukrainian President Volodymyr Zelensky was visiting frontline troops, is “with his army.” He then asks Russian troops, “where is yours?”

The differential between armies goes deeper than that. Ukrainian soldiers in the video below are chowing on food fit for a Whole Foods in the U.S. There is fresh-looking sushi and borscht, a Slavic delicacy. The troops and the table setting are clean. They seem in a good mood, and a lot of food is spread on the table.

Contrast that with the video below of Russian conscript soldiers heading out of Yakutia on a bus. The man shows his mobilization kit, which consists of the first aid kit for a car, sanitary pads to stanch bleeding from gunshot wounds, and a single chocolate bar.

Ukrainian servicemen were filmed using a U.S.-supplied M113 armored personnel carrier sporting a Browning M2 heavy machine gun. The APCs are a Vietnam-era technology and are not considered survivable against modern anti-armor weapons. The U.S. Army and Marine Corps have relegated mainly them to behind-the-lines duty. Ukraine’s use of them in offensive operations speaks to the inability of Russian forces to counter their advance and the fact that shrapnel from artillery, which these APCs are capable of defeating, remains a big risk to Ukrainian troops.

Despite that risk, Ukrainian troops appear undeterred by Russian efforts to halt their advance. In the video below Ukrainian troops are seen calmly driving down a rain-soaked road pocked by visible Russian anti-materiel mines.

In a weird turn of events, Iran claims it never supplied kamikaze drones to Russia, which The War Zone has reported on extensively. Tehran “has never sent and will never send” any weapons to Russia for use in its war against Ukraine, Tashim News Agency reports, citing Iranian Foreign Minister Hossein Amirabdollahian.

There is a pile of evidence, including full-on captured drones, that Iran did indeed supply these weapons to Russia and did so en masse. The denial is absurd, even for Iran.

You know who is definitely using kamikaze, or “suicide,” drones in Ukraine? The Ukrainians. More evidence of the U.S.-made-and-supplied Switchblade 300 kamikaze drone recently hit online. In the video below, you can see the deployment of the forearm-size loitering munition, the control device, and two Ukrainian soldiers deciding on where to aim what is a flying shotgun blast.

On Friday, multiple news outlets reported outages of the Starlink satellite internet constellation over some parts of Ukraine. There has been a lot of back and forth between some Ukrainian units who claimed “acute” Starlink outages in the south and east. “Another Kyiv official said the connection failures were widespread and prompted panicked calls from soldiers to helplines,” the Financial Times reported.

But some soldiers who used the Starlink communication devices said they worked fine in most places.

Elon Musk, the founder of SpaceX, which owns Starlink, responded to the story, saying only that his company has donated satellite communication devices to Ukraine at an $80 million loss. “As for what’s happening on the battlefield, that’s classified,” Musk said. Disabling Starlink around Ukraine would be a massive win for Russia, even if just temporarily, as the technology has been an essential means of communication on and off the battlefield in Ukraine.

It’s also possible that Ukrainian forces are almost literally outrunning the internet as they advance in specific sectors of the front. Starlink may have internet provider filters that prevent it from operating in some Russian-occupied territories. Several experts in this field have opined on that possibility, as seen below.

Although almost all the accounts are from anonymous sources, several media outlets are saying Putin has lost control of his cabal as the war goes increasingly off-the-rails for Russia. Much palace intrigue is spilling into the mainstream media about Putin’s “destructive personality” playing various factions of his government and military regime against one another.

The Washington Post reports that a member of Putin’s inner circle confronted him over his handling of the conflict, an incredible breach of Kremlin protocol.

Newsweek reports that Putin has “lost control” of his elite cadre of Russian oligarchs. “If Prigozhin is using Wagner to stage videos to undermine Shoigu, then Putin really has lost control of the situation,” Bellingcat founder Eliot Higgins told the magazine.

Now the Russian-installed leader of the Kherson region, which Ukraine is rapidly recapturing, says Sergei Shoigu, Russia’s top uniformed officer, should “shoot himself,” according to the Jerusalem Post

While Russia’s airpower has been an abject failure in its invasion, the country’s combat aircraft are still active, such as these two Su-35s on a dumb-bomb-dropping mission.