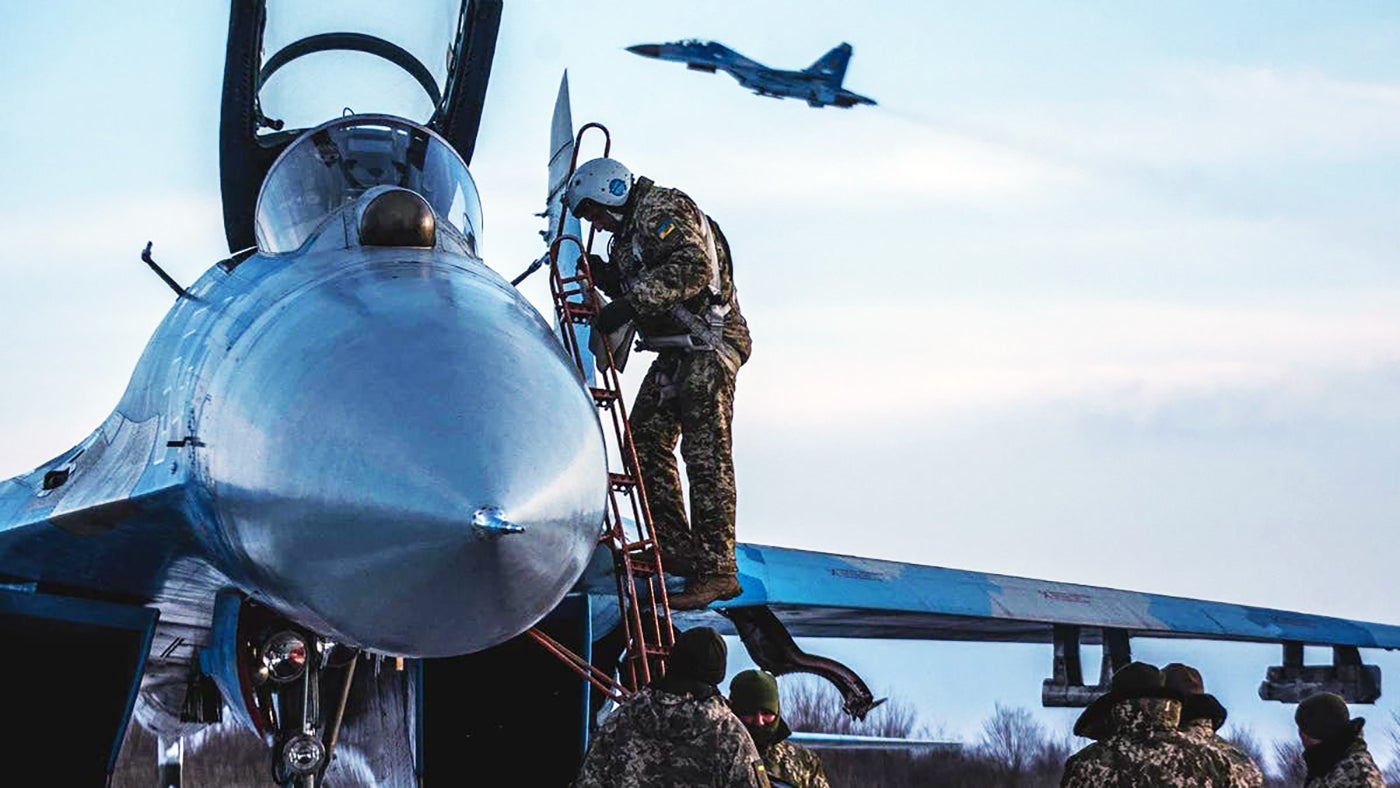 Ukrainian pilots have visited the U.S. and the specific type of aircraft to be provided to Ukraine has already been selected, the top spokesman for the Ukrainian Air Force claimed on Tuesday.

“Our military pilots went to the United States, funds were allocated for the training of our pilots,” Ukrainian Air Force spokesman Yuri Ignat said, according to ArmyInform an information agency of the Ministry of Defense of Ukraine (MoD). “The type of aircraft, which is likely to be provided to Ukraine, and the corresponding terms of [personnel] training have already been determined.”

Ignat did not say which aircraft had been selected or offer any timeline for delivery or training.

But a Ukrainian defense and military expert in Kyiv told The War Zone on Tuesday that “based on the concept of the Ukrainian Air Force development, we are looking for a multi-role aircraft during the first phase. It could be some variant of the  F-16 fighter jet.”

That lines up with what Ignat previously told Air Force Magazine. He said that two 12-aircraft squadrons of F-16s, plus reserves, would be sufficient to help turn the tables against Russian airpower.

Ukraine, Ignat told the magazine, has at least 30 pilots with sufficient English-language skills ready to travel to the United States for fighter pilot training along with the corresponding engineers and maintenance teams, he said.

“To learn the first stage of takeoff and landing and flying from point A to point B, it will take a few weeks, but to learn how to fight on it, to learn how to use missiles, we will take around six months,” Ignat said by videoconference from Ukraine’s Air Force headquarters in Vinnytsia, Ukraine. This is a reality The War Zone has stressed repeatedly.

Ignat said the Ukrainian Air Force flies in squadrons of 12 aircraft, and it believes two F-16 squadrons plus reserve platforms would turn the tide of the war with Russia.

That transfer would require U.S. approval and on Tuesday, the Pentagon’s top spokesman told The War Zone he didn’t “have anything to announce on that front.”

“I’m not aware of any Ukrainian pilots currently training in the United States, to my knowledge, despite what those foreign press reports are saying,” Air Force Brig. Gen. Pat Ryder told The War Zone during a Tuesday afternoon press conference. “Nor, again, do I have anything to announce when it comes to aircraft. As we’ve said all along, we’re going to continue to have a robust discussion with the Ukrainians on what their defense needs that includes the near term, the medium term and the long term.”

The Netherlands raised, then walked back the possibility it might provide Ukraine with F-16s.

Modern Western fighter jets have also long been one of the most in-demand items as far as Ukraine is concerned, but so far no concrete commitments have been made. Assistance in terms of fighter aircraft has been limited to air-launched weapons as well as spare parts for existing aircraft that are already in Ukraine’s arsenal.

The source of any funding to train Ukrainian pilots in the U.S., meanwhile, is unclear.

Though the U.S. House of Representatives version of the 2023 National Defense Authorization Act called for funding to start training Ukrainian pilots on American fighter jets, specific wording about that did not appear once the act was signed into law by President Joe Biden last December.

We’ve asked the Ukranian Defense Ministry and the U.S. Air Force for more clarity and will update this with any information provided.

Before we dive into the latest updates from Ukraine, The War Zone readers can get caught up on our previous rolling coverage here.

The U.S. government is getting closer to announcing that they will be giving dozens of M1 Abrams tanks to the Ukrainian armed forces, according to a growing number of media reports. This comes as authorities in Poland have now formally requested approval from their counterparts in Germany to re-export Leopard 2 tanks to Ukraine. Officials in Germany have reportedly said that they would only sign off on such a deal if the Americans green-lit a transfer of Abrams. You can read more about the latest on tanks for Ukraine here.

The United Kingdom was the first ally to come through with modern tanks for Ukraine. London promised to send 14 Challenger 2 tanks to Kyiv. And you can see a little of what this line of tanks is capable of in the video below.

On the battlefield, the bulk of the heaviest fighting is again taking place in the Donbas, though Russians appear to also be increasing their efforts in Zaporizhzhia Oblast ahead of any potential Ukrainian push toward Crimea. And all this takes place against the looming threat of a new Russian offensive in the coming months. Here are some key takeaways from the latest Institute for the Study of War assessment:

After several months of bloody, brutal fighting that has cost a lot of Ukrainian lives and equipment, US and Western officials are urging Kyiv to shift its focus from the eastern city of Bakhmut and prioritize instead a potential offensive in the south, using a different style of fighting that takes advantage of the billions of dollars in military equipment recently committed by Western allies, US and Ukrainian officials told CNN.

Regardless of how they pursue the war, Ukrainian troops will need more 155mm artillery shells.

To meet that need, the Pentagon is racing to boost its production of artillery shells by 500 percent within two years, The New York Times reported, “pushing conventional ammunition production to levels not seen since the Korean War as it invests billions of dollars to make up for shortfalls caused by the war in Ukraine and to build up stockpiles for future conflicts.”

The effort, which will involve expanding factories and bringing in new producers, is part of “the most aggressive modernization effort in nearly 40 years” for the U.S. defense industrial base, according to an Army report.

Preliminary findings in the investigation of the deadly Jan. 18 helicopter crash in Brovary point to pilot error, according to the Ukrainian Strana Today news agency, citing sources in the Ministry of Internal Affairs.

According to the sources, “the pilot of the helicopter was flying too low in conditions of limited visibility – that day there was heavy fog – and noticed the high-rise building too late,” Strana Today reported. According to one of Strana’s sources in the Ministry of Internal Affairs, “the pilot chose this route because of fears of missile attacks from Belarus.”

The crash of the H225M helicopter killed Ukraine’s Interior Minister, Denys Monastyrsky and everyone else on board. More than a dozen other people, including a child on the ground also died.

Ukrainian President Volodymyr Zelensky on Tuesday said his country is not planning to attack Belarus. He was responding to comments made by Belarusian President Alexander Lukashenko that Ukraine is training “extremists and militants” on its territory to attack its neighbor to the north.

“You hear everything that Ukraine officially offers. We are not going to attack Belarus and have not planned to,” Zelensky said at a press conference Tuesday, following a meeting with the President of the Republic of Finland, Sauli Niinistö in Kyiv, according to the Ukrainian United24Media Telegram channel. “There are no such intentions. And this is the main signal from the entire Ukrainian people.”

“It is very important for us that Belarus does not lose its independence and does not enter into this shameful war despite the influence of anyone,” Zelensky told reporters, according to the Odessa Journal.

Zelensky’s comments were in response to statements made earlier on Tuesday by Lukashenko that Ukraine was pursuing a non-aggression pact with his country despite taking threatening actions.

“I don’t know why Ukraine needs this,” Lukashenko said, according to the official Belarusian BelTa news agency. “On the one hand, they ask us not to send troops to Ukraine. They suggest a non-aggression pact. On the other hand, they are preparing this explosive mixture and arming them.”

Russia has used its client state of Belarus to attack Ukraine on the ground during the initial phase of its all-out war on Ukraine. Since then, Russia has launched piloted aircraft and drone and missile attacks against Ukrainian cities from Belarus.

But despite that and an increase of Russian troops in Belarus to take part in a joint training exercise, there appears to be no imminent threat of an attack on Ukraine, according the Ukrainian Defense Intelligence Directorate (GUR).

“Escalating the topic of an immediate military threat from Belarus…is, in fact, a Russian informational and psychological operation,” GUR spokesman Andrii Yusov said on Sunday. “Of course, we know everything about dictator Lukashenko, about the regime in Belarus.”

Based on the intelligence the GUR has gathered about the number of Belarusian of strike groups, the readiness of forces and means, and other information, it’s determined that “today there is no threat of a full-scale ground operation and participation on the side of Russia from Belarus,” Yusov said.

Should that change, however, “Ukraine is ready and has worked out all scenarios. It is in the interests of Putin and the so-called Russian federation to escalate the issue from Belarus as much as possible. But even dictator Lukashenko doesn’t really go along with it.”

Zelensky on Tuesday said his country is prepared for any challenges from or through Belarus.

Russia and Iran continue to cozy up as both nations have mutual interests against a mutual adversary in the U.S. and its allies.

On Monday, the Chairman of the State Duma Vyacheslav Volodin met with the President of the Islamic Republic of Iran Seyyed Ebrahim Raisi in Tehran, according to the official Duma website.

The Chairman of the State Duma noted “dthe necessity of development of the parliamentary dimension to provide legislative support to the decisions taken by the leaders of the states.”

“Western dictatorship can only be countered by the freedom of development of countries and nations, in this regard, the preservation of sovereignty and independence is really important for our two states,” Volodin said.

What went unmentioned is what, if any kinds of arms deals the two nations discussed.

There had been recent indications that – as part of that growing relationship – Iran would receive Russian-made Su-35 Flanker-E fighters this year. The assessment was based on a program to teach a tranche of Iranian pilots to fly the Su-35 that took place in Russia in the spring. That training is part of what American authorities have said is an “unprecedented” degree of military and other technological assistance flowing from Moscow to Tehran that is tied, at least in part, to Iran’s support for Russia’s war in Ukraine, including deliveries of kamikaze drones. You can read more about that here.

We’ve written about the tough fighting in and near Soledar, a mining town in Donetsk Oblast. This video below shows what it looks like.

Here’s something you don’t see every day, a Russian BMP-T “Terminator Infantry Fighting Vehicle working alongside a Russian tank.

Despite the hardships of 11 months of full-own war, Ukrainian troops are doing what they can, when they can, for self-care.

And finally, thanks in no small measure to the ongoing war in Ukraine, we are on the eve of destruction.

The Bulletin of the Atomic Scientists, which, since 1947, has been estimating how close the world is to ending by stating starkly how many “minutes to midnight” remain on its signature Doomsday Clock, The New York Times reported.

The clock on Tuesday was set at 90 seconds to midnight, the closest to midnight it has ever reached, according to the Bulletin, a nonprofit organization and publication.

That’s it for now. We will update this story if there is anything major to add.