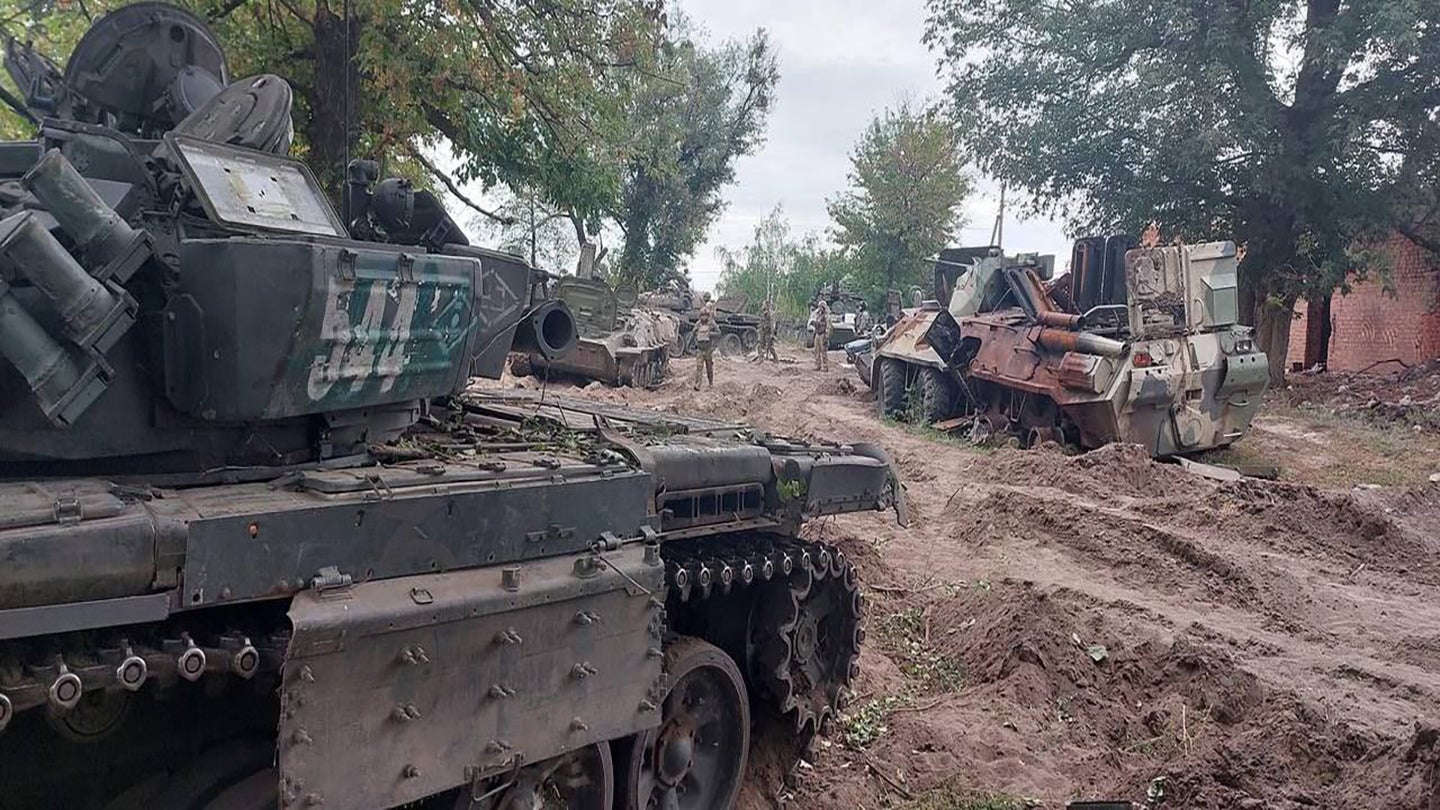 Russia abandoned more equipment during its hasty retreat from the Kharkiv Oblast. via Twitter

Now 201 days into Russia’s full-on invasion, Ukraine’s military is starting to consolidate the sweeping advances it is making in both the Kharkiv and Kherson oblasts.

There have been overwhelming battlefield successes, with Ukraine recapturing about a Delaware’s worth of territory once seized by Russians.

And even Russian-backed officials have admitted Moscow’s forces were swamped by the Ukrainian blitzkrieg. It is an advance that has Ukraine forces pushing close to the border with Russia.

“A counteroffensive liberates territory and after that you have to control it and be ready to defend it,” Reznikov said in an interview with the Financial Times newspaper published on Monday. “Of course, we have to be worried, this war has worried us for years.”

Reznikov added that the nearly simultaneous counter-offensive around Kherson was making slower progress because it was an agricultural region “with irrigation channels” the Russians could use as defensive trenches, FT reported. Casualties there have reportedly been heavy and Ukraine’s general staff said 1,200 Chechen soldiers had been deployed to reinforce Russian positions. Reznikov said the Chechens were being used to stop frontline troops from deserting their positions.

Reznikov said Ukrainian troops were tired after the six-day attack but morale was high because “it’s a sign that Russia can be defeated.”

Reznikov also cautioned that Russian reinforcements could launch a counter-attack on Ukraine’s stretched supply lines and that those forces could also be encircled by fresh Russian troops if they advanced too far.

Russia’s defense ministry acknowledged on Saturday that its forces had pulled back from the strategic city of Iziyum, claiming it had decided to “regroup” and transfer them southeast to the Donetsk region.

The Ukrainian advance has been met with great joy by that nation’s citizens and troops.

“The operation continues – not only in the east, but also in the Kherson region,” Arestovich said Monday on his Telegram channel. “The phase of a breakthrough, rapid advance, tsunami was replaced by a phase of consolidating the results and fighting for the occupation of the most advantageous lines – as springboards for the next jumps.”

But such moves might not be immediate, he said.

“For an offensive, conditions and resources are needed, and they are not created in one day,” Arestovich said.

Still, the “results of the tsunami in the east are brilliant,” he said, adding that enough equipment was captured “to fully provide for our new mechanized, and even tank brigade.”

His claim about new equipment appears to be backed up by an avalanche of social media postings that show Ukrainian forces with more captured Russian equipment.

Heavier weapons provided by the U.S. and its allies and partners continue to be a huge factor in Ukraine’s success, the Institute for the Study of War says.

“Ukrainian forces have inflicted a major operational defeat on Russia, recapturing almost all Kharkiv Oblast in a rapid counter-offensive,” the Institute for the Study of War said in its latest assessment, issued Sunday.

“The Ukrainian success resulted from skillful campaign design and execution that included efforts to maximize the impact of Western weapons systems such as [the M142] HIMARS,” ISW reported. “Ukraine’s armed forces employed HIMARS and other Western systems to attack Russian ground lines of communication (GLOCs) in Kharkiv and Kherson Oblasts, setting conditions for the success of this operation.”

ISW, which has cast shade on Russian claims that it was repositioning, not retreating, said that the “Ukrainian recapture of Iziyum ended the prospect that Russia could accomplish its stated objectives in Donetsk Oblast.”

The Pentagon on Monday said Russia has given up much of the ground it gained in the north and east.

“We assess that Russian forces have largely ceded their gains to the Ukrainians and withdrawn to the north and east,” a senior U.S. military official, speaking on condition of anonymity, told reporters Monday afternoon. “Many of these forces have moved over the border into Russia.”

The Russians “continue to focus effort from Siversk to Bakhmut,” the official said. “Bakhmut continues to appear to be the focus of where Russian forces are trying to gain ground and you see heavy use of artillery and airstrikes.”

The official also said that “Ukrainian forces have very likely taken control of Kupiansk and Izyium, in addition to smaller villages. Notably, we’re aware of anecdotal reports of abandoned equipment, Russian equipment, which could be indicative of Russia’s disorganized command and control.”

Near Kherson, “we continue to see deliberate and calibrated operations by the Ukrainian to include some moderate force movements,” the senior military official said.

As for whether Ukraine was in a consolidation mode, the official declined comment, deferring to Ukraine officials.

Before we get into the highlights from the past 48 hours, check out our previous rolling coverage here.

As Russia retreated across the Kharkiv and Kherson oblasts, it lashed out with a missile strike on the Kharkiv power plant.

Other cruise missiles were apparently launched from just off Sevastopol in Crimea, which Russia occupied in 2014. Sevastopol is also the headquarters of the Black Sea Fleet.

But not all Russian strikes were successful, Ukraine claims. Its Air Force said that nine out of 12 missiles fired Sept. 11 were shot down by its S-300PT air defense systems. This claim cannot be independently verified at this time.

As concerns remain about a radioactive disaster at the Zaporizhzhia Nuclear Power Plant, where the International Atomic Energy Agency (IAEA) said had been damaged by shelling and was the site of stored Russian military equipment, there appears to be some traction for creating a demilitarized zone around Europe’s largest nuclear energy facility.

Given how things are transpiring on the battlefield, there has been some speculation about whether Russian President Vladimir Putin has halted the reinforcement of his forces.

However, a senior U.S. defense official was unable to corroborate that.

“I can’t confirm they are not deploying additional units to Ukraine,” the official, speaking on condition of anonymity, told reporters during Monday’s press briefing.

Regardless of whether Russia is sending more troops, Ukraine has launched an effort to get those still there to surrender. Ukraine’s Security Service has sent out mass text messages to Russian troops with a number they can call if they want to wave the white flag.

Certainly, videos like this one, of the crash of a Russian Su-25SM Frogfoot attack jet, can’t be helping Russian morale.

You can read more about that incident in our coverage here.

Things aren’t much better on the ground, where Ukrainian troops captured an ambush of a Russian vehicle.

Another Russian vehicle was also ambushed, this time apparently by Ukrainian saboteurs.

But Ukraine is also taking losses as well, as this video of an attack on a Ukrainian Buk-M1 air defense system shows. These medium-range SAM systems remain prized assets for Ukraine, at least until the Western air defense systems arrive.

HIMARS and their associated Guided Multiple Launch Rocket Systems munitions are not the only foreign-provided equipment making a difference for Ukraine on the battlefield. Reznikov on Sunday thanked Australia for providing its Bushmaster armored vehicles to his troops.

And from the U.S., it appears the M984A4 Heavy Expanded Mobility Tactical Truck (HEMTT) recovery vehicle may have made its way to Ukraine.

A Russian version of the lumbering wheeled armored vehicle did not apparently enjoy similar success.

The Ukrainians continue to use any means available to carry out their attacks on Russia, including these troops on motorbikes toting British-made NLAW anti-tank weapons.

We wrote about efforts to equip Ukrainian troops with electronic motorbikes back in May, and more recently, Ukrainian anti-tank missile teams using motorcycles with sidecars to leverage their successful hit-and-run attack playbook.

Local Russian media on Monday reported what appeared to be explosions on Russian soil at an airbase in Taganrog as well as other places in Rostov Oblast, which is located around the eastern end of the Sea of Azov.

“Residents of several cities in the Rostov region around 15:15 heard a sound similar to an explosion,” the Russian 161.RU media outlet reported Monday. “Judging by the reports of 161.RU readers and publications on social networks, commotion was heard over a vast territory – from Novoshakhtinsk in the north to Yeysk in the south.”

“Fences shook in some places. In Rostov, in some places, after the clap, car alarms went off. Eyewitnesses report that three or four pockets of black smoke are visible in the Azov region near Peshkovo.”

Social media postings about this began appearing with video claimed to be about the attack, but experts like Aric Toler of Bellingcat and others quickly dismissed those, explaining they were from an August attack on the Saki Air Base in Crimea.

Toler was particularly dubious that any such attack occurred so deep in Russian territory, much further from Ukrainian front lines than Belgorod, which has been attacked in the past. But Ukraine has indeed attacked targets deep inside Russian-held Crimea, using long-range improvized suicide drones and potentially other weaponry and tactics.

A senior U.S. military official on Monday told The War Zone that the Pentagon had no information about any such attacks on Russian soil.