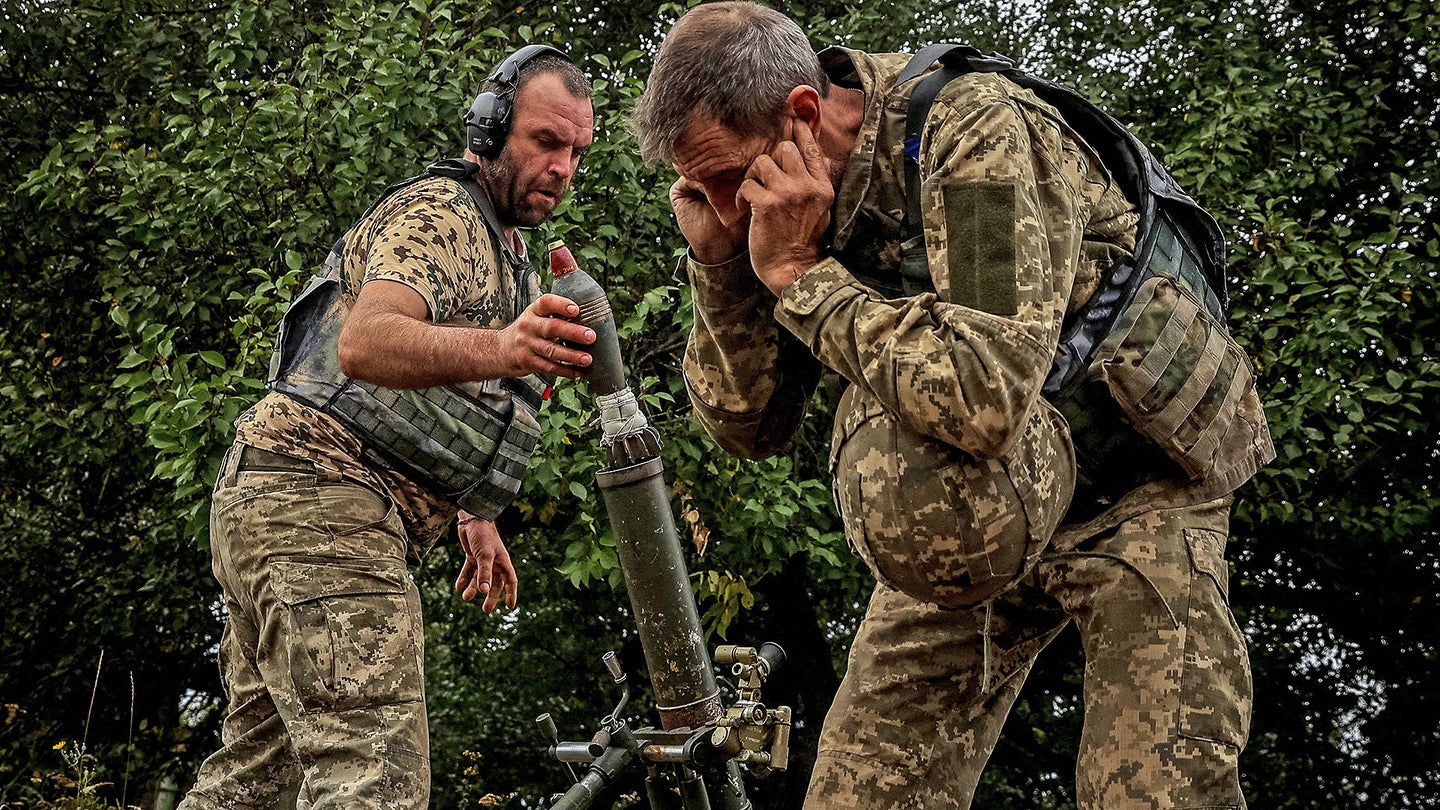 As Russia continues to struggle with widespread negative reactions to President Vladimir Putin’s mobilization of hundreds of thousands of Russians to fight in Ukraine, the war, now 215 days old, rages on.

Though not advancing nearly as quickly as it had during the beginning of its Kharkiv counteroffensive earlier this month, Ukrainian troops are still making some gains. Much of the fiercest fighting is in the Donbas and centers on the towns of Lyman and Bakmut, The New York Times reports.

“Ukraine is pushing hard to reclaim Lyman, a railway juncture that serves as an important supply hub on the western edge of the Donbas. Russian forces control the city, but Ukraine is hoping to use it as a gateway to push farther east and maintain its momentum,” The New York Times reports. “Bakhmut is an entry point to part of the region still held by Ukrainian forces. Capturing it would also give Russia a win after being routed in humiliating fashion in the north. The Russians have been shelling Bakhmut incessantly for the past three months.”

The Institute for the Study of War, a Washington D.C.-based think tank, said it identified “three small changes in control of terrain” over the weekend.

Fighting continues in the east and in the south. Ukrainian forces likely liberated the town of Shevchenko in Donetsk Oblast, likely control Maliivka in Kharkiv Oblast, and are contesting Russian positions around Karpivka, Nove, Ridkodub, and Novoserhiivka in Donetsk Oblast, according to ISW, which said that Russian forces claim to have recaptured Karpivka and Nove on Sept. 25.

But the Russians continue to hit back, both Ukrainian and Russian officials say.

In its latest assessment, the Ukrainian General Staff said that Russian forces are focusing their efforts “on holding the captured territories” as well as trying to fully occupy Donestk Oblast and disrupting gains made by Ukrainian forces.

“During the day, Ukrainian soldiers repelled enemy attacks in the areas of Spirne, Soledar, Pidhorodne, Bakhmut, Mayorsk, Kamianka, Pobyeda and Pavlivka settlements,” according to the Ukrainian General Staff assessment, posted on its Facebook page.

“There remains the threat of air and missile strikes on the entire territory of Ukraine,” according to the Ukrainian General Staff, which said that on Monday, the Russians launched two missile and four air strikes, carried out more than seven attacks with anti-aircraft missiles, and used strike UAVs in the area of ​​Bilenke settlement of Odesa Oblast.

The Russian Ministry of Defense (MOD) claimed a number of artillery and aviation attacks on Ukrainian forces, but no ground gains.

Russian artillery struck Ukrainian positions near Senkovo and Chervony Oskol in the Kharkiv region, the MOD said in its latest assessment. In addition, it said Russian Aerospace Forces struck provisional bases of the International Legion of fighters – who have flocked from around the world to assist Ukraine – as well as Ukrainian troops near Svyatogorsk in the Donetsk Oblast.

The Russian MOD also claimed missile attacks on Ukrainian positions near Chasov Yar in Donetsk Oblast, an attack near Ochakov in the Mykolaiv region and aviation, missile, and artillery attacks on Ukrainian positions near Kupiansk in the Kharkiv Oblast as well as in locations in Donetsk Oblast and near Zaporizhzhya and Kherson.

Before heading into the latest updates from Ukraine, The War Zone readers can get caught up on our previous rolling coverage here.

In August, the U.S. pledged an additional six NASAMS on top of the two previously promised. You can read more about that in our coverage here. Some observers, however, wonder if that is enough as NASAMS provides medium-range, localized coverage that is best suited for critical target areas and cities, not broad coverage over long distances. Regardless, even getting the batteries already promised will take time.

And while grateful for the NASAMS, Zelensky told CBS News reporter Margaret Brennan that he would still like to see Ukraine provided with more tanks from the U.S. and its European allies like Germany.

They may not be tanks, but 50 M113 armored personnel carriers donated by Lituania arrived in Ukraine a few days ago, that nation’s Ministry of Defense said.

Belgium has promised Ukraine M2HB heavy machine guns, ammunition, and other military equipment. Added all up, the equipment is valued at about $11.5 million.

And on top of donations from friendly countries, Ukraine continues to be the beneficiary of Russian battlefield largesse. The Ukraine Weapons Tracker (@UAWeapons) reported two more infantry fighting vehicles captured by Ukraine, a BMP-3 and a BMP-2 in the Kharkiv Oblast.

Ukraine Weapons Tracker also reported that a Russian Army MT-LB with a towed ZU-23-2 23mm autocannon was also captured by Ukrainian forces in the Kharkiv Oblast.

And to go with all the captured weapons, Ukraine has managed to amass a cache of captured ammunition as well. Boxes and boxes of ammunition, which Ukrainian troops have promised to return to sender.

And speaking of ammunition, the Ukrainian Ministry of Defense says its troops are being careful about how they are using the Guided Multiple Launch Rocket System or GMLRS munitions provided by the U.S. to be used with the M142 High Mobility Artillery Rocket Systems, or HIMARS.

Ukrainians are also being cautious with the donated M270 multiple launch rocket systems, which use the same ammo as the HIMARS, as you can see in the video below of the tracked MLRS doing the “shoot-and-scoot” after launching its munitions in an effort to avoid Russian counter-battery fire.

There was also the first confirmed firing of a BGM-71 TOW anti-tank guided missile by Ukrainian forces in the Kharkiv-Lugansk area.

For the first time, the architect of much of Ukraine’s military success has given an interview. Gen. Valeriy Zaluzhny, Ukraine’s top military officer, talked to Time magazine about how he was surprised that he was picked for the job and, after studying Russian military history and doctrine, how he was surprised by his enemy’s failures. Zaluzhny, who helped reform Ukraine’s military by weaning it away from its former rigid Sovietesque doctrine, was one of the earliest and loudest voices sounding the alarm of a pending Russian all-out invasion.

Putin’s mobilization, ordered in the wake of Ukraine’s stunning Kharkiv blitz, continues to rankle Russians and cause consternation abroad.

Throngs of people who were not within the guidelines Putin laid out for ‘partial mobilization’ are being sent to fight. This has infuriated even the most hawkish voices in Russian media and seems to have allowed the realities of Russia’s war of choice to seep into even the most well-cencored Russian programming. The uncanny ability of the usual suspects to lambast the execution of mobilization and recognize the horrible reality of the conflict, while also praising the man who made it happen and continues to double down on it, is remarkable.

Satellite images captured by Maxar Technologies show long lines of cars heading from Russia toward Georgia, attempting to cross the border at the Lars checkpoint.

As of Sunday, videos showed several-mile-long line of cars attempting to head from Russia toward Georgia.

Russia, however, appears to be cracking down on this mass exodus, sending troops to the border to set up checkpoints to stop the outflow of military-aged men.

Meanwhile, in the Russian Republic of Dagestan, which is on Georgia’s eastern border, locals continue to be outraged by the mobilization. Video has emerged on Twitter of what’s claimed to be parents of mobilized children blocking the main road to a regional capital.

Women in Dagestan told police that they are opposed to the mobilization because Russia attacked and now occupies portions of Ukraine.

Muslims in Dagestan, furious that they are being singled out during this effort to rebuild the Russian military, are also expressing disgust with Putin’s mobilization.

The outrage was even more extreme in the Siberian region of Irkutsk, where Guardian reporter Andrew Roth said a Russian man shot and killed the military commandant in the draft center of the city of Úst-Ilimsk.

Russian mobilization evaders, however, seem to have no problem getting into Finland, with some 17,000 Russians entering that country, a jump of 80% from the previous weekend.

Despite the protests, shooting and mass exodus, Moscow has yet to make a decision on closing the borders or introducing martial law, said Kremlin spokesman Dmitry Peskov.

How much of a difference all these additional troops will make remains doubtful, at least according to Kyiv. The Ukrainian General Staff says the conscripted troops are heading directly to the frontline with no training

While a lot of people are racing to get out of Russia, one well-known individual was just granted Russian citizenship. Putin on Monday granted former National Security Agency contractor Edward Snowden, who first arrived in Russia in 2013 after leaking secret files that revealed a vast web of domestic and international surveillance by the U.S. government. The Kremlin subsequently granted him asylum, even as the U.S. pursued espionage charges.

And in another sign of the former Soviet Union’s declining influence over its former republics, Kazakhstan said it would not recognize the upcoming referendums in Donetsk, Kherson, Luhansk and Zaporizhzhya on annexation to Russia, a move widely condemned by Ukraine, the U.S. and its allies.

The rush of bad news may have gotten to one Russian soldier, who was seen in this video below approaching Ukrainian troops while carrying a Russian flag. It probably didn’t end well for him.

Finally, Iranian-built suicide drones continue to be a growing problem for Ukraine as they can strike virtually anywhere and are hard to spot and shoot down. Another wave of the drones descended on various targets on Saturday evening.