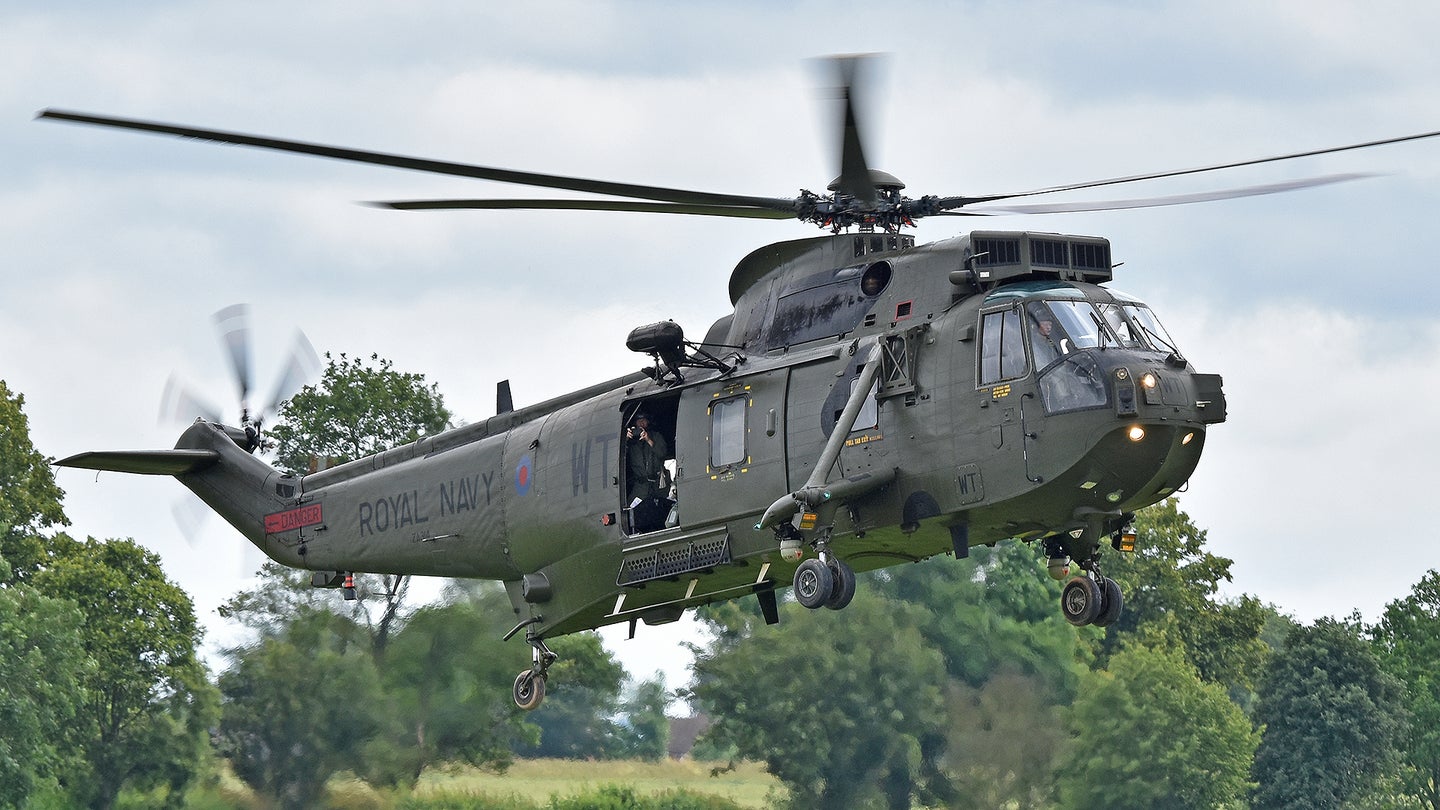 The United Kingdom is sending three WS-61 Sea King helicopters, plus 10,000 artillery rounds to Ukraine in that nation’s latest aid package to Kyiv.

The “Sea King helicopters arrive in Ukraine to provide key search and rescue capabilities,” the U.K. Defense Ministry (MOD) announced in a media release Wednesday. The first of those aircraft have already arrived in Ukraine, the U.K. MOD told The War Zone Wednesday afternoon.

Ukrainian officials have long been asking for aviation assets. The U.S., for instance, has provided 20 Mi-17 helicopters to Kyiv. But there have been cautions raised by the Pentagon and elsewhere about providing more sophisticated fixed-wing aircraft like F-16s, for instance, in part out of concern over the training it would take Ukrainian pilots to learn how to employ them. In this case, the Royal Navy provided a six-week program of Sea King training in the U.K. for 10 crews of the Armed Forces of Ukraine and associated engineers.

The Sea Kings are a modified version of the Sikorsky S-61, widely used in the past by the U.S. military and civilian aviation as well. The VH-3D variant still serves in the role of Marine One when the president is aboard and the type served with the State Department in Afghanistan and Iraq.

Starting in 1959, Sikorsky Aircraft produced hundreds of aircraft based on the original S-61. The last S-61 was produced by Sikorsky in 1980 but licensees in Great Britain, Japan, Canada, and Italy produced an additional 679. It is estimated that up until 2010 S-61s had flown more than 24 million hours in military service and civil use. They were produced by Westland Britain for over two decades and featured some local components.

The Sea Kings were flown by the Royal Navy and Royal Air Force. They were used for anti-submarine warfare, search and rescue, utility/transport, and airborne early warning, Tom Longo, a retired Marine helicopter pilot, told The War Zone. The last one was retired in 2018, he said.

The Royal Navy declined to tell The War Zone how the Sea Kings will be outfitted, citing operational security concerns.

Given the rate that Ukraine has been using artillery, 10,000 more artillery rounds will also no doubt be appreciated by Kyiv.

“Our support for Ukraine is unwavering,” U.K. Defense Secretary Ben Wallace said during a visit to Norway. “These additional artillery rounds will help Ukraine to secure the land it has reclaimed from Russia in recent weeks.”

In Kyiv, 80% of consumers are without power, Kyrylo Tymoshenko, deputy head of Zelensky’s office, announced on his Telegram channel Wednesday.

The situation is so dire that Kyiv Mayor Vitali Klitschko warned that a worst-case scenario could require the partial evacuation of the capital.

Still, Kyiv residents are managing to keep, as the British would say, a stiff upper lift. Some musicians serenaded the public with a rendition of Frank Sinatra’s My Way.

“The vast majority of enemy missile strikes have recently been aimed at energy infrastructure facilities,” said Ukraine’s Deputy Defense Minister Hanna Malyar. “These are attacks primarily on the civilian population, which is as indomitable as our military. Attacks on the energy industry will not help Russia strengthen its position in this war. The destruction of energy infrastructure facilities will not affect the ability of our defense forces to stop the enemy and liberate temporarily occupied territories.”

The Ukrainian military, she said, “is ready to conduct hostilities in any conditions. Likewise, it will not weaken the motivation of the civilian population. The enemy is mistaken if he believes that the destruction of the energy infrastructure will direct the efforts of Ukrainians mainly to protect the rear and distract from the front in the east and south. We have a front everywhere today. And the civilian population fights the enemy in the same way as the military – also on all fronts. The country is more united than ever. Now there is no need to comfort someone and inspire them to continue the struggle. Everyone is motivated and confident in our victory.”

In Kherson City, which has no electricity, citizens were forced to charge their phones at the train station.

On Tuesday, Ukrainian President Volodymyr Zelensky announced the creation of thousands of “Points of Invincibility,” where citizens can go to get heat, power, mobile communications, internet service, water, and first aid. Out of 4,000 such centers prepared, more than 800 were activated Wednesday, Tymoshenko said.

On Wednesday, Zelensky proposed that the United Nations Security Council adopt a resolution condemning any form of energy terror.

“I confirm the invitation from Ukraine regarding the mission of UN experts to the critical infrastructure facilities of our country that have been or may be hit by Russian missiles,” he said on his Telegram channel. “Damage and destruction must be properly assessed. It should be noted that these are blows to the very infrastructure that supports the lives of tens of millions of people.”

Bridget A. Brink, the U.S. Ambassador to Ukraine, condemned this latest round of attacks.

All told the Russians launched about 70 Kh-101 and Kh-555 Kalibr cruise missiles, according to the Ukrainian Ministry of Defense (MOD). The launches were carried out by 10 Tu-95MS Bear missile-carrying bombers from the Rostov region in Russia and the Caspian Sea, as well as from two small missile boats from the Black Sea, according to the Ukrainian MOD. Of those, 51 missiles were destroyed by Ukrainian air defense. In addition, five Lancet attack drones were destroyed in the south of the country.

The Ukrainian effort to liberate the Kinburn Spit, the last Russian-held territory in the Mykolaiv Oblast in southern Ukraine is still underway, Vitalii Kim, head of the Mykolaiv Oblast Military Administration told reporters Wednesday at the Ukraine Media Center. You can read more about that operation here.  If successful, it will, among other things, allow the port of Mykolaiv on the South Bug River to be included in the Black Sea Grain Initiative, hammered out over the summer to allow grain and other food and fertilizer to be shipped out via Ukraine’s Black Sea ports of Odesa, Chornomorsk and Yuzhny, Kim said.

There have been no major changes elsewhere on the battlefield, with fierce fighting continuing in the Donbas. Here are some key takeaways from the latest Institute for the Study of War assessment.

The Department of Defense (DoD) on Wednesday announced the authorization of a Presidential Drawdown of security assistance valued at up to $400 million to meet Ukraine’s critical security and defense needs.

Capabilities in this package include:

•    Spare parts for 105mm Howitzers and other equipment.

The European Parliament on Wednesday adopted a resolution recognizing Russia as a “state sponsor of terrorism.”

That designation was welcomed by Zelensky.

But afterward, the European Parliament was hit with a cyber attack.

Former British Prime Minister Boris Johnson dished on the attitude of European Union nations at the beginning of Russia’s full-on invasion, saying the Germans thought “it would be better if Ukraine fell.”

“We know that the very entertaining former prime minister always has a unique relationship with the truth; this case is no exception,” the official said, according to The Guardian.

Even as Ukraine is fighting in the south and east of the country, it is building up defensive lines around Kyiv.

There was another prison exchange between Ukraine and Russia on Wednesday, with 35 people from both sides heading back home.

Meanwhile, in Russia, the mobilization of reservists looks like it will continue.

And it appears that there is no end as well to complaints about how they are treated once in uniform.

Months after the devastated city of Mariupol was finally captured by Russians, images are emerging of what the infamous Azovstal steel plant, the last stand for Ukrainian defenders of that city, looks like now. In April, we interviewed one of those soldiers, which you can can read about here.

Russia is still unleashing destruction, in this case a barrage by a BM-21 Grad multiple launch rocket system.

Russian troops ran, but not all could hide from a Ukrainian drone-dropped munition.

And near Bakhmut, a Russian soldier was apparently blown through the air in a trench.

And during that bloody siege in Donetsk, a Ukrainian ballet dancer named Vadym Khlupyaanets was killed. He was 26.

That’s it for now. We at The War Zone wish all a happy Thanksgiving.