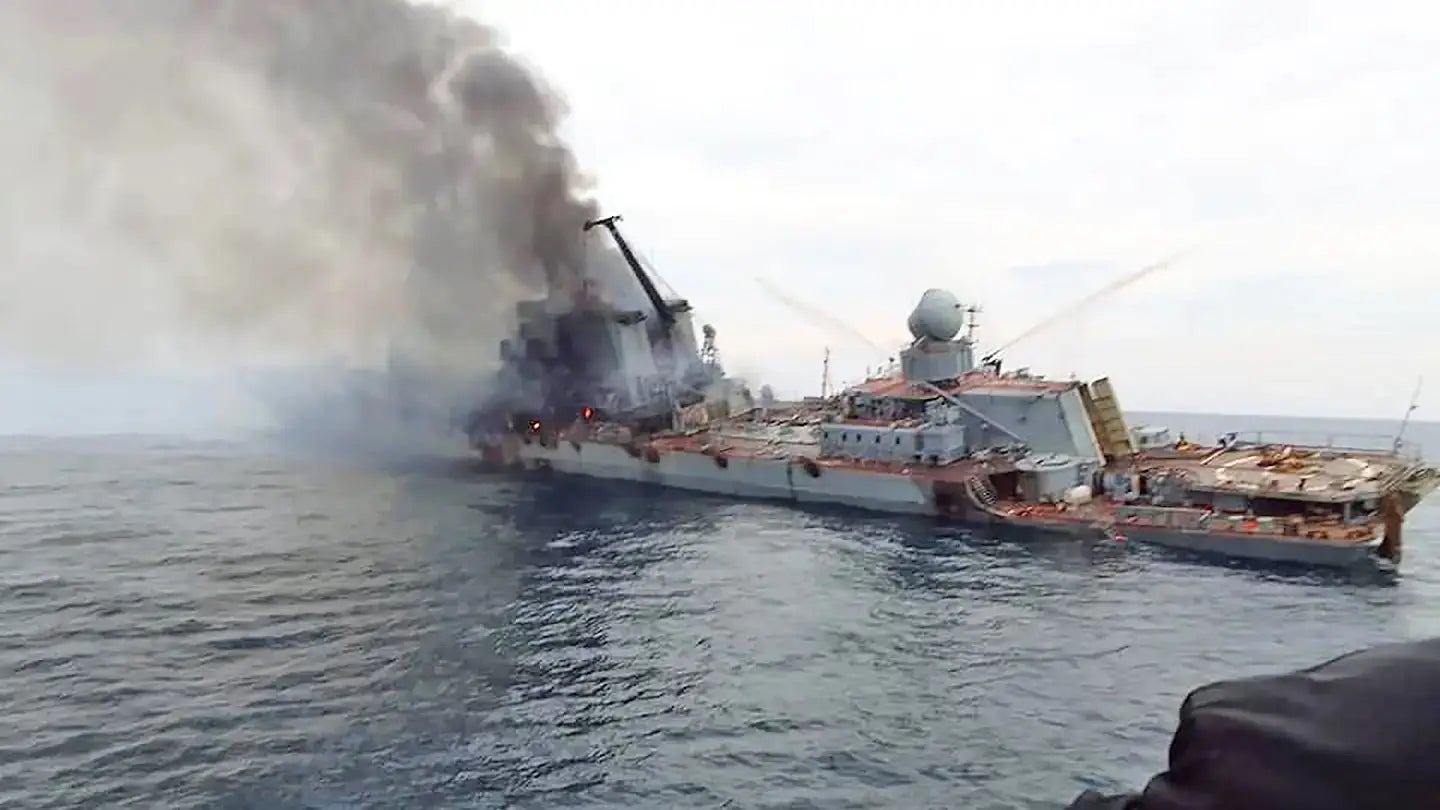 Russia’s cruiser Moskva, the flagship of its Black Sea Fleet, was sunk on a rainy overcast day that may have provided just the right conditions for two Ukrainian missiles to reach the ship and sink it, according to a detailed account of the operation published in Ukrainian Pravda.

The 40-year-old Slava class cruiser was struck with two Neptune anti-ship missiles in April, eventually causing the vessel to explode and sending it to the bottom of the Black Sea. Ukrainian Pravda, or UP, conducted extensive interviews with Ukrainian soldiers who launched the domestically produced Neptune missiles from the Odesa region.

UP’s account says Neptune missiles were fired at other ships very early in the conflict. The first targets were three Russian amphibious troop ships steaming from Crimea to the Mykolaiv region, but Russian air defense systems intercepted those munitions. Still, the launches surprised the Russian Navy, as the Ukrainian military was not thought to possess operational shore-based anti-ship missiles in February, according to UP.

The outlet also published a photo of the launch of one of the two missiles that struck Moskva, as seen below.

On April 13, a single Neptune battery picked up a large object about 120 kilometers from the coast with its targeting radar, suggesting the presence of a Russian warship, according to the report. It is likely Moskva’s crew was satisfied that the cloud cover and rain would conceal the ship’s presence from Ukrainian radars, UP said. The weather also aided the Ukrainians’ radar, which was incapable of seeing beyond the horizon, UP reports.

“Due to the fact that there were dense clouds over the sea, the signal from the radar reflected from them to the surface of the water, and from the water back to the clouds,” a source explained to the news outlet.

“At the time of the invasion, we did not have over-the-horizon radars, and Russia knew about it. But since the clouds were very low and the signal from this corridor between the water and the clouds had nowhere to go, the radar unexpectedly reached Moskva,” the source said.

So sure was the Russian Navy that Ukrainian weapons could not see, or at least not reach, the Moskva, that the crew is thought to have not activated the ship’s air defense systems, according to the report. Ukrainian forces launched two missiles at the target, which they reached in about six minutes. But, given the weather and other operational considerations, Ukrainian drones were not scrambled to confirm whether the missiles hit the ship, UP reports. A storm developed, which hampered other ships from reaching the stricken vessel, however. When the storm subsided the next day, Ukrainian forces confirmed that the missiles had hit Moskva, which eventually sank while being towed to port.

We must stress that this is just the account of the events as reported by UP. There are parts of it that are certainly intriguing that require further inquiry. We cannot verify it at this time, but it is an interesting narrative of events that day, which was a major milestone in the conflict and one of the largest naval losses in 40 years. UP‘s account appears only in Ukrainian on its website and was entered into Google Translate for this story.

As the war enters its second winter and nears its tenth month, a lot is still transpiring on the ground. Before we get into the details, catch up on our previous rolling coverage here.

Russia continues its push westward toward Bakhmut, though Ukrainian lines in that region of the country’s northeast continue to hold. The map below from the U.K. Ministry of Defense shows the situation on the ground on Dec. 13.

Ukrainian forces continue to strike military targets inside Russia. As seen in the video below, a large munitions carved out a massive crater at what is reported to be the main base of the Russian 488th Motor Rifle Regiment in Klintsy, Bryansk Oblast in Russia. The base is beyond the Russian border north of Ukraine, between it and Belarus. At least two damaged tracked combat vehicles – one flipped completely over – are also seen.

At Russia’s Engels Air Base deep inside Russia that was recently attacked by Ukraine, personnel appear to have spelled out “Death To The Nazis” with equipment just for satellite images to pick up, as seen in the The War Zone‘s latest Downlink.

Air raid alerts were issued for the entire country of Ukraine, including Russian-occupied Crimea, on Dec. 12.

Russian President Vladimir Putin on Dec. 12 announced he would not hold the annual end-of-year press conference that has been a staple of his regime for at least a decade.

“The press conference has become a significant fixture in Putin’s calendar of public engagement and has frequently been used as an opportunity to demonstrate the supposed integrity of Putin,” according to the U.K. MoD’s latest intelligence assessment of the war. “Although questions are almost certainly usually vetted in advance, the cancellation is likely due to increasing concerns about the prevalence of anti-war feeling in Russia. Kremlin officials are almost certainly extremely sensitive about the possibility that any event attended by Putin could be hijacked by unsanctioned discussion about the ‘special military operation.’”

Using up as many as 60,000 artillery shells a day at some points in the war, Russia has burned through about 10 million of the 17 million rounds of ammunition it had on hand when the war began in February, according to Col. Margo Grosberg, commander of Estonian Defense Forces intelligence.

North Korea is likely producing ammunition for Russia, including grenades, rockets, and artillery shells. It also may be cutting corners to make ammo cheaper and faster, according to the Daily NK. North Korean munitions factories have been ordered to leave out waterproofing artillery shells to churn them out faster, Daily NK reported. You can read our report on Russia’s ammunition woes from yesterday here.

France and Italy have agreed to provide Ukraine with Mamba surface-to-air missiles, which will be added to the arsenal of air defense systems the U.S. and other NATO nations have donated to protect Kyiv and other cities from Russian airstrikes.

More evidence has emerged to suggest that Russian forces in Ukraine are poorly equipped with substandard equipment and ineffective body armor. The Ukrainian 59th brigade, on Dec. 13 published a photo reportedly showing a Russian armored vest manufactured in 1974, made of aluminum discs and designed only for protection against edged weapons. Such body armor is of little use against modern small arms and shrapnel from sophisticated anti-personnel weapons employed by Ukraine’s military.

Russian officials are blaming Ukrainian saboteurs for damage to a bridge in Melitopol, saying the span was felled by explosives planted beneath it.

Ukrainian forces are undoubtedly proud of the High-Mobility Artillery Rocket Systems, or HIMARS, they have received from the U.S. government. In the video below, one is seen firing in broad daylight from a paved road with what appears to be civilian traffic nearby. While this HIMARS would seem relatively exposed to enemy counter-battery fire after letting loose with several rockets, the system is designed to fire and maneuver, or shoot and scoot, before enemy weapons can lock onto its position. Drivers could quickly be long gone from this position before Russian forces can react to incoming fire, especially atop a prepared road surface. That is if they are capable of reacting at all and HIMARS firing position isn’t as easy to identify due to its maneuvering smart rockets as a traditional artillery system.

Countless videos of very-low-flying helicopters have emerged from the conflict, but the one below shows the battlefield draped in a blanket of snow from treetop level. Pilots like these in an Mi-17 fly fast and low to avoid detection, enemy air defense weapons, and small arms fire.

Winter in Ukraine also has its downsides, not the least of which is the biting cold. The video below shows how the country’s fertile soil turns into deep, slick mud when soaked with rain and snow. The tracked vehicle almost floats like a boat through the mire. Such conditions are very hard on dismounted troops and wheeled vehicles and make large-scale combat operations difficult, if not impossible.

Germany announced it would donate another 50 million Euros worth of winter aid to Ukraine, according to the German Foreign Office. Foreign Minister Annalena Baerbock made the announcement on Dec. 13 at a conference on Ukraine in Paris, saying, “Putin wants to break Ukrainians with his brutal tactic of plunging them into the cold. We won’t let that happen.”

More footage has emerged of drones engaged in aerial combat. In the video below, a Ukrainian drone hovers above a Russian commercial-grade unmanned aerial system, likely a DJO Mavic or similar, before quickly ramming it from above. Both sides employ small, relatively inexpensive drones like these for aerial reconnaissance, targeting and dropping ordnance on enemy positions. Increasingly they are engaging one another when they encounter other drones in the air above the battlefield.

The video below shows combat footage of Ukrainian ATGM strikes on Russian positions with the help of drones to target and correct fire.

In other drone news, Ukraine has developed a system through which Russian soldiers can surrender to a remotely operated UAS. According to the story below, Russian troops wishing to surrender to Ukrainian forces voluntarily can contact the “I Want To Live” project and receive coordinates where a quadcopter will meet them. Russian troops then raise their hands and follow the drone to Ukrainian lines, where they will be taken into custody.

Ukrainian drone manufacturer Ukrspecsystems has unveiled an updated version of its “Shark” drone, seen below. The UAS has a wingspan of more than 9 feet and can stay aloft for four hours.

The post Ukraine Situation Report: Nature May Have Aided Sinking Of Russian Flagship appeared first on The Drive.