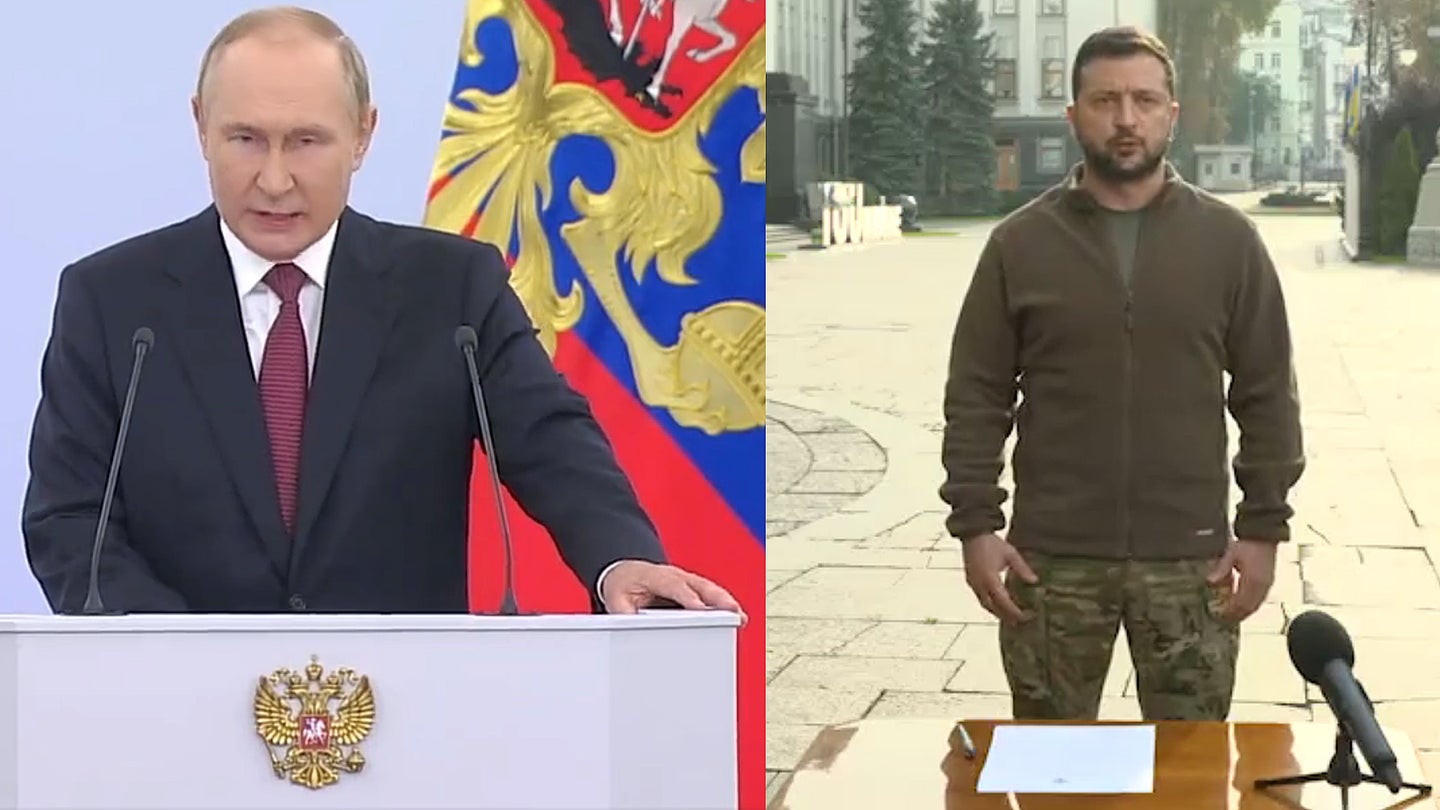 Russia’s all-out war on Ukraine became a war of words Friday, with dueling and highly significant messages from Moscow and Kyiv.

In front of hundreds of military and government leaders at the Kremlin, Russian President Vladimir Putin demonized the U.S. and the West writ large in his speech announcing the illegal annexation of four Ukrainian regions.

In 37-minute speech full of alarming acrimony, dubious assertions and demagogic hyperbole, Putin blasted the U.S. for “satanism” and “neocolonial hegemony,” decried the West for “Russophobia” and wanting to turn Russia into a colony and made a chilling comment about the use of nuclear weapons.

“The United States is the only country in history that has used nuclear weapons. Creating, by the way, a precedent.”

Putin also urged Kyiv to agree to a ceasefire and come to the negotiating table, but that there would be no room for negotiations over the Donetsk, Luhansk, Zaporizhzhia, and Kherson regions, which held sham referendums leading to the appearance of overwhelming approval to join Russia.

But even as Putin spoke, Mykhailo Podolyak, a top Zelensky advisor, needled the Russian leader, tweeting out that his troops were being surrounded by Ukrainian troops in the key town of Lyman, in Donetsk.

“8 years ago, ru-military surrounded our [forces] near Ilovaisk. Our guys agreed to surrender without weapons. But Russia broke its word. The column was shot. Today RF will have to ask for an exit from Lyman. Only if, of course, those in Kremlin are concerned with their soldiers.”

“De facto, we have already completed our path to NATO,” he said. “De facto, we have already proven interoperability with the Alliance’s standards, they are real for Ukraine – real on the battlefield and in all aspects of our interaction. We trust each other, we help each other and we protect each other. This is what the Alliance is. De facto. Today, Ukraine is applying to make it de jure. Under a procedure consistent with our significance for the protection of our entire community. Under an accelerated procedure.”

Zelensky also said that while he could see one day negotiating with Russia, it would not be with Putin as president.

In a press conference later Friday, NATO Secretary General Jens Stoltenberg danced around the issue when asked about it by a Ukrainian reporter.

“Every democracy in Europe has the right to apply for NATO membership and NATO allies respect that right,” he said. “And we have stated again and again that NATO’s door remains open. NATO allies when they met at the NATO summit in Madrid, stated also very clearly, that we support Ukraine’s right to choose its own path to decide what kind of security arrangements it wants to be part of.”

Stoltenberg, however, did not directly answer a question about whether NATO would act on Zelensky’s request.

“A decision on membership has to be taken by all 30 allies, and we take these decisions by consensus. Our focus now is on providing immediate support to Ukraine that will help Ukraine defend itself against the Russian brutal invasion. That’s the main focus on the main effort of NATO allies.“

By avoiding a direct answer, Stoltenberg sidestepped the thorny issue of the unlikely near-term accession of Ukraine into NATO. Zelensky’s request apparently took U.S. officials off-guard, with National Security Advisor Jake Sullivan suggesting that now was not the time for such an action.

Stoltenberg addressed other issues as well. When asked by a German reporter if there was a concern over whether Ukrainian attacks on the illegally annexed territory will spur a greater response by Putin, he said Ukraine has a right to defend itself.

“Ukraine has of course the right to retake Ukrainian territory, which is now occupied by Russian forces. That’s the reason why we support them. So they can defend themselves but also so they can continue to liberate territory. And as I said the illegal annexation or attempt of annexing Ukrainian territory doesn’t change the nature of this conflict. Because if we accepted the annexation by Russia and nuclear saber-rattling …then we accept nuclear blackmailing.”

Still, Stoltenberg raised some hackles in Moscow, with Dmitri Medvedev, Deputy Chairman of the Security Council of the Russian Federation and a close Putin ally, issuing a thinly-veiled threat that if Stoltenberg “does not stop, then a significant part of Ukrainians will disappear.”

Not surprisingly, Putin’s speech was lauded by his supporters and met with widespread derision and scorn by his opponents and enemies.

Alexander Dugin, a Russian political analyst and Putin supporter, whose daughter Darya Dugina was killed in a car bombing last month in Moscow that may have been targeting him, called the speech – which alluded to his daughter – “a fundamental declaration of war against the modern west and modern world in general.”

And a huge crowd in Moscow showed thunderous support when Putin made an appearance in Red Square after his speech.

The U.S. was among many nations to swiftly condemn Putin’s annexation move. Secretary of State Antony Blinken denounced the move as the U.S. issued a new wave of sanctions on Russia.

Christo Grozev, executive director and lead Russia investigator for Bellingcat, an investigative journalism group that specializes in using open-source intelligence and networks of professional and citizen journalists, called it “one of the craziest batshit speeches Putin has ever made.”

Others made fun of the audience’s reactions, like Medvedev apparently nodding off.

Someone in the crowd must have had a very urgent call, because he was captured during the speech on the phone.

But apparently, Ramzan Kadyrov, head of the Chechen Republic, was moved by Putin’s words.

Putin’s bellicose speech increases concerns that, as Russia continues to lose ground in Ukraine, he might take desperate actions, including the use of nuclear weapons, to stave off a defeat. The War Zone talked to top nuclear experts about the chances of Russia using nuclear weapons in Ukraine, you can read that recent report here.

We will be adding more updates to this post regarding everything else going on in the conflict momentarily.