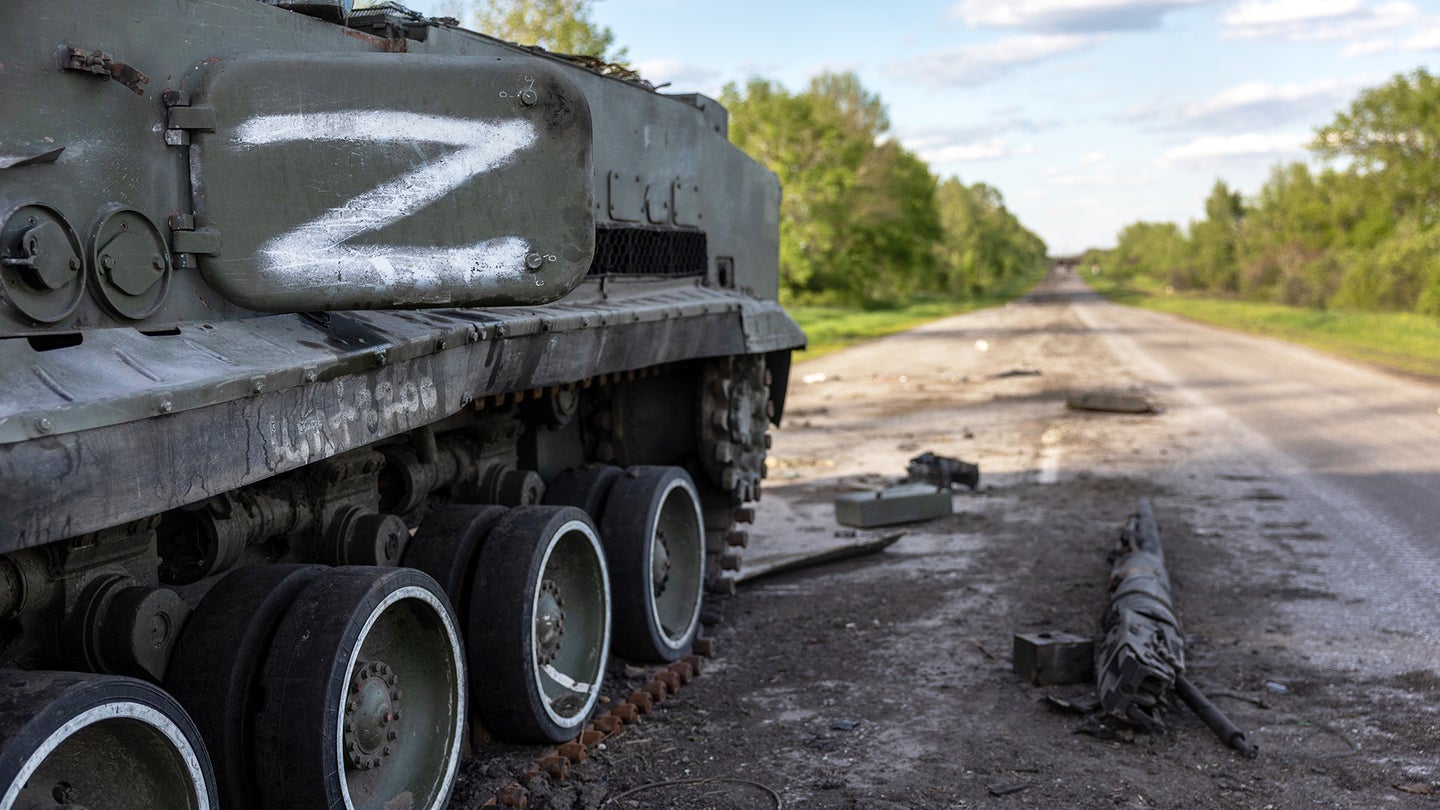 KHARKIV, UKRAINE - MAY 13: A destroyed Russian armored vehicle pictured on May 13, 2022 on the northern outskirts of Kharkiv, Ukraine. Ukrainian and Western officials say Russia is withdrawing forces around Kharkiv, Ukraine's second-largest city, suggesting it may redirect troops to Ukraine's southeast. (Photo by John Moore/Getty Images).

Ukrainian forces reportedly reached the Russian border in a successful counterattack on the now-abandoned Kharkiv frontline. Ukrainian units have spent the last week or more pushing north and east from the besieged city, working to knock the Russians out of artillery range to protect the city.

The Kharkiv front is the latest Russian attack axis to collapse after abandoning advances north of Kyiv, in Chernihiv, and Sumy in early April. Ukraine’s second-largest city, Kharkiv was a major Russian objective on Day 1 of the war and has endured near constant artillery, ground and air attack since Russian armor first advanced from across the border in Belgorod. The front’s collapse after having thrown the kitchen sink at the city is nothing short of stunning.

A Ukrainian victory north and east of Kharkiv proper means troops can focus on attacking the Izyum salient, where Russian forces remain committed toward Kramatorsk and Slovyansk.

Before heading into the latest news from Ukraine, The War Zone readers can get caught up with our previous rolling coverage here.

In an Instagram post, Zelensky called the visit “a powerful signal of bipartisan support for Ukraine from the United States Congress and the American people.”

The visit is the latest among a series of high-profile trips by U.S. officials to Ukraine, with First Lady Jill Biden meeting refugees and Ukrainian First Lady Olena Zelenska in the western city of Uzhorod a week ago, and House Speaker Nancy Pelosi led a previous congressional delegation to Kyiv two weeks ago. Secretary of Defense Gen. Lloyd Austin and Secretary of State Anthony Blinken met with Zelensky in the Ukrainian capital in late April.

The British Ministry of Defense’s latest update noted a looming and likely rigged referendum by Russian-backed authorities in occupied Kherson.

The referendum would mirror tactics that were part of Russian efforts to legitimize separatist governments in the Donbas and Crimea’s annexation in 2014. However, it’s unclear how the pitched battle for control of Kherson itself will affect efforts at a referendum.

Fighting along the contested Donets River has turned into a vicious, grinding battle with incredible Russian losses. We wrote about the botched river crossings earlier this week, and you can read more about those efforts here.

New drone imagery shows what appears to have been a costly and chaotic retreat into the river by Russian forces, with a mass of tanks seen swamped up to their turrets in the water.

How so many tanks ended up swimming isn’t clear. Panicked tank crews could have retreated from enemy fire right into the water, or in some incredible mishap advancing through smoke or in low light may have driven in without snorkels equipped.

Further south in Mariupol, the Azovstal steel mill remains under siege after weeks of bombardment despite ongoing negotiations for evacuations for those troops in the surrounded facilities.

Russian forces continue to use heavy artillery, tanks, air attacks, and swarms of infantry in an effort to dislodge the plant’s defenders, according to a post on the Azov Regiment’s Telegram. You can read our previous exclusive coverage of the fight for Azovstal here.

Secretary of Defense Gen. Lloyd Austin spoke to his Russian counterpart Gen. Sergey Shoygu on Friday for the first time since before Russia’s invasion. Austin reportedly pleaded for an “immediate ceasefire” in Ukraine and better lines of communication between Russia and the U.S.

To that effect, Zelensky has maintained peace negotiations and any subsequent ceasefires are contingent upon Russian forces’ withdrawal from Ukrainian territory.

There’s also rather interesting footage, reportedly of Russian reservists, equipped with bolt-action Mosin-Nagant rifles. While in theory still a viable option for snipers or marksmen, these particular units lack any optics beyond standard sights.

Outfitting reservists with a century-old rifle when there are likely lifetime supplies of Kalashnikov rifles in Russia doesn’t make much sense when Ukrainian forces, despite its own mounting shortage of small arms, are receiving more and more modern weapons.

Lastly, it looks like the Georgian Legion got its hands on at least one sought-after ELEEK Atom electric motorcycle.

Georgian Legion Commander Mamuka Mamulashvili told The War Zone he wanted the quiet, speedy motorbikes to allow sniper teams to quickly move from position to position while avoiding Russian artillery fire. You can read our story on the near-silent motorcycles here.

We will update this story as needed until we state otherwise.