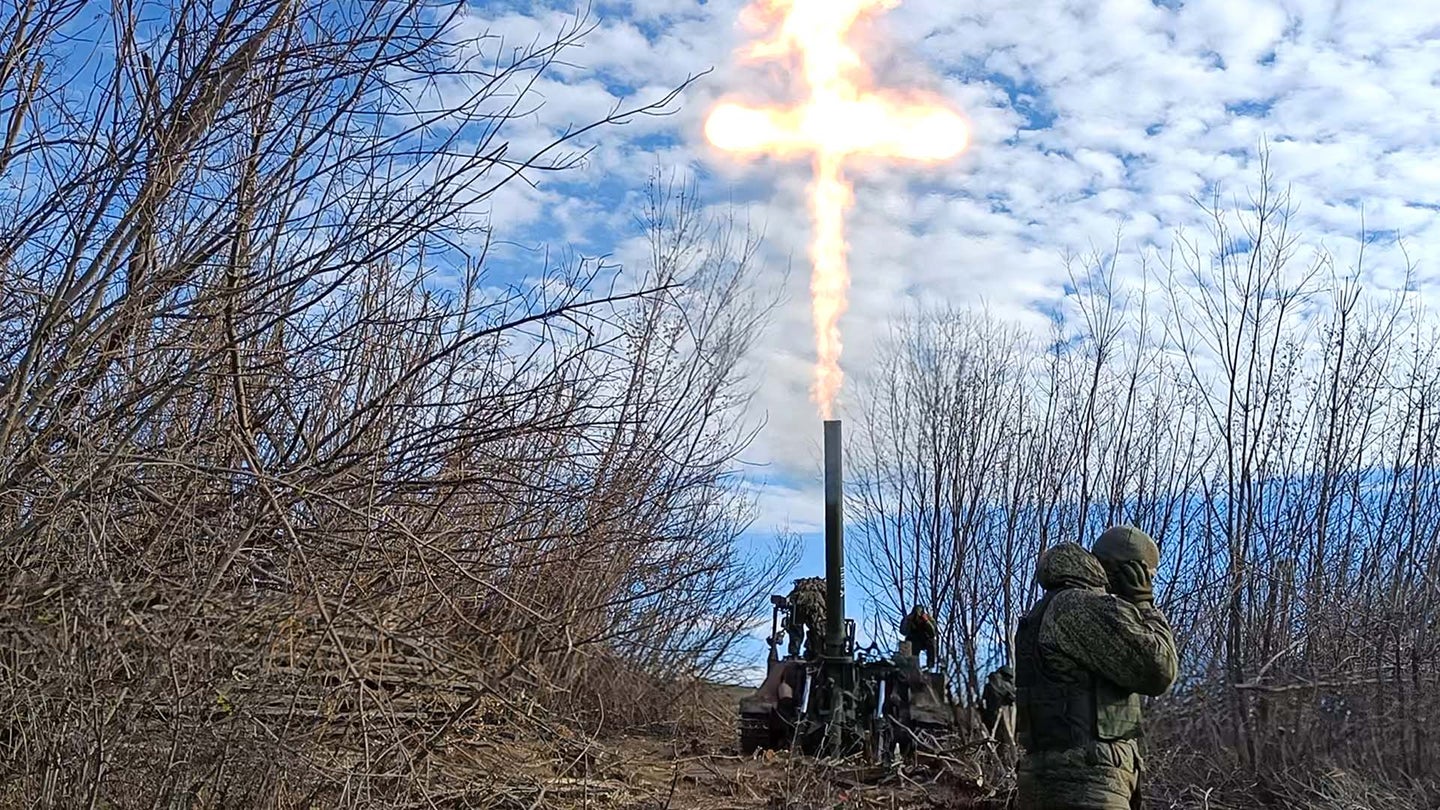 “The main efforts of the Russian Armed Forces are aimed at completing the liberation of the territory of the DPR,” Russian Army Chief of Staff Valery Gerasimov, said at a Thursday briefing, according to the Telegram channel of Russian state media outlet RIA Novosti.

That announcement comes after Russia has suffered huge losses in personnel, equipment and territory it conquered since launching its all-out invasion in February. Russian forces have been pushed back across the Dnipro River in Kherson Oblast, nearly to the border in Kharkiv Oblast and deep into the Donetsk Oblast.

Along with Luhansk and Crimea, the DPR declared independence in 2014, touching off eight years of fighting with Ukraine that preceded Putin’s all-out invasion in February.

It is now the focus of some of the bloodiest battles of this all-out war, especially in the beleaguered city of Bakhmut, some 40 miles northeast of the city of Donetsk, the DPR “capital.”

Despite the fierce fighting and Ukrainian counter-attacks, Gerasimov said Russia is holding the line in Donetsk, one of four Ukrainian regions Russian President Vladimir Putin illegally annexed in September after sham referendums.

“The line of contact stretched for 815 km (506 miles),” Gerasimov said at the briefing. “The situation on it was stabilized.”

The line of contact may be solidifying, but the region itself is anything but stable.

Wednesday, DPR Prime Minister Vitaly Khotsenko and Dmitry Rogozin, a former Russian deputy prime minister and head of Roskosmos were injured and two others were killed when Ukrainian forces shelled a hotel in Donetsk City.

And though Russian forces are inching closer to Bakhmut, Ukraine has mounted a stiff defense, with fighting proving costly for both sides.

Adding insult to injury, Ukrainian President Volodymyr Zelensky made a bold and dangerous visit to that city on Tuesday, greeting troops and strolling through the streets about a mile from the front lines and well within range of Russian artillery and drones.

So even in Russia’s vastly scaled-down notion of battlefield success, things are not going as well as Gerasimov might like.

Before we head into the latest coverage from Ukraine, The War Zone readers can get caught up on our previous rolling coverage here.

Gerasimov is right about the line of contact in Donetsk largely stabilizing, as it has across much of the rest of the Ukrainian war zone. Aside from Donetsk, the fiercest fighting remains in the area around the P-66 Highway in Luhansk Oblast, running from Svatove to Kreminna. Here are the key takeaways from the latest Institute for the Study of War assessment:

A day after Zelensky’s visit to Washington D.C., where he met with Biden, addressed a joint session of Congress and thanked the U.S. for supplying weapons, including a Patriot air defense battery, Kremlin spokesman Dmitry Peskov publicly pouted.

“Zelensky’s visit to the United States confirmed that Washington continues to de facto and indirectly fight with Russia to the last Ukrainian,” he said, according to the Telegram channel of the state-affiliated RIA Novosti news agency. “Moscow regrets that neither Biden nor Zelensky have demonstrated a potential willingness to heed Russia’s concerns.”

Peskov also complained about Biden’s promise to deliver the Patriot battery to Ukraine and repeated Russian threats to destroy it.

The Russians weren’t the only ones displeased about Zelensky’s visit to the U.S.

“Russia found an ally in this — in this genocidal policy: Iran,” he said. “Iranian deadly drones sent to Russia in hundreds — in hundreds became a threat to our critical infrastructure. That is how one terrorist has found the other.”

That did not sit well with Iran.

Iran has “repeatedly responded to baseless accusations regarding drones leveled by Ukrainian officials against the Islamic Republic,” the Iranian Foreign Ministry said on its website, adding that Kanaani “once again stressed that the Islamic Republic of Iran has not supplied any military hardware to any side for use in the Ukraine war.”

Kanaani also noted that Iran has always respected the territorial integrity of all countries including Ukraine.

“Mr. Zelensky had better know that Iran’s strategic patience over such unfounded accusations is not endless,” he said.

Speaking of the Patriot battery being shipped to Ukraine, which a senior U.S. defense official said won’t arrive for months, the Pentagon on Thursday released details about how much the system and its associated interceptor missiles cost.

While “highly dependent on the number of launchers, the configuration of the fire units to be delivered, and the number of missiles provided,” a “typical fire unit” generally “costs between $450 million and $550 million,” Air Force Brig. Gen. Pat Ryder, the Pentagon’s top spokesman, told reporters, including from The War Zone, in an email Thursday. “This cost includes one radar unit, 4-8 missile launching stations, a command and control center, and power and support vehicles; this is everything except the missiles themselves.”

Each missile, at least of the latest advanced variety, costs roughly $4 million, he said.

The Crimean peninsula, illegally annexed by Russia in 2014, could be recaptured by Ukraine next August, the former head of U.S. Army Europe told The War Zone Thursday morning.

“They’ll do it by first setting the conditions, isolating Crimea from Russia by severing the two land lines of communication (LOC’s) over the Kerch Bridge and the so-called ‘land bridge’ which runs from Rostov thru Mariupol and Melitople to Crimea,” said Ben Hodges, who retired in 2018 as a lieutenant general and now serves as NATO senior mentor for logistics.

“Those are the only two land routes in and out of Crimea,” he said. Ukraine “has already severely damaged the Kerch Bridge…and I’m sure it’ll be revisited in the next month or so…and they have already hit a bridge in Melitopol. So both LOC’s are already being disrupted.”

Ukraine “will keep this up for a couple of months at least while keeping pressure on the Russian [headquarters], ammo storage sites, etc.”

Kyiv will also “attempt to bring [M142 High Mobility Artillery Rocket Systems] HIMARS and other long-range systems, including their own long-range drones, close enough to hit targets on Crimea proper. The aim will be to make Crimea untenable for Russian air force, navy, and HQs etc.”

The Black Sea Fleet, Hodges noted, “has already relocated its submarines to its port of Novorossiysk, after the first drone strike.”

Meanwhile, Ukrainian special forces, partisans, and other assets “will contribute to this pressure on the Russians.”

At some point, said Hodges, the Russians “will have to decide how much more they can lose in Crimea before deciding to leave. Of course there will at some point be a Ukrainian land attack but I don’t think that happens until after the conditions have been set.”

Hodges summed up his assessment with “a big caveat” – that the West “continues to deliver what we said we were going to deliver.”

And a day after President Joe Biden told Zelensky that the U.S. was still not going to provide Ukraine with some of the longer-range weapons he wants, Hodges doubled down on Zelensky’s desire.

“It would go much faster if the Ukrainians had [Army Tactical Missile Systems] ATACMS and tanks,” he said.

The New York Times on Thursday dropped a major investigation into the massacre of civilians in Bucha by Russian troops.

The eight-month visual investigation by “concluded that the perpetrators of the massacre along Yablunska Street were Russian paratroopers from the 234th Air Assault Regiment led by Lt. Col. Artyom Gorodilov.”

The Wall Street Journal took a deep dive into the problems experienced by Russia’s mobilized reservists, a topic frequently touched on by The War Zone.

The Wall Street Journal also reported that Europe “is struggling to produce enough ammunition for Ukraine and for itself, jeopardizing NATO’s defense capacity and its support for Kyiv.”

The newspaper, citing officials and industry leaders, reported that a “lack of production capacity, a dearth of specialized workers, supply-chain bottlenecks, high costs of financing and even environmental regulations are putting a brake on efforts to increase output, presenting the West and Ukraine with a fresh challenge for next year.”

If you want to see how intense really close fighting between infantry and tanks can be, check out this video, which reportedly shows two Russian tanks firing at Ukrainian troops who are close enough to respond by tossing hand grenades. The video also depicts the challenges armor faces when not supported by its own infantry.

The first image has emerged of one of two recently delivered French LRU multiple launch rocket systems (MLRS) in service with the Ukrainian Army. The LRU is a modernized version of the American-built M270 MLRS.

At the behest of the German government, Rheinmetall is supplying Ukraine with new HX 8×8 trucks, the company announced Thursday in a media release. In total, 26 of these high-mobility hook-loading vehicles will be transferred to Ukraine. The order is worth $13.25 million, the company said, adding that delivery of the vehicles has already begun.

And finally, some people celebrate their birthdays with candles on cakes. In this video, one Ukrainian artillery soldier shows another way to celebrate.

We will update this story when there is anything major to add.