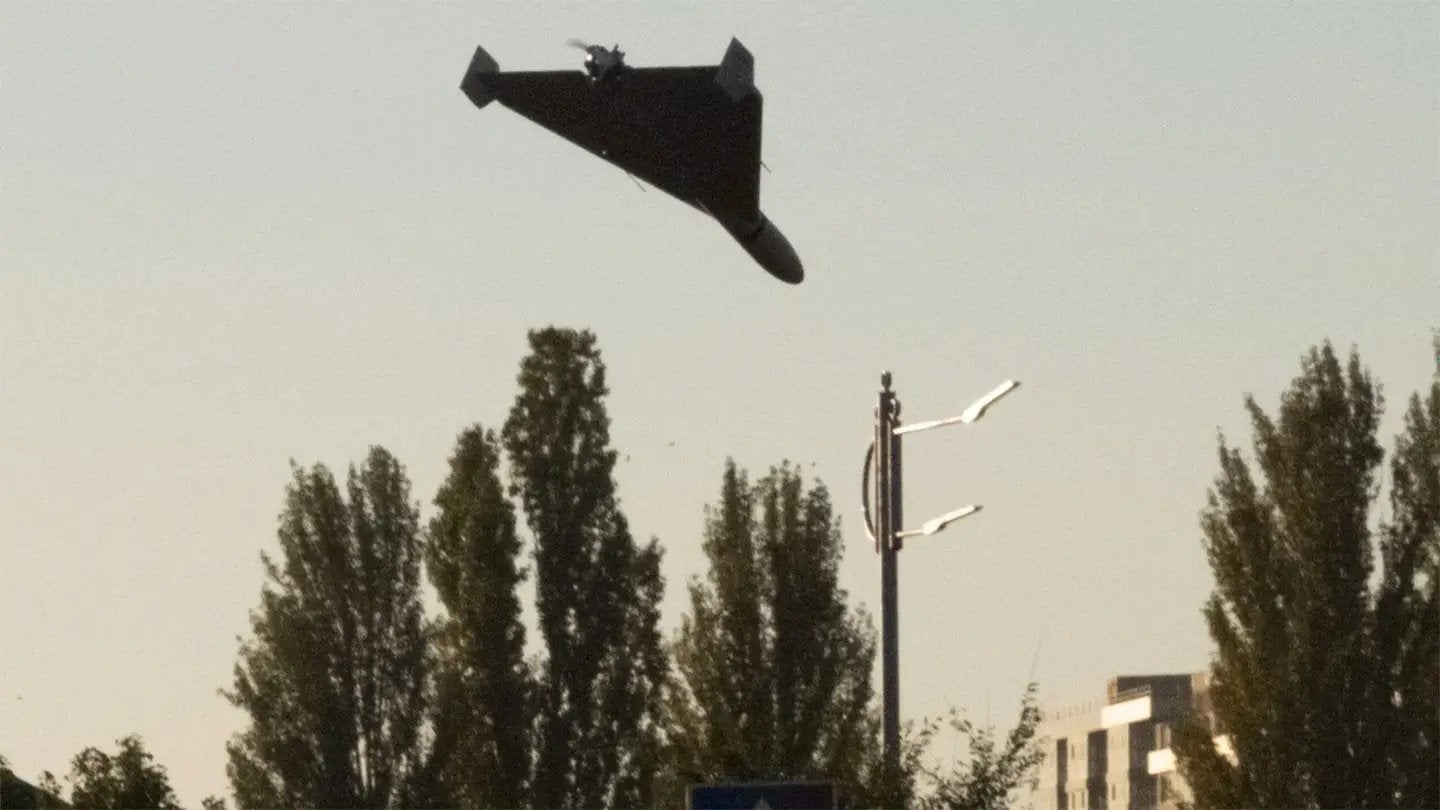 As of Tuesday, Iranian-made Shahed-136 drones had not appeared over the skies of Ukraine since the middle of last month and the reason is that Russia likely ran out of them, according to the Ukrainian Air Force.

“It’s been three weeks” since Ukrainian air defense forces have seen “the loitering drones of the Shahed-type,” Yuri Ignat, spokesman for the Ukrainian Air Force, said during a press conference Tuesday at the Ukrainian Media Center. “There are different thoughts and factors which indicate probably that the first shipment received by the occupiers is over [and] they ran out of them.”

Russia initially ordered about 1,700 of the Shahed-136 drones, said Ignat, with only about 400 arriving in Russia so far. Of those, he said about 350 were shot down by Ukrainian air defense forces. Those that managed to make it to their targets caused tremendous damage and terrorized Ukrainian civilians.

The Shahed-136 is a member of a family of designs dating back to around 2014. In addition to widespread use in Iranian service, they have also been transferred to Iranian proxies operating in Iraq, Syria, and Yemen. The small gas-powered flying wing-type drones – that can hit static targets by flying into them and detonating – began showing up on the battlefield in Ukraine around the middle of September. You can read more about that in our coverage here.

While the idea that Russia ran out certainly makes sense, it’s possible that the frigid conditions in Ukraine during winter also had an impact on their use. Icing conditions and just the very chilly atmosphere may be beyond the drones’ performance envelope. Still, Ignat claims this is not the case, stating:

“So we are being asked if the weather conditions influence or types of dust influence so yes, the weather does influence all types of aerial projectors. But it’s been three weeks that the Russians don’t use them anymore. So we have reasons to think that the first shipment is done with.”

On Nov. 1, a Ukrainian intelligence source told The War Zone that a new shipment of about 200 Iranian combat drones was expected to arrive in Russia within weeks. Ignat on Tuesday said he did not know why Iran hasn’t delivered more Shahed-136 drones to Russia. But Iran is under a great deal of internal and international pressure as the result of domestic protests and global concern about its arms deals with Russia.

While Russia may have run out of, or at least is running very low on, Iranian Shahed-136 drones, Moscow apparently still has the ability to produce new missiles, said Ignat, speaking a day after Russia fired about 70 of those weapons at Ukraine.

Some Russian missiles “were manufactured not so long ago,” said Ignat. “It is alleged that the manufacture [of the missiles] is still working. Maybe they cannot manufacture the missiles as quickly as they would want to, but they still have those parts, those components that Russia will find it hard to get anywhere else under sanctions.”

Russia, despite those sanctions, still has the parts it needs to build and deliver Kalibr and Kh-101 missiles, said Ignat.

His statements line up with the results of an investigation released Monday by the Conflict Armament Research (CAR) group showing that Russian missiles launched against Kyiv on Nov. 23 were made just months earlier.

“CAR’s latest documentation shows that Russia is still able to manufacture guided weapons after months of sanctions,” the organization said in its report.

On Nov. 25, two days after a large-scale Russian missile attack on Ukraine’s power infrastructure, CAR field investigators in Kyiv “documented remnants of two of the missiles that hit the city. These missiles were Kh-101 air-to-surface guided weapons, a latest-generation model of Russian cruise missiles that entered into service in 2013. The remnants bore marks indicating that the weapons were produced between July and September 2022 and between October and November 2022.”

CAR previously documented the components of a Russian Kh-101, finding they are “heavily reliant on components and technologies produced by companies based in the United States and Europe. Most of the components of Russian weapons for which CAR could identify a year of manufacture were made between 2014 and 2021 .”

Ignat added that any future Russian missile wave won’t come over the next day or so “because the missile route is programmed ahead. Intelligence is being gathered [from] space and air and land. They gather details about the location of our air defense systems. How to find a way around it. Where to find weak links. We understand that [Monday’s attack] was not a spontaneous decision. It was prepared earlier.”

But while Russia seemingly still has the capacity to produce some cruise missiles despite dire predictions otherwise, it is apparently burning through artillery ammunition at an unsustainable pace.

During its offensive in the Donbas about a month after launching its all-out invasion, “Russian artillery fired around 20,000 rounds per day, with their peak fire rate surpassing 32,000 rounds on some days,” according to a recent report by the Royal United Services Institute (RUSI).

While Haines could not provide a figure in a public forum for Russia’s current artillery burn rate, she said “it’s really pretty extraordinary…our own sense is that they are not capable of indigenously producing what they are expending at this stage. So that is going to be a challenge.”

It’s questionable, anyway, how many additional artillery rounds Russia can produce domestically, which is one reason it has been surreptitiously obtaining some from North Korea. Given the importance of artillery in this conflict, any serious shortfall of rounds would prove disastrous for Moscow.

On the battlefield, gains on both sides remain incremental at best, with Russian forces continuing to surround Bakhmut in Donetsk while Ukrainian troops are trying to gain ground around the P-66 highway in Luhansk.

Here are the key takeaways from the latest Institute for the Study of War assessment:

Ignat said that Ukraine’s success against the latest Russian missile barrage was in no small measure thanks to foreign-donated air defense systems and highlights how his nation needs more.

“With the high intensity of anti-aircraft combat, it is difficult to provide an exact count, but …over 60 missiles out of more than 70 were shot down,” he said. These are numbers that impress not only the Ukrainian people but also our Western partners. Air defense in Ukraine works quite effectively. It needs to be strengthened with modern air defense equipment that we have today, which work effectively.”

In particular, he said both the German-supplied IRIS-T and U.S.-supplied National Advanced Surface-to-Air Missiles Systems, or NASAMS, “were used yesterday, and they shot down all the air targets they were aimed at. Again the result is 100%. Both anti-aircraft guns and mobile fire-teams were used, as well as fighter aircraft and anti-aircraft missile troops. All efforts and means were aimed at repelling the aggression, which was achieved quite successfully.”

The requested additional air defenses won’t come in the form of a U.S.-made Patriot air defense battery coming from Poland. Berlin offered Warsaw the Patriot system to help secure its airspace after a stray missile crashed and killed two people in Poland last month. You can read more about that here.

Germany, however, shot down a request by the Poles to place it instead in western Ukraine.

“After talking to [Germany] on Monday, I was disappointed to accept the decision to reject support of [Ukraine],” Polish Deputy Prime Minster and Defense Minister Mariusz Błaszczak said in a Tweet Tuesday. “Placing the Patriots [in] western [Ukraine] would increase the security of Poles and Ukrainians. So we proceed to working arrangements regarding the placement of the launcher in [Poland] and connecting them to our command system.”

In the wake of recent attacks on airbases inside Russia – which Moscow blames on Kyiv – that apparently damaged at least one Tu-22M3 Backfire-C bomber and apparently also a Tu-95MS Bear-H, the U.S. State Department is trying to thread the needle in discussing Washington’s support for Kyiv.

“Everything we are doing, everything the world is doing to support Ukraine, is in support of Ukraine’s independence, its sovereignty, its territorial integrity,” he said. “We are providing Ukraine with what it needs to use on its sovereign territory, on Ukrainian soil, to take on Russian aggressors.”

While the Russians talk about President Vladimir Putin one day visiting the Donbas, Ukrainian President Volodymyr Zelensky actually made it there today, visiting the town of Sloviansk in the Donetsk Oblast. He also visited an area in the Kharkiv Oblast, where he mingled with wounded troops and handed out medals. It was his way of celebrating Ukraine’s Armed Forces Day.

Ever wonder what it’s like to fire the turret-mounted 73mm 2A28 smoothbore gun in the Ukrainian BMP-1 infantry fighting vehicle? Then check out this video, where the gunner rapidly hand loads OG-15V high explosive rounds, which are too short for the autoloader.

The Ukrainian parliament on Tuesday allocated 130 million Hryvnia (about $3.5 million) for the production of locally-made Stugna-P anti-tank missile systems, the Ukrainian Defense Ministry announced on its Telegram page. Officials did not say how many systems would be purchased.

Bakhmut continues to be a bloody slog for both sides.

And finally, throughout Russia’s full-on invasion of Ukraine, its troops have frequently been recorded looting homes and businesses. The latest such video apparently shows Russian troops stealing…a bathtub.