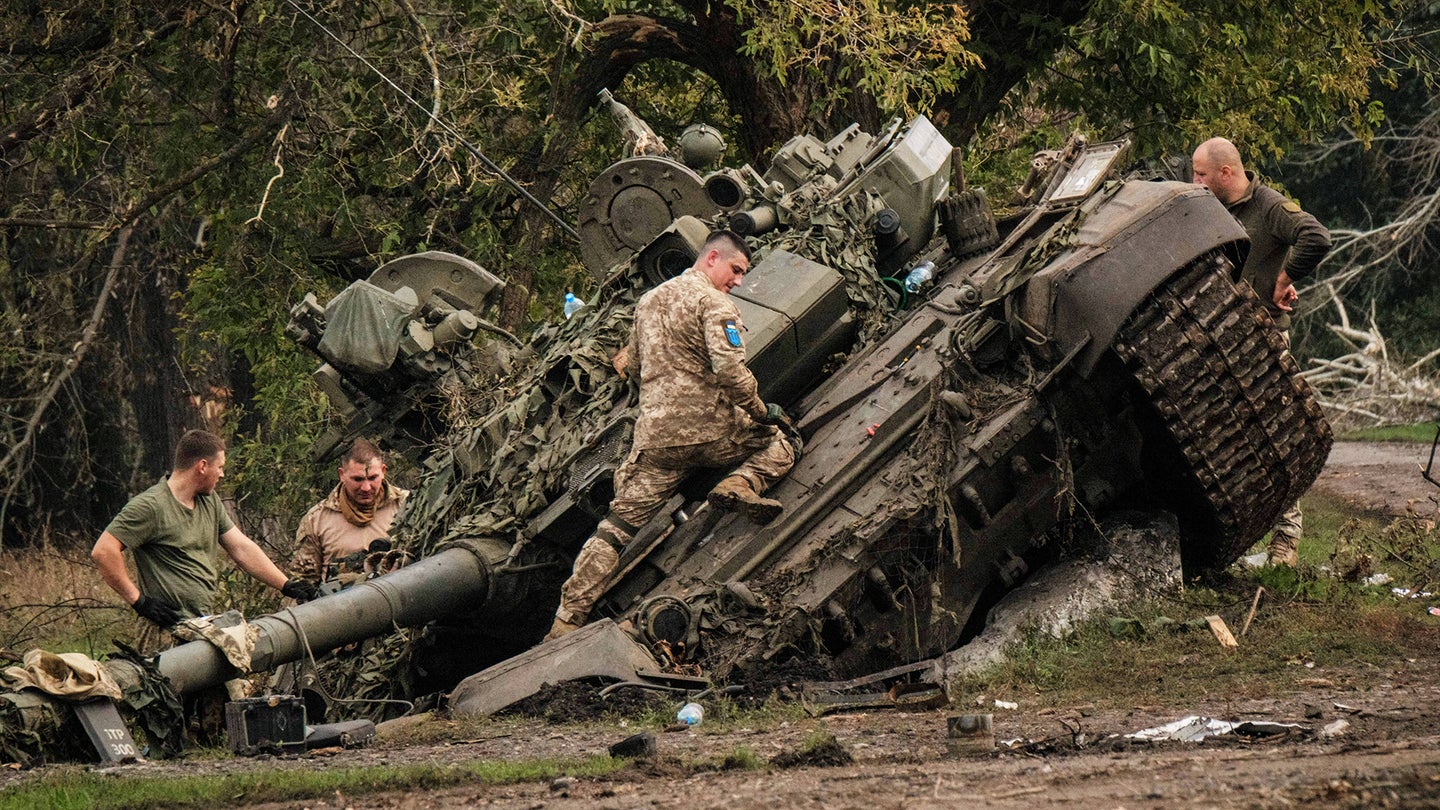 Ukraine claimed some 5,000 Russian troops were trapped in the Lyman pocket after high command refused to order their retreat. We cannot independently verify those claims, but videos and accounts from the area indicate some of those who did retreat were caught in Ukrainian ambushes as fighting continued east of the city.

Russian troops captured Lyman on May 27 in its Donbas offensive, but a Ukrainian operation to outflank and encircle the city had all but closed the pocket by September 30. The retreat prompted Ukraine’s Ministry of Defense to term the victory “Izyium 2.0,” referring to the stunning collapse of Russian forces in Kharkiv Oblast in early September.

The latest Russian defeat, only a day after President Vladimir Putin’s annexation of four occupied Ukrainian territories, led Chechen strongman Ramzan Kadyrov to call for the use of low-yield nuclear weapons in a post critical of Russian command on Telegram.

Fears grew in recent days that Russia would resort to tactical nuclear weapons in an effort to freeze the conflict, with the annexation and continued threats adding fuel to that fire. We wrote a primer on those nightmarish prospects and have a Q&A with experts on the matter, which you can read here.

In perhaps a worrying sign, Kadyrov publicly advocated for Russian federal subjects to start “self-mobilization” after Kupiansk fell on September 16. Although widely anticipated, Putin followed through with a subsequent “partial mobilization” with a dash of further nuclear threats in an address on September 21. Those threats by Putin were further extrapolated during a fiery speech in Moscow yesterday.

Whether foreshadowing or capitalizing on the wave of Russian nationalist animus after the latest defeat, or both, Kadyrov’s explicit call for tactical nuclear strikes won’t make anyone sleep easier.

Before heading into the latest news from Ukraine, The War Zone readers can get caught up on our previous rolling coverage here.

Today’s intelligence update from the British Ministry of Defense noted a reported Russian missile strike on a civilian convoy southeast of Zaporizhzhia, leaving 25 dead. A long-range surface-to-air missile (SAM) was reportedly used in the strike as stocks of precision-guided munitions continue to dwindle. This has become a known tactic in recent months.

Also in the area, Ukraine has accused Russia of kidnapping the director of the occupied Zaporizhzhia Nuclear Power Plant, Ihor Murashov, the latest in the facility’s high-risk saga since its capture by Russian forces. Ukrainian troops also claimed a kill on a Russian helicopter, reportedly a Ka-52.

As with its previous withdrawal from Izyium and throughout Kharkiv Oblast, Russian troops left gear behind. Ukrainian troops recovered a T-90A main battle tank in good condition and what looks like a rather interesting communications terminal.

In occupied Crimea, Russian aviation woes continued as video showed an unidentified aircraft exploding after running off the runway at Belbek air base just north of Sevastopol.

A former Soviet Air Defense Force (Voyska PVO), and later Ukrainian Air Force base, Russia took the airfield in its 2014 annexation of Crimea. It’s not immediately known what type of aircraft can be seen crashing over the cliffs, but the secondary explosions suggest it may have been a combat aircraft. Despite having drogue parachutes and heavy-duty gear, the lack of emergency arrestor gear like those at western bases leaves Russian tactical jets in a more perilous position in the face of a runway overrun in some circumstances You can read more about this in the tweet string below.

Planet Labs imagery from the morning before the crash shows its usual wartime residents on the flight line, several MiG-31 Foxhounds, Su-34 Fullbacks, and both Su-27 and Su-30 Flankers. A Tu-154, a Soviet-era narrow-body airliner used for VIP transport, can be seen fueling on the ramp as well.

New footage shows Ukrainian forces and their domestically produced “Punisher” drones dropping unguided bombs on Russian positions. Unlike some of the smaller commercial drones modified to drop mortars and grenades hovering above, the Punisher drops ordnance like a dive bomber with remarkable accuracy.

Ukraine continues to receive aid from NATO, with the U.S. House of Representatives passing a stop-gap spending measure Friday to both fund the government through December 16 and send an additional $12.3 billion in military and economic aid to Ukraine, per a report from the New York Times.

Additionally, France is reportedly working to acquire some of Denmark’s Caesar 155mm self-propelled howitzers for transfer to Ukraine. The system, which has already been deployed in Ukraine, has proven very effective.

While much has been made about Russian mobilization and annexation, Putin’s supposed grand rally in Red Square is looking more and more farcical. Video from Moscow shows an armada of buses parked nearby, suggesting the Kremlin had its rally crowd bussed in like talent, not an organic gathering of the masses. Bussing in state workers or those that work for state-funded enterprises is anything but a new tactic.