Ukraine Situation Report: Strategic City Of Melitopol Could Be Kyiv’s Next Target 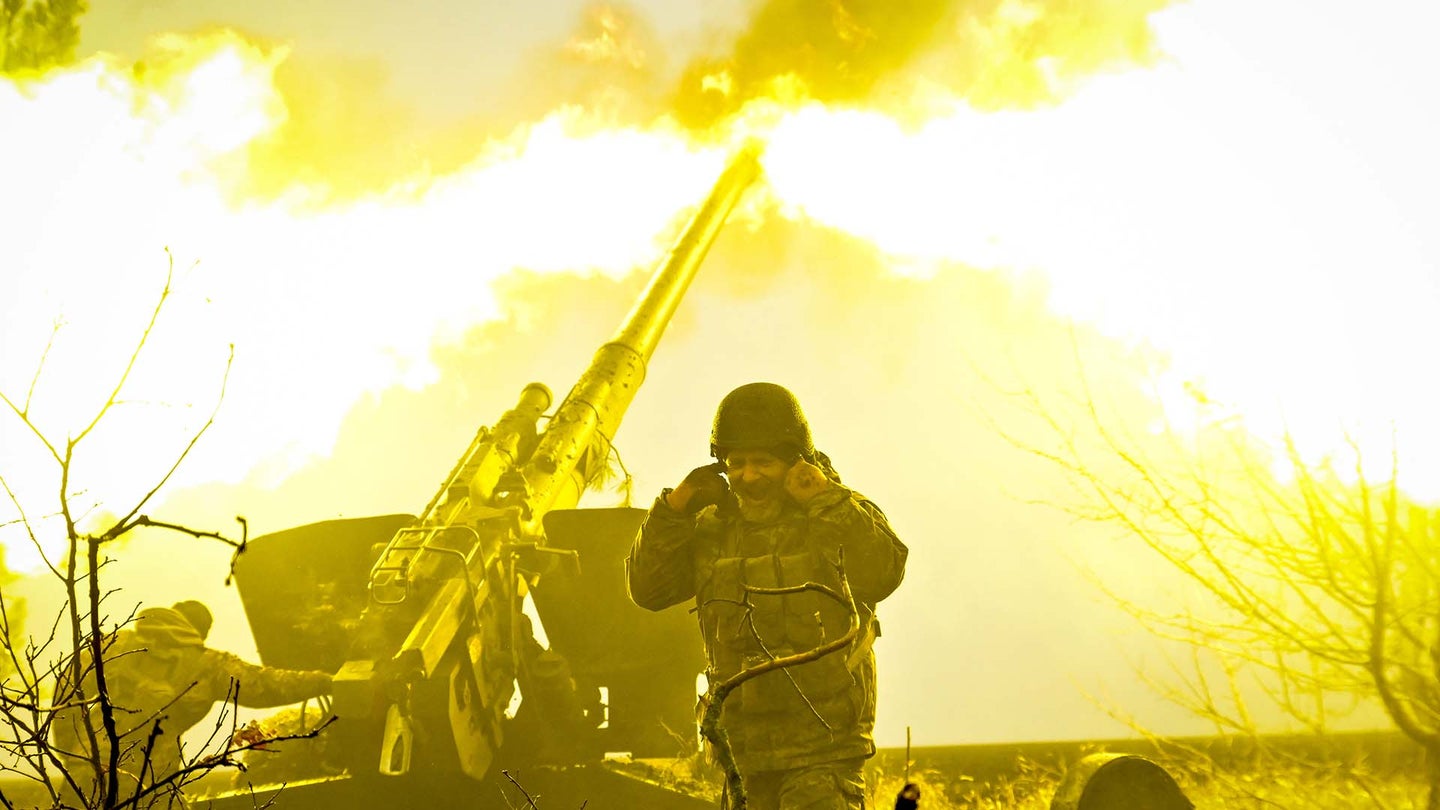 ZAPORIZHZHIA REGION, UKRAINE - DECEMBER 16, 2022 - The artillerymen who destroyed columns of Russian equipment near Kyiv are pictured next to the trailed howitzer "Msta-B" as they stand on the defense of Zaporizhzhia Region, southeastern Ukraine. (Dmytro Smoliyenko / Ukrinform/Future Publishing via Getty Images)

Russian troops are beginning to reinforce the key city of Melitopol in Zaporizhzhia Oblast ahead of what could be the next major front in this nearly 10-month-old all-out war. The oblast, where battles are taking place less than 50 miles north of that city, is considered a likely route for any Ukrainian attempt to liberate the Crimean peninsula, illegally occupied by Russia since 2014.

“This week we’re witnessing the concentration of Russian forces in the city,” Ivan Fedorov, the Ukrainian mayor of occupied Melitopol, said during a Friday press briefing. “Troops are riding around the town in their trucks with the machine guns. My native city is turning into a fortress.”

The Russians are “building fortifications inside Melitopol,” Fedorov said. “There are dragon’s teeth and they cover the whole city.”

Though the shortest route for a Ukrainian attack on Crimea would be through Kherson Oblast, that would require crossing the Dnipro River, a daunting type of operation that has already been proven dangerous in this fight. As a result, Ukraine’s best and quickest option to attack Crimea could be through Zaporizhzhia Oblast, even though a large number of Russia’s 30,000 former Kherson City troops likely wound up there as well.

Melitopol, at the heart of that route about 60 miles northeast of Crimea, “would be a significant fight,” if Ukraine decides it must attack there, Ben Hodges, a retired Army lieutenant general who commanded U.S. Army Europe, told The War Zone on Thursday. “Protecting the ‘land bridge’ [to Crimea] will be very important for the Russians. Of course, Ukraine can deny the land bridge through long-range precision fires, not only through actual ‘boots on the ground.’”

But a hopeful sign, said Fedorov, is that the Russian buildup in Melitopol reminds him of what took place in Kherson City, where Russians seemed to be digging in only to escape across the Dnipro River in early November without putting up a fight.

“They were trying to defend themselves but then they fled,” he said. “We all pray that they flee from Melitopol so our residents don’t suffer and our military has less work. But now we see more concentration of the Russian forces in Melitopol and they’re building fortifications there.”

Ukrainian troops and partisans, meanwhile, appear to be shaping the Zaporizhzhia Oblast battlefield south of where the current fighting is taking place.

On Friday, two Russian intelligence agents were badly injured when a bomb planted in a Renault Duster exploded in Gorky Park, according to the Telegram channel of Russian milblogger Semen Pegov, who goes by the name WarGonzo.

“What we’re seeing now is the gradual eradication of collaborators who betrayed our country,” Federov said of that incident.

Meanwhile, about 30 miles to the northeast, a Russian headquarters staffed by Chechen troops in the key transportation hub city of Tokmak was hit by a precision strike late Thursday night, according to the Ukrainian Ukrinform news agency. That city appears to be well within range of Ukraine’s GMLRS.

And, as with Melitopol, the Russians appear to be digging in around Tokmak.

“Over the past few months, Russian forces have almost completely surrounded the occupied city of Tokmak, Ukraine with fortifications and trenches,” Brady Africk, a spokesman for the American Enterprise Institute think tank, said in a Tweet.

So far, Ukraine has yet to unleash a Zaporizhzhia Oblast counteroffensive along the lines of its previous attacks in the Kharkiv and Kherson oblasts.

But given Ukrainian President Volodymyr Zelensky’s vow in October that his troops will “definitely liberate Crimea,” and ongoing Russian measures to fortify the peninsula, it seems such an effort is only a matter of time.

Before we head into the latest coverage from Ukraine, The War Zone readers can get caught up on our previous rolling coverage here.

Although operations appear to be underway in Zaporizhzhia Oblast, the fiercest fighting, as it has for months, continues to be in Bakhmut in Donetsk Oblast. Beyond its significance as a key logistics and transport hub, Bakhmut could also be seen by Russians as a way to draw Ukrainian forces into the fray to reduce troop and equipment levels needed for a march on Crimea. Elsewhere on the battlefield, fighting rages in Luhansk Oblast. Here are some key takeaways from the latest Institute for the Study of War assessment:

Among many other things, it includes $800 million for the Ukraine Security Assistance Initiative, an increase of $500 million above the initial budget request. By comparison, on Wednesday alone, the Pentagon announced an $850 million authorization from that account’s Fiscal Year 2022 budget to fund the purchase of 115,000 rounds of non-standard munitions, 100,000 125mm tank rounds and satellite communications equipment for Ukraine.

Across Ukraine’s northern border, another batch of Tor-M2K anti-aircraft missile systems arrived in Belarus from Russia, the Belarusian Defense Ministry posted on its Telegram channel Friday.

“The batch of weapons was received within the framework of the existing intergovernmental agreement on military-technical cooperation between Belarus and Russia,” said Major General Leonid Kasinsky, Assistant to the Minister of Defense for Ideological Work in the Armed Forces, Head of the Main Directorate for Ideological Work of the Ministry of Defense. “In the coming days, these complexes will go to the formations and military units where they are intended. The personnel have already been trained and successfully mastered these complexes.”

Russian troops are also training with forces from its client state Belarus. On Dec. 19, Russian President Vladimir Putin visited his counterpart, Belarusian President Alexander Lukashenko, where the two worked out the formation of a “common defensive space and provision of security. The meeting took place amid questionable concerns from Kyiv that Russia could launch a new offensive through Belarus, as it did during the opening days of the all-out invasion of Ukraine. You can read more about that in our coverage here.

And it appears that Russia is sending more tanks, including T-90M Breakthroughs and T-72B3s, via train to Belarus.

Beyond poorly supplied and poorly trained troops, a major reason Russia’s initial thrust toward Kyiv failed was that it the swampy Ukraine-Belarus border is not conducive to large scale military operations, as both the Germans and Soviets discovered during World War II.

Adding to the hell of Bakhmut, Russian forces apparently used incendiary ammunition against Ukrainian positions on its outskirts.

Meanwhile, Ukrainian forces’ efforts to rescue the wounded there are often hampered by incoming fire, as you can see here.

The effort to recover equipment under fire is also harrowing, as this video shows.

The effectiveness of small Ukrainian units operating improvised attack drones cannot be overstated. Watch this operator fly one such one-way drone right into a Russian in a trench. It apparently does not end well for him.

Ukraine’s proclivity for re-using captured Russian equipment has been one hallmark of this conflict. This has included growing their fleet of Russia’s most advanced operational tanks.

We will update this story when there is anything major to add.

The post Ukraine Situation Report: Strategic City Of Melitopol Could Be Kyiv’s Next Target appeared first on The Drive.