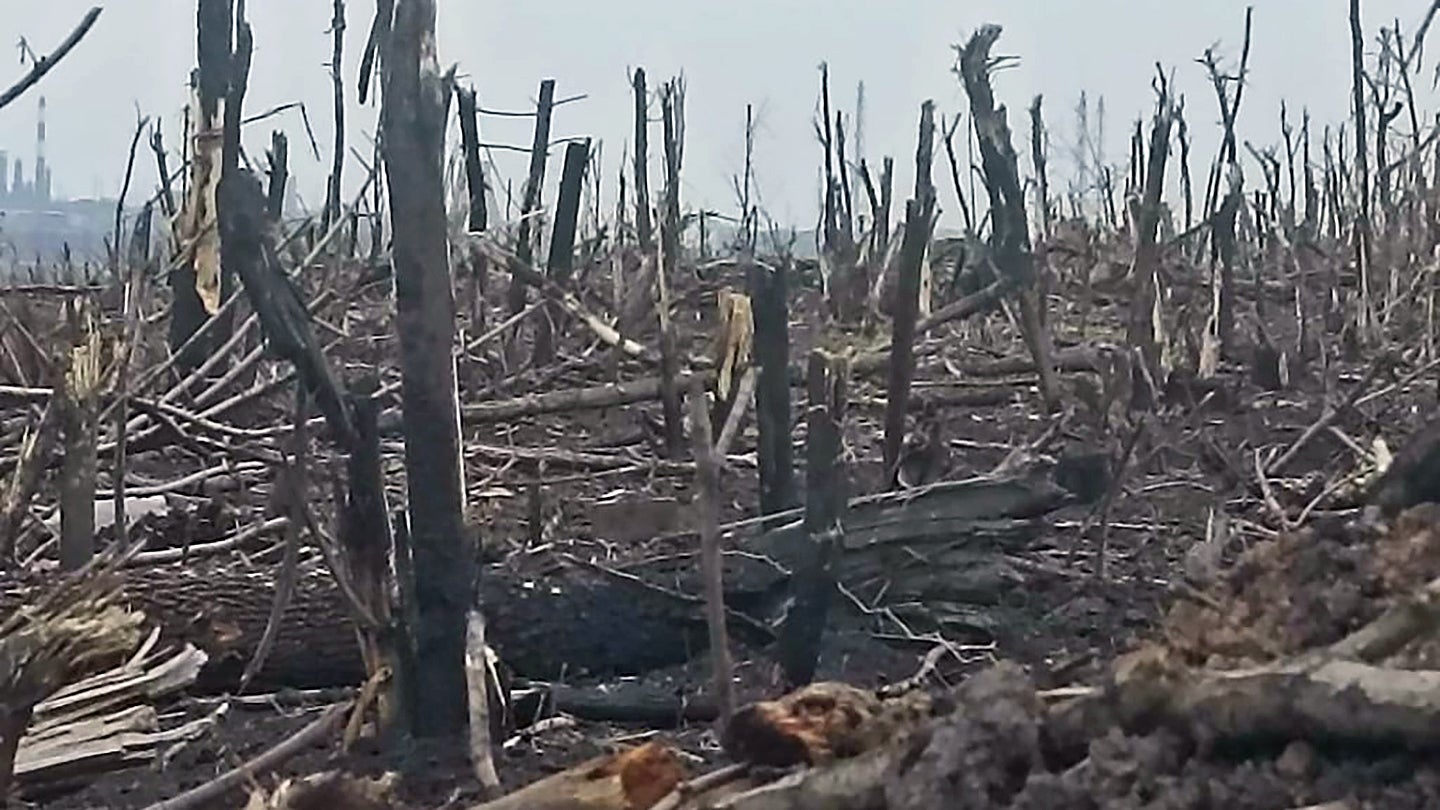 More than 450 years after it was created by Russian Tsar Ivan the Terrible as an outpost to ward off the Crimean Tartars, the city of Bakhmut is the bloodiest battlezone in Vladimir Putin’s nine-month-old all-out war on Ukraine.

Located on the Bakhmutovka River in Donetsk Oblast, the city that was once home to 70,000 is now largely an obliterated hellscape. Troops from both sides are dug into trenches in what was once was farmland, evoking memories of World War I.

Images emerged over the weekend showing the horrific conditions, as soldiers hunkered down in muddy, water-filled pits in frigid weather.

Waves of Wagner Group mercenaries, backed by mobilized reservists, are getting cut down as they rush toward Ukrainian positions. Ukrainian defenders and the remaining civilians, pinched on two sides by advancing Russian forces and under constant bombardment, are suffering heavy losses as well.

Gains on both sides are minuscule, measured in meters. Ukrainian troops are holding on after months of attacks, though Russian forces appear to be closing in.

“Bakhmut is just their desire that they want to achieve for eight months now,” Ukrainian Brig. Gen. Kyrlo Budanov, head of that nation’s Defense Intelligence Directorate (GUR), told The War Zone last month. “From the military standpoint, Bakhmut has a very favorable position because it opens further routes to such towns as Sloviansk [about 20 miles to the northwest], Kramatorsk [about five miles south of Sloviansk] and Chasiv Yar [about five miles southwest of Bahkmut].”

But with Russian losses in territory, personnel and equipment elsewhere in Ukraine, the ongoing onslaught in Bakhmut raises a lot of questions about why Moscow continues to incur such heavy costs there. Especially given Ukraine’s advantage as a better equipped and trained defender.

“The Russian military is still dealing with unrealistic political demands to show progress,” Michael Kofman, the director of Russian studies at CNA, a research institute in Arlington, Virginia, told The New York Times. “But given [the] poor quality of available forces and decreasing stocks of artillery ammunition, they are unlikely to be successful, because once again the Russian military appears to be feeding units piecemeal without adequate support.”

The offensive is taking a toll on both sides, each pouring in additional resources. Draining Ukraine is one likely Russian objective.

“Battles like Bakhmut consume forces that could be used elsewhere,” Kofman told The Times, adding that Russian forces are using people they deem ‘expendable,’ but even so, they cannot afford to waste that much artillery.”

There may be another reason for the fixation with Bakhmut.

The Guardian on Monday posited that the Wagner Group-led effort to take the city was in effect a vanity project, with a victory there seen as a way to boost the image of Yevgeny Prigozhin’s mercenary group in Putin’s inner circle.

Whatever the case, the brutal battle wages on there without abatement.

The Pentagon is considering a Boeing proposal to send Ground-Launched Small Diameter Bombs, or GLSDB, to Ukraine, Reuters reported. You can read more about those weapons and their potential implications in our report here.

“[W]e will stand with Ukraine for as long as it takes,” he said. “Next year we will maintain or even increase our military aid. And we will provide new support for air defense, to protect the Ukrainian people and the critical infrastructure they rely on. By protecting Ukraine, we protect ourselves.”

Kyiv also received support in the form of a visit by the foreign ministers of Estonia, Finland, Iceland, Latvia, Lithuania, Norway and Sweden.

Ukraine’s effort to retake the Kinburn Spit, a narrow tip of land jutting out into the Black Sea and Russia’s last stronghold in Mykolaiv Oblast, continues, according to Nataliya Humenyuk, spokesperson for Ukraine’s Operational Command South.

Among other things, the operation depends on weather conditions, she said, according to the UNITED24 Telegram channel.

“All this is a very wide range of factors that need to be taken into account and wait for the official information of the General Staff,” she said. “Only they can tell what is really happening and when you can really rejoice.” You can read more about that operation here.

Elsewhere on the battlefield, in the wake of their retreat across the Dnipro River, Russian forces continue to shell Kherson City, as well as across the Donetsk, Dnipropetrovsk, Luhansk and Zaporizhzhia oblasts, killing civilians. In addition to defending against Russians in the ongoing battle for Bakhmut in Donetsk, Ukraine is conducting a counteroffensive in Luhansk. Here are some of the key takeaways from the latest Institute for the Study of War assessment.

The battle for Bakhmut, in which both sides trade huge artillery volleys, highlights the precarious nature of such protracted engagements.

Not only are both sides facing shortages of munitions, but Ukraine is facing a challenge keeping its howitzers operating. A third of of about 350 howitzers donated to Ukraine are out of service at any given time, The New York Times reported.

“Ukrainian troops fire thousands of explosive shells at Russian targets every day, using high-tech cannons supplied by the United States and its allies. But those weapons are burning out after months of overuse, or being damaged or destroyed in combat, and dozens have been taken off the battlefield for repairs, according to U.S. and Ukrainian officials.”

Providing power to its citizens continues to be a problem for Ukraine with Russia’s ongoing attacks on its energy and water infrastructure. Blackouts resumed across the country on Monday, according to the Kyiv Independent.

Kyiv has been particularly hard hit, with electricity switched on for limited periods just twice a day to conserve energy.

The expanse of the blackouts across Ukraine comes into sharp focus when seen from space.

As a result of these attacks, discussions are taking place between Germany, Poland and NATO to move German-provided Patriot air defense systems from Poland’s border with Ukraine into Ukraine itself.

Germany said on Friday it was discussing with its allies Poland’s request that German Patriot air defense units should be sent to Ukraine, after NATO’s chief suggested the military alliance might not oppose such a move, Reuters reported.

“We are talking with our allies about how to handle Poland’s … suggestion,” a German government spokesperson told reporters in Berlin.

Berlin offered Warsaw the Patriot system to help secure its airspace after a stray missile crashed and killed two people in Poland earlier this month. You can read more about that here.

Russia too is moving air defense systems, in this case to Belarus, its client state on Ukraine’s northern border.

“At least 15 Tor-M2 air defense systems” are being sent from Russia to Belarus, according to the Belaruski Hayun Telegram channel. A train full of them departed from the Yeysk railway station in the Krasnodar Oblast of Russia on Nov. 25, headed for the Lesnaya railway station In Brest, Belarus.

In an effort to overwhelm Ukrainian air defenses, Russia is reportedly still firing nuclear-capable AS-15 Kent cruise missiles into Ukraine. Instead of nuclear warheads, they contain ballast similar in weight. You can read more about that effort in our previous report here.

A train load of Russian T-80-U tanks, in winter camouflage, was seen headed to the front, according to the Clash Report.

But there are concerns being expressed on Russian Telegram channels about an interruption in supply chain distribution from China to Russia along the Ussuri Highway.

But Russian An-124 “Ruslan” heavy cargo jets appear to be making 10 trips a week between Russia and China.

“The standard flight runs along the route Moscow-Novosibirsk-Zhengzhou-Novosibirsk-Moscow,” according to Defense Express. “The final destination of one of the flights was Urumqi. Overall, Zhengzhou is a powerful logistics and industrial hub and a powerful industrial high-tech zone, including units of Chinese defense giant Norinco. Urumqi is also the production site for a number of industrial giants.”

“Such regular flights, especially with the An-124 Ruslan aircraft with transponders turned off, as well as posts on Chinese social networks lead to the conclusion that the Russian Federation is sending aircraft for military cargo. Moreover, for the one that is urgently needed right now and cannot wait for it to be delivered by rail.”

We reached out to officials in Ukraine and at the Pentagon and National Security Council for any insight into what cargo China is transferring to Russia. We will report back with any response provided.

Russians, meanwhile, are training mobilized soldiers and volunteers on running a fuel convoy.

A gesture to the moms of the fallen to honor Russian Mother’s Day apparently didn’t go so well, with gifts of towels and postcards seemingly not appreciated.

Russia’s mobilized reservists, who have long complained about a lack of proper equipment and training, are apparently receiving training in the art of war from … airsoft enthusiasts.

Photos have emerged on social media of what appears to be a Russian Su-34 Fullback shot down in the Kherson Oblast.

The Fullback likely belonged to the 47th Bomber Aviation Regiment and appeared in a 2016 Russian Defense Ministry video, seen taking off from Khmeinim Air Base in Syria armed with Kh-35U missiles, according to Guy Plopsky.

Contrary to reports by the Ukrainian Energoatom atomic power agency, Putin mouthpiece Dmitry Peskov denied that Russia is withdrawing from the Zaporizhzhia Nuclear Power Plant, Europe’s largest, which it has occupied since the beginning of Moscow’s full-on invasion.

Ukraine is also putting captured equipment to good use, in this case, a former Russian MT-12 Rapira anti-tank gun.

What used to be a Russian T-80 tank is now just a pile of twisted metallic refuse.

In a video that Muslims will find highly offensive, Ukrainian troops are shown slathering ammunition, which will be used against troops aligned with Chechen leader Ramzan Kadyrov, with lard.

Rivers have served as defensive barriers throughout this conflict and efforts to cross them have played big roles for both sides, each of which has destroyed bridges. Both sides have worked to ford rivers by alternate means, including pontoon bridges. In the video below, Ukrainian troops are seen building a pontoon bridge to get across the Inhulets River at Darivka in Kherson Oblast.

Despite Russia’s ongoing difficulties in Ukraine, its propagandists remain full of bluster, with at least one pundit pushing the idea that Russia will one day absorb its neighbors “into one big Russian home.”

A photoshopped image of her apparently appeared in a Russian recruiting effort.

It is unclear whether this is a real effort or someone’s idea of a joke, but clearly Grey is not amused.

It wasn’t the first time Grey was dragged into the fray.

The post Ukraine Situation Report: The Bloody Battle For Bakhmut appeared first on The Drive.