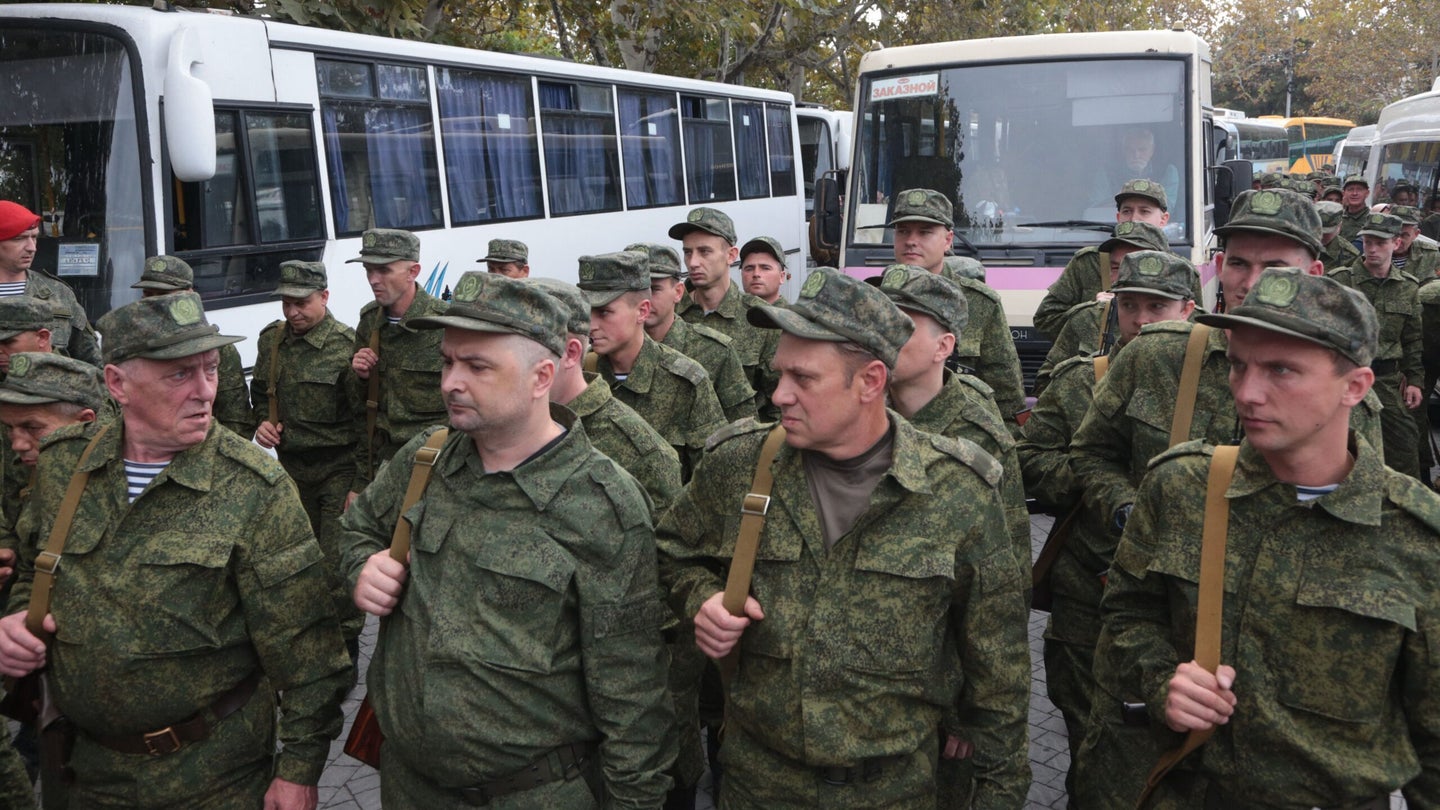 Russian forces are fighting a defensive war against determined Ukrainian forces that continue to make “deliberate movement forward” along the entire frontline from Kherson in the south to Kharkiv in the north, according to a Pentagon spokesman.

“The way I would characterize the North and the South is on the Russian side is essentially defensive at this stage,” Air Force Brig. Gen. Patrick Ryder said Sept. 27 during a press conference at the Pentagon.

“In the Donbas region, the Russians, with elements of the Wagner Group, are attempting to essentially take territory – we’ve seen hundreds of meters in some cases – but nothing that I would consider significant. The Ukrainians have so far done a good job of holding a line there and repulsing those defensive operations.”

Video continues to emerge of Ukrainian forces advancing on Russian positions in several sectors of the front line, including the footage below from the Kharkiv region. The video shows several Russian troops surrendering in a forest encampment made of translucent plastic sheets strung between trees.

Ukrainian forces are slowly but surely liberating town after town along their twin axes of advance in the north and south, including Kupyansk, home of one of the country’s largest rail stations. The yellow-and-blue flag of Ukraine was raised outside the station on Sept. 27 by a soldier standing on the Russian tricolor it replaced, as seen in the video below posted to social media by the Ukrainian Ministry of Defense.

Russian troops conscripted through Vladimir Putin’s recent mobilization efforts are arriving on the frontlines with little or no training and few supplies. The draftee in the video below claims he was sent into combat near Kherson with no training at all.

Elsewhere, Russian troops complain of being dumped near the fighting with nothing but assault rifles. Cursing their commanders, the Russian recruits in the video below claim they were supplied no food or water before being sent to the front.

As Ryder suggested last week, pouring hundreds of thousands of untrained, poorly equipped recruits into an active combat zone likely will further stress a Russian war machine that has struggled with discipline, logistics, and maintenance since this war began.

Russia still must notionally feed, clothe, transport, and provide arms and communications to these recruits, all things it has struggled to provide its regular military units.

“It’s not a very promising move from the military point of view,” Rau said Sept. 27 at the Center for Strategic and International Studies think tank in Washington, D.C. “I’m not a military analyst, but following common sense, it doesn’t seem a very good solution because if the Ukrainians managed to defeat well-trained and well-equipped Russian soldiers, what’s the chance that those that are worse … are going to prevail? I suppose it’s rather unreasonable to expect a breakthrough as the result of a mobilization.”

Russia is wholly unprepared to support its newly mobilized source that at least one unit was promised only uniforms and body armor. In the video below, a Russian officer instructs recruits to source their own medical supplies, including tampons as bandages for gunshot wounds.

Reports are proliferating that Russian recruits are being sent to war immediately after being drafted, without training or equipment, according to Anton Gerashchenko, an advisor to Ukraine’s interior minister.

The Russian prisoner of war in the video below claims to have been mobilized on Sept. 21 and captured less than a week later in Ukraine.

Before we dive into the recent developments in this dynamic conflict, take a moment to catch up on our previous rolling coverage here.

As expected, Russian-allied officials in the occupied regions of Kherson, Zaporizhzhia, and the self-declared Peoples Republics of Donetsk and Luhansk announced near-total approval for joining Russia among their citizens. In what the U.S. and NATO have called “sham” referendums on Russian annexation of the regions, a laughable 98 percent of the vote was reportedly in favor of joining Russia.

International supporters of Ukrainian sovereignty immediately dismissed the results. Israel’s foreign ministry said it supports Ukraine’s territorial integrity and sovereignty and will not recognize the results of the referendums.

Putin is primed to announce the annexation of occupied Ukrainian territories during an address scheduled for Sept. 30, according to the Kyiv Independent news service.

Annexing these regions, however illegitimate the move may be, could provide an excuse for conscripting soldiers from the occupied populations. That could deal another blow to already seemingly dismal Russian morale in the ranks and support for the war at home, especially in frontier republics where ethnic minorities are being disproportionately conscripted to participate in the war.

The Russian military appears to be doing just that in occupied Crimea. Photos of recruits, many confused-looking older men, in formation wearing military uniforms equipped with little more than an AK-74 assault rifle.

Perhaps recognizing that Russia has embarrassingly mismanaged its campaign of conquest, Putin has threatened the use of nuclear weapons over the Ukraine conflict. Ryder said the Pentagon takes those threats seriously but does not yet foresee a Russian nuclear strike in the works.

“At this stage, we’ve not seen anything that would cause us to adjust our own nuclear posture at this time,” Ryder said. “As we’ve said previously, our focus continues to remain on supporting Ukraine in their fight and working closely with our allies and partners in terms of Russian force posture.”

Polish Foreign Minister Rau said that European countries positioned in Russia’s geographic shadow have no choice but to take Putin’s nuclear threats seriously. He said Putin’s potential use of nuclear weapons to avoid defeat stands in stark contrast to the U.S. dropping atomic bombs on Japan to hasten an already determined victory.

“If Putin is threatening to use his nuclear tactical nuclear weapons, we have to realize that this event would be a completely different situation, because it would be the use of nuclear weapons by the side which is rather losing rather than winning the war and not at the very end of the war, but in fact in the middle of the war. So it’s a completely new situation. And the fundamental question is, what would this bring for Russia?”

“The answer is,” Rau added, “following the emerging consensus of NATO member states, a conventional response in Ukraine.”

The situation has develoved to the point that some NATO member states, including Bulgaria, are telling their citizens to leave Russian territory as quickly as possible.

Russian officials at the highest level continue to allude to the possibility of nuclear weapons being put to use. Russian Prime Minister Dimitry Medvedev said on Sept. 27 that his country has the right to use nuclear weapons in Ukraine “if we or our allies are attacked with this type of weapon or if aggression with the use of conventional weapons threatens the very existence of our state,” according to the Kyiv Independent. Notably, Medvedev includes the use of conventional weapons – with which Ukraine has routed Russia’s invading army in some areas – among his justifications. Medvedev also questioned whether NATO would respond if Russia used nuclear weapons.

Contrary to reports yesterday, the U.S.-donated National Advanced Surface-to-Air Missile Systems, or NASAMS, are not yet in Ukraine. The first is expected to arrive there within the next two months, Ryder said. The remaining six NASAMs promised Kyiv will be delivered “in the future,” Ryder said but did not give a timeline.

“Those will be longer-term,” he said. “These are the ones produced by industry.”

Ukraine has sought those systems to protect its cities from Russian missile bombardment, which continued Sept. 27 with an attack on the liberated city of Kharkiv. Five Russian missiles reportedly landed in the city, striking an electrical station, knocking out power, and starting a massive fire.

Ryder confirmed that Iranian-produced drones are in Russian service in Ukraine, where unmanned aerial systems (UAS) are used for strike and reconnaissance missions.

“We do assess that the Russians now are using the Iranian drones. … We do assess that they are now using them in Ukraine,” Ryder said. “In terms of their effectiveness, I don’t want to provide a battle damage assessment here from the podium or get into specific intelligence other than to say again, we’ve seen them employ them. We’ve also seen reports of the Ukrainians shooting down some of these drones, and again, I’m not going to get into specific numbers, but we assess that those are credible. … It’s just indicative of the Russians employing a capability that we know they’ve sought from Iran. And they’re using the way they indicated they would use them, for both kinetic attacks and ISR [intelligence, surveillance, and reconnaissance].”

Video has emerged showing Ukrainian surface-to-air missiles taking down one of the Iranian Shahed-136 drones used by Russian forces.

Russia’s troops in the field continue to provide footage of laughably incompetent conduct, including the soldier in the video below firing a rocket-propelled grenade straight into a tree just yards in front of his position.

Meanwhile, Estonian Prime Minister Kaja Kallas took time to train on the Javelin anti-tank guided missile system. Thousands of the Lockheed Martin-made ATGMS, as they are commonly known, have been provided to Ukraine by the U.S. and were standout weapons in the early days of the war.

Russia remains a significant supplier of vehicles and weaponry to opposing Ukrainian forces. One recent acquisition was a Russian Msta-SM2 152mm self-propelled howitzer, captured by Ukrainian troops near Izium in near mint condition.

The United States has committed another $457.5 million in civilian security assistance aimed at enhancing the operational capacity of Ukrainian law enforcement and criminal justice agencies, the U.S. State Department announced on Sept. 27.

Since mid-December 2021, the United States has committed more than $645 million in assistance that has “provided a tangible, positive impact on our Ukrainian law enforcement and criminal justice partners, including the National Police of Ukraine (NPU) and State Border Guard Service,” the state department said in a statement. The funding will go toward personal protective equipment, medical supplies, and armored vehicles to reduce Ukrainian casualties.

“In addition to expanding our direct assistance to Ukrainian law enforcement, a portion of this new assistance will also continue U.S. support for the Ukrainian government’s efforts to document, investigate, and prosecute atrocities perpetrated by Russia’s forces,” the State Department said.

Vladyslav Zhaivoronok, a Mariupol defender in the Azov Regiment’s ranks who was captured after the fall of the Azovstal Steel Plant, is in Washington, D.C., visiting with members of Congress. He was released from Russian captivity due to a recent prisoner exchange, rehabilitated, and is now advocating for Ukrainian prisoners of war.