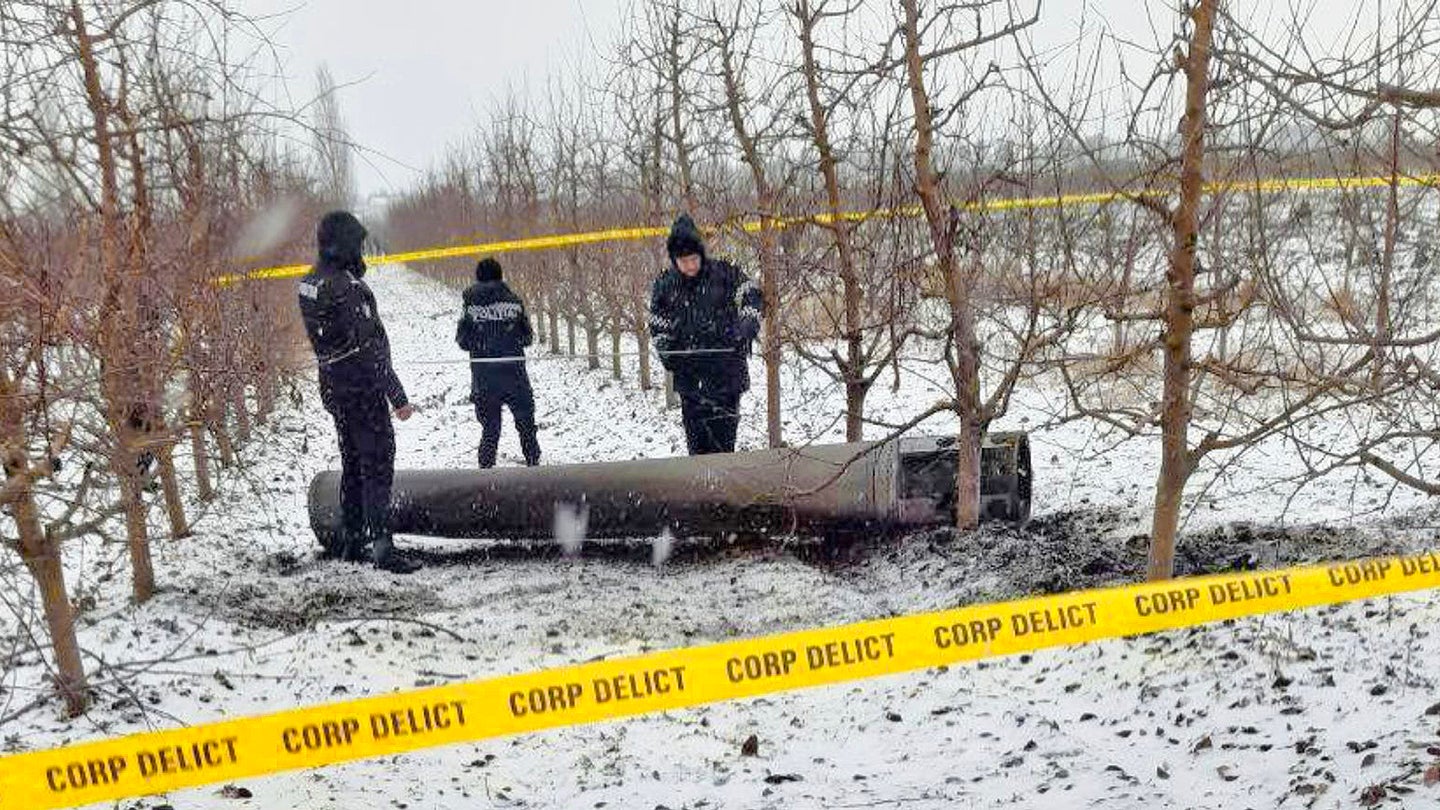 Moldova today once again experienced the fallout of the war across its border as authorities there found a missile component that had fallen in an orchard about a mile and a half from Ukraine.

The component, found near the town of Briceni, did not cause any injuries or damage, according to the Moldovan NewsMaker website. Its origin has not yet been officially determined. But the Russian state media outlet RIA Novosti reported on its Telegram channel that the component was initially identified as part of an S-300 air defense missile by a Russian expert, who likened this situation to the deadly Nov. 15 incident in Poland. That’s when two people in the Polish town of Przewodów were killed after a missile – most likely fired by Ukrainian air defense – strayed over the border.  You can read more about that in our coverage here.

Given that Russia launched another large-scale missile attack on Ukraine on Monday, it is quite possible that the component, apparently found undamaged, was fired by a Ukrainian air defense system in response to that attack.

Oliver Alexander, an open source intelligence researcher, identified it as the booster section of an S-300 air defense missile that likely fell to earth after a successful or failed interception of a Russian missile. Alexander told The War Zone he made his assessment based on comparing this image with pre-launched S-300 missile images.

“The fin attachment points and internal rudders for gas-dynamic control are visible,” he said. “Seeing as it landed as intact as it did, it seems that it fell to earth instead of crashing into the ground as part of the complete missile. After the warhead detonated, it just fell to earth.”

The Ukrainian Defense Ministry’s claim that some of the missiles took circuitous routes, including to Ukraine’s western region, lends credence to that Alexander’s assessment.

In addition to the missile component landing on its territory, Moldova, which is linked to Ukraine’s power grid, said its power supply was affected by the latest Russian missile wave.

“In connection with the massive attacks on Ukraine, Moldelectrica reports interruptions in the electricity system. Power outages are possible,” the company said in a statement.

Ukrainian officials have yet to officially comment on the incident in Moldova, but the Ukrainian Defense Ministry said it shot down 60 of the 70 missiles fired by Russia today.

This is the latest incident where the war has spilled over the border.

On Oct. 31, Moldovan officials said a missile shot down by Ukrainian air defenses “fell in the northern end of the town of Naslavcea in the Republic of Moldova, located on the border with Ukraine.”

“At the moment, there are no registered victims,” the statement added, “but several windows of some houses in Naslavcea were broken.”

And during the massive Oct. 10 Russian attack on Ukraine, at least three missiles flew over the territory of Moldova, according to Ukrainian Pravda.

Though two people were killed and three injured when a Russian missile hit Zaporizhzhia, the latest Russian barrage apparently caused comparatively little damage to the power infrastructure, according to Ukrainian media. Most of the problems seemed to be temporary.

“Partial or temporary blackouts were also reported in the Cherkassy, Vinnytsia, Kryvy Rih, Lviv, Ternopil and Mykolaiv regions, in some cases due to hits to the power grid and in others because of regional switch-offs to prevent grid overloads,” the Kyiv Post said, citing local news reports. “In Lviv Maksym Kozytsky, [the] head of the regional defense administration, issued a statement saying that social media reports of missile impacts in the region were simply wrong, although power service might be interrupted because of grid damage elsewhere.”

“Anti-aircraft missile units, aviation, mobile fire groups of the Air Force of the Armed Forces of Ukraine and other components of the Defense Forces were involved in repelling the air attack,” the Ukrainian MOD said.

Ukraine, on the other hand, apparently inflicted damage on the Russian bases where some of those aircraft were launched.

Explosions shook two different Russian airbases, Engels and Dyagilevo, earlier today. The Russian Ministry of Defense (MOD) claimed that Ukraine used converted Soviet-era Tu-141 jet-powered unmanned aerial vehicles to prosecute the attacks, but that the drones were intercepted by Russian air defenses. Nevertheless, the attacks have caused some loss of life, and reportedly damaged one of the Backfires, although the extent of the material damage remains ambiguous for now. You can read more about that in our coverage here.

While the Russians claim that Ukraine used old Tu-141 reconnaissance drones turned into improvised cruise missiles to attack the air bases, Ukraine says it is developing its own line of long-range attack drones capable of hitting targets 1,000 kilometers (621 miles) away.

The Ukrainian state defense firm Ukroboronprom conducted a number of successful tests of the Ukrainian strike drone with that range, said spokeswoman Nataliya Sad, according to Ukrinform.

“Today, a number of stages of successful tests are behind us,” Sad said. “In accordance with the instructions of the Chief of the General Staff of the Armed Forces of Ukraine, we are moving to the stage of tests under the effect of [electronic warfare] EW. After we successfully test the drone under the influence of EW, we hope to be able to test it in combat use. We promised by the end of this year, we are trying to fulfill this promise.”

Overall, the German-provided Gepard 1A2 self-propelled anti-aircraft gun systems have been a big boost to Ukrainian air defenses. Germany has promised Kyiv seven more. Berlin has now delivered 30 of the tracked Gepard vehicles, which sport a pair of 35mm automatic cannons mounted on a rotating turret that also features an integrated radar, according to the German government’s ongoing tally of military and humanitarian aid it has sent to Ukraine. You can read more about that here and watch one in action in the video below.

Today’s attack took place on the 28th anniversary of the signing of the Budapest Memorandum by Russia, Ukraine, the U.S., and the U.K., in which Ukraine agreed to give up its stockpile of nuclear weapons left over from the collapse of the Soviet Union, as well as nuclear-capable aircraft and cruise missiles, in return for a guarantee of security.

The signatories agreed “to refrain from the threat or use of force against the territorial integrity or political independence of Ukraine, and that none of their weapons will ever be used.”

The confluence of events was not lost on Ukrainian President Volodymyr Zelensky.

“With today’s missile attack Russia marked the anniversary of the Budapest Memorandum,” Zelensky wrote on his Telegram channel. “The fate of this document gives answers to many current questions about Russia. Simply signing something with these terrorists will not bring peace. They will certainly break any agreements reached with them. Giving up any element of someone else’s security to Russia means new war.”

“Therefore a principled continuation of the existing policy of conscientious states of the world is necessary: it is only the dismantling of Russian terrorist capacities, liberation of all our territories and holding the murderers to account that will bring peace.”

“I believe we will come to this.”

On the battlefield, very little territory has changed hands over the past 24 hours as Ukraine vows to continue staying on the offensive across the east and south during the winter with Russia largely on its heels. Russia, meanwhile, continues to press its attacks against Ukrainian troops in Bakhmut and elsewhere in the Donestk Oblast as well as around Svatove and Kreminna in the Luhansk Oblast.

Here are some key takeaways from the latest Institute for the Study of War assessment:

Though Russia isn’t having much success on the battlefield, Moscow mouthpieces are crowing about Russian President Vladimir Putin’s drive across the Kerch Bridge, his prized, $4 billion span linking the mainland and the occupied Crimean peninsula. That bridge, you will recall, is still being repaired after being badly damaged Oct. 8.

As Russia celebrates Putin’s drive, his mobilized reservists are apparently still suffering, with scores reportedly held without food or water in a children’s camp.

Those who aren’t being held get to march around in the snow.

But at least they aren’t having ordnance dropped on them by Ukrainian drones and artillery, like these troops apparently are.

Or destroyed, along with their equipment, in a convoy, like these troops.

Finally, even while its troops are dying and getting wounded and its people are suffering after more than nine months of war, Ukraine continues to maintain a sense of humor.

The Ukrainian MOD this morning shared a video of one of its troops doing the Pikachu dance.

It was apparently inspired by the famously annoying pointy-eared yellow Pokemon creature.

The post Ukraine Situation Report: War Spills Over Into Moldova Again appeared first on The Drive.