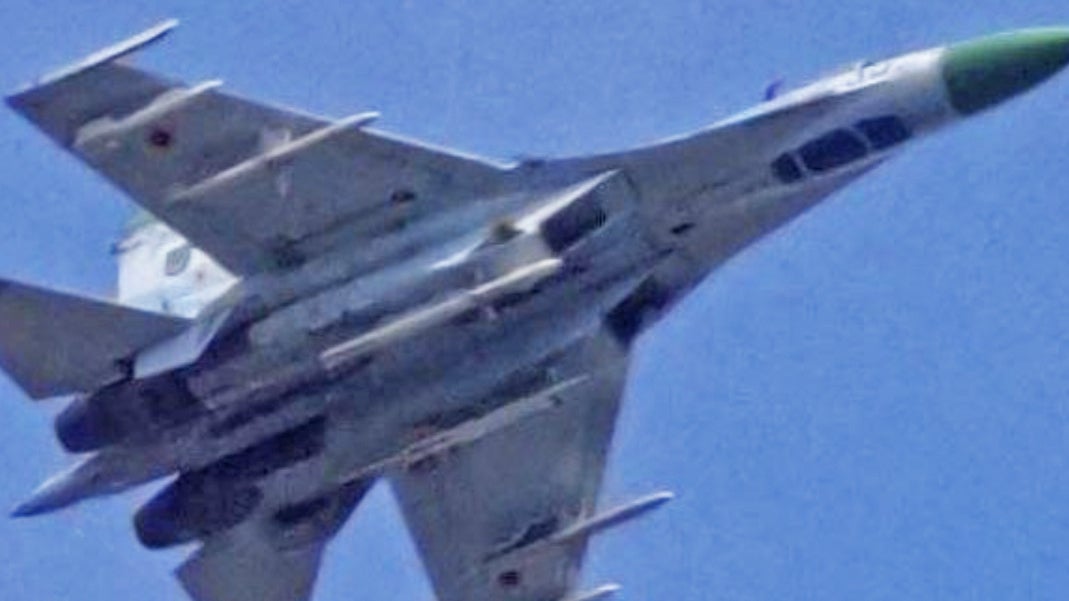 A recent image suggests that the Ukrainian Air Force has also now provided its Su-27 Flanker fighter jets with U.S.-made AGM-88 High-speed Anti-Radiation Missiles, or HARMs. This would make the Su-27 the second Ukrainian combat aircraft (that we know about) to get the missiles, after the MiG-29 Fulcrum. An official video showing Ukrainian MiG-29s firing HARMs appeared last week, and you can read more about it here.

It should be stressed that we don’t yet know for sure that the image is genuine and hasn’t been manipulated, but there is no particular reason to believe it’s not real at this time. We have also received verification from one source suggesting it is genuine. The date and location of the image remain unknown.

It shows a Ukrainian Su-27 from below, with HARMs carried on the inner underwing pylons, which are typically reserved for medium-range air-to-air missiles (AAMs). The outboard underwing pylons carry short-range infrared-guided R-73 (AA-11 Archer) AAMs, while the pylons on the engine intakes are loaded with extended/medium-range radar-guided R-27ER (AA-10 Alamo) AAMs. As seen below, the additional length of the R-27ER model (15 feet 8 inches overall) compares well to the AGM-88s, which are 13 feet 8 inches long, according to the U.S. Air Force. This, too, suggests the image is authentic.

As we have discussed in the past, anti-radiation missiles like the AGM-88 are primarily designed to home in on enemy signal emitters, especially air defense radars, especially those directly associated with surface-to-air missile systems, and neutralize them. Since early on in the conflict, the Ukrainian Air Force has made calls for a suppression of enemy air defenses (SEAD) capability, to counter the threat of Russia’s extensive surface-to-air missiles.

Apart from the HARMs, the Su-27 is somewhat unusual in having what appears to be an older-style paint scheme, perhaps the ‘splinter’ scheme, rather than the more recent ‘digital’ camouflage, including a fake cockpit canopy painted under the forward fuselage, designed to make it harder for an enemy pilot to ascertain the jet’s disposition during a within-visual-range dogfight.

The green radome and tailfin caps are also something of a rarity, mostly being seen in the earlier parts of the Su-27’s Soviet and post-Soviet career. However, it seems that at least some Ukrainian Flankers are again receiving green radomes and fin caps as they undergo refurbishment. It could also be the case that this is an older airframe that has recently been reactivated and retains its original color scheme.

Interestingly, at least one other Ukrainian Su-27 was seen during the earlier fighting in the eastern Donbas region in 2014 with both a green radome and false canopy, albeit this time in an air-to-air configuration.

Regardless, the conclusion seems to be that Su-27s are now also wielding HARMs as the Ukrainian Air Force continues to develop its recently introduced western suppression and destruction of enemy air defenses capability.

The introduction of HARM to the Ukrainian Air Force is something that we have covered extensively in recent weeks. First, the existence of HARMs in Ukraine became clear via unofficial channels. More evidence of missile wreckage subsequently emerged online and finally, U.S. officials confirmed the transfer of these weapons and that they were being used by “MiG aircraft.” While that statement was taken to refer to the MiG-29 — the only Mikoyan type currently flown by Ukraine — it was another couple of days before officials finally confirmed that Ukraine’s MiG-29s had received the capability.

Now, it seems that the Su-27 has joined them. Of course, it could conceivably be the case that this was the case from the start. A Western official referring to any kind of Soviet-designed fighter as a “MiG aircraft,” as a blanket term, would not be unheard of, after all.

It could also be the case that the Su-27 seen in the image was undergoing some kind of trials work, perhaps with a view to future integration, and is not, so far, being used in combat from this platform. However, the presence of the AAMs on the aircraft suggests it may very well have been flying a combat mission when photographed.

The video that we have seen so far of the MiG-29s armed with HARM suggests that these missiles were integrated onto that aircraft in a fairly low-tech manner. Although the cockpits of those jets had been fitted with commercially available Garmin satellite navigation devices, these are not a prerequisite for HARM and are simply used for more accurate navigation.

There is also some evidence that on the MiG-29 at least, the aircraft’s weapons computer ‘thinks’ the HARM is an R-27 AAM, with the launch selection for the anti-radiation missile apparently the same as for the air-to-air missile. There have also been suggestions that, within the cockpit, the HARM is actually indicated as an R-27P/EP, a lesser-known (air-to-air) anti-radiation version of the missile, but it’s not clear if that would be a prerequisite for use.

Nevertheless, the finer details of how the Ukrainian Air Force is actually employing its HARMs, from target identification to launch, remain unclear. Some of the various different options for employing the HARM from a MiG-29 are discussed in this previous article, and the same would apply to the Su-27, which carries the same basic weapons as the MiG-29.

However, if the HARMs are being used in the so-called Pre-Briefed mode, which seems likely, then the Su-27 would actually offer a number of advantages over the MiG-29. In this method, the HARM is fired ‘blind,’ from as long a range as possible, with the launch aircraft flying at high speed. This provides a lofted trajectory that keeps the missile in the air longer, giving the missile seeker more time to acquire a target.

In terms of performance and range, the Su-27 is superior to the MiG-29 in certain respects.

With more power, the Su-27 can typically fly faster than the MiG-29, although their maximum speeds are broadly similar, around Mach 2.3 when not carrying any weapons, but this top-end is not really relevant to actual operations. The Su-27 can also fly somewhat higher than the MiG, in most scenarios. This could well help make it a more effective HARM-shooter.

The Su-27 offers a lot more range than the MiG-29, which would allow it to range much further from its base, loiter for a period of time, and target Russian air defense systems closer to the front lines. If there is external intelligence being fed to the Su-27 shooters on active threat emitters, this loiter time could be very beneficial. It can also carry a more potent air-to-air load while still carrying HARMs, compared to the MiG-29.

It seems Ukraine has already called upon the long range of the Su-27 to fly some specialist missions in the past, too. Most notably, these jets were used for a daring attack on Snake Island, apparently using freefall bombs in a high-speed, low-level delivery.

The obvious drawback of using the Su-27 for SEAD/DEAD is the fact that this remains the premier air defense fighter in the Ukrainian Air Force and is urgently needed to protect key objectives against attack by Russian aircraft and cruise missiles.

Prior to the Russian invasion in February, there were fewer than 25 Su-27s in active service, operated by two brigades based at Myrhorod and Ozerne. Around 25 more Flankers were non-serviceable.

Of the active aircraft, less than a dozen had been modestly upgraded, with improvements to the N001 radar, boosting its range and electronic counter-countermeasures capability, and overall reliability. Some additional air-to-ground capacity is added too.

Since the latest invasion, open-source data suggests that at least four Ukrainian Su-27s have been lost in the fighting, at least one of which was on the ground at Ozerne.

One fully armed Su-27 that landed in Romania on the first day of the conflict, for unknown reasons, was later returned to Ukraine.

Taken together, the small fleet of Su-27s available to Ukraine, combined with their limited potential against technologically superior Russian fighter jets, only reinforces the fact Kyiv badly needs more modern Western fighters, like the F-16, with a strong argument to start training pilots and maintainers on new types sooner rather than later.

Until more appropriate SEAD/DEAD equipment becomes available, it looks as if the Su-27 has now joined the MiG-29 in Ukraine’s rapidly fielded HARM-shooting squad.

The post Ukraine’s Su-27s Appear To Be Wielding Anti-Radiation Missiles Now Too appeared first on The Drive.