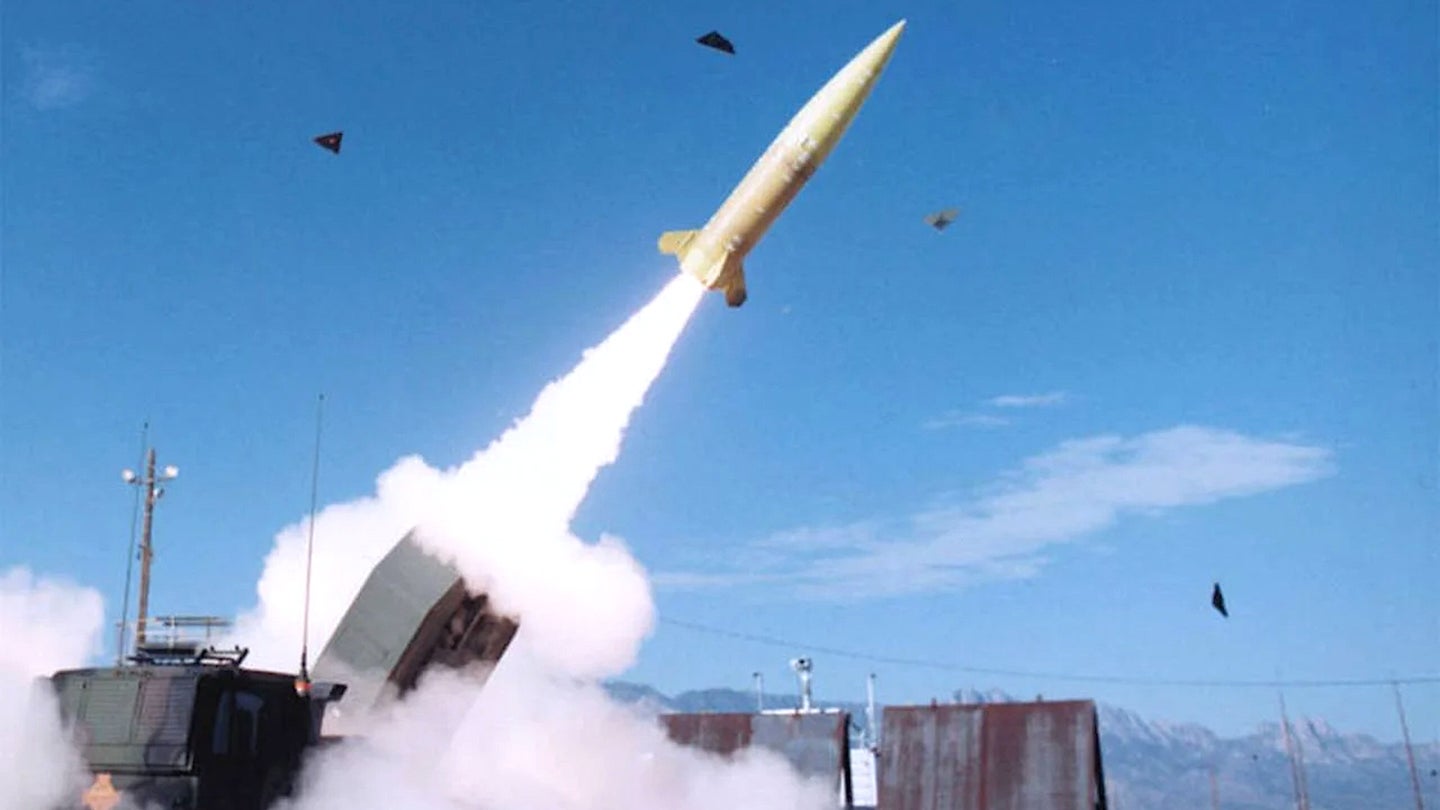 The M142 High Mobility Artillery Rocket Systems, or HIMARS, that the U.S. military has transferred to Ukraine have been modified to prevent them from firing any variant of the Army Tactical Missile System (ATACMS) short-range ballistic missile, according to a new report today.

ATACMS missiles have been high on the Ukrainian military’s wishlist for some time as they would greatly extend the range the country could hold Russian targets at risk. It can also destroy larger, more heavily fortified targets across its up to nearly 200-mile range. However, American officials have so far denied those requests for fear the missiles could be used to strike targets deeper inside Russia proper, which they worry could lead the Kremlin to seek to further escalate the situation in Ukraine or to retaliate more directly against the United States and its NATO allies.

The Wall Street Journal first reported on the modifications made to the 6×6 wheeled HIMARS launchers that have been delivered to Ukraine. As of November 23, the U.S. military had transferred or was planning to transfer a total of 38 HIMARS to the Ukrainian armed forces, according to the Pentagon. So far, these launchers, which have had a major impact on the battlefield already, fire M30A1 and M31A1 227mm precision-guided rockets, which have advanced fragmentation and unity high-explosive warheads respectively. Both types have a stated maximum range of at least approximately 43.5 miles (70 kilometers).

Versions of ATACMS have been developed over the years with warheads loaded with different types of submunitions, as well as large unitary high-explosive payloads, and with differing ranges. The shortest-range ATACMS variants can hit targets out to 87 miles (140 kilometers), while the longest-range types can find their mark out to 186 miles (300 kilometers).

You can read more about HIMARS’ general capabilities and the munitions that it can fire in this past War Zone explainer.

The full scope of the modifications made to U.S.-supplied HIMARS before their arrival in Ukraine is unclear. One possibility is that the launchers might simply have a dumbed-down version of the standard system’s software that does not have the functionality necessary to launch ATACMS. Minor physical changes could be made to prevent the missiles from working properly if loaded or prevent them from being loaded in the first place, too. However, ATACMS missiles come pre-loaded into launch canisters (often referred to as ‘pods’) that are intended to at least be dimensionally identically and also outwardly appear the same the those loaded with 227mm rockets, which could make physical alternations more complicated.

Without knowing for sure what has changed, it’s also not clear how readily reversible the modifications might be should U.S. policies surrounding the transfer of ATACMSs to Ukraine change in the future.

The Journal‘s report raises separate questions about whether or not other alterations may have been made to otherwise limit the capabilities of HIMARS launchers. For instance, it might be possible to integrate some kind of geofencing into the system’s software that could prevent it from accepting target coordinates for locations in Russia even with M30/M31-series rockets.

“Due to operational security considerations, we do not comment publicly on the configuration of systems provided to Allies and partners,” U.S. Air Force Brig. Gen. Patrick Ryder, the Pentagon’s top spokesperson, told The War Zone when asked about The Journal‘s report. “The United States remains committed to providing Ukraine the capabilities it needs to counter Russian aggression.”

The Journal had received a virtually identical statement when it asked about the modifications for its story.

It’s worth noting that the Ukrainian military has also received versions and derivatives of the U.S.-designed M270 Multiple Launch Rocket System (MLRS), a tracked launcher that can fire the same suite of mention as the HIMARS. However, those vehicles have all come from countries – the United Kingdom, Germany, and France – that have never operated ATACMS. So, it’s unclear if any of these launchers ever had any residual capability to fire ATACMS or have now been similarly modified to prevent them from doing so.

It is interesting to point out, especially since the U.S. government does not seem to be inclined to send ATACMS to Ukraine itself, at least at present, that the modifications to the HIMARS launchers are also intended to rule out the possibility of Ukrainian authorities obtaining the missiles from a third source. Outside of the United States, ATACMS variants are in service with the armed forces of Bahrain, Greece, Poland, Qatar, Romania, South Korea, Turkey, and the United Arab Emirates. Of course, any such third-party transfer, if done legitimately, would still require approval from American authorities.

Overall, the modifications are “U.S. officials said, a precaution the Biden administration says is necessary to reduce the risk of a wider war with Moscow,” according to The Journal. “They also reflect apprehensions among administration officials that their Ukrainian partner might stop keeping its promise not to strike Russian territory with U.S.-provided weapons.”

U.S. officials have publicly stated in the past that American military aid has come along with stipulations that it not be used to attack Russia proper. Russian-occupied areas of Ukraine that the Kremlin has declared to be its sovereign territory, including Crimea, are fair game. As such, even with those stipulations, Ukraine has remained interested in acquiring ATACMS, among other things, ostensibly to help expand its ability to target Russian forces deeper behind the front lines in the eastern and southern portions of the country.

The U.S. government’s reticence to transfer ATACMSs to Ukraine may also have a technical security aspect to it. Newer versions of the ATACMS family remain in active service with American forces, including with forward-deployed units for use in potential flashpoint conflicts, such as any that might erupt on the Korean Peninsula.

There have been indications that U.S. officials might be willing to consider alternatives to ATACMS that are both less capable and potentially less sensitive, but that would still offer Ukrainian forces additional extended-range strike capabilities. Last week it was reported the Pentagon had received a proposal from defense contractor Boeing to supply Ground-Launched Small Diameter Bombs (GLSDB). The GLSDB, which Boeing developed together with Swedish firm Saab, can be fired from HIMARS and MLRS launchers and has an ATACMS-like maximum range of some 94 miles (150 kilometers). The weapon utilizes the precision-guided GBU-39/B Small Diameter Bomb as its payload, which has seen widespread combat use with American forces over the past two decades, including in Afghanistan, Iraq, and Syria, but is not in U.S. military service. You can read more about GLSDB here.

There have been reports that the Ukrainian government has obtained and/or is seeking to obtain additional precision-guided ground-launched stand-off munitions from other sources completely untethered to the U.S. government.

The Wall Street Journal‘s report on the modifications to the HIMARS to prevent them from firing ATACMS comes at a time when Ukraine has been seeing pressure from many of its international partners, including the U.S. government, to at least signal a willingness to negotiate an end to the conflict with Russia. Ukrainian authorities have recently publicly presented demands for a peace deal, which include a call for a full restoration of the country’s pre-2014 territorial integrity, something that is, at least presently, a non-starter for the Kremlin.

No matter what, Ukrainian forces have demonstrated on multiple occasions their ability to strike relatively deep into Russian-occupied areas of Ukraine and Russia itself without the help of ATACMS. Just today, Russia’s Ministry of Defense said that Ukraine launched strikes on two separate air bases hundreds of miles inside Russian territory, claiming they had done so using Soviet-era reconnaissance drones converted into ad hoc cruise missiles. You can find more about what we know about those incidents so far here. The Ukrainian armed forces also say they have been testing a new drone that they claim will be capable of striking targets up to 621 miles (1,000 kilometers) away.

Over the past eight months, even without deliveries of ATACMSs, Russian forces have had no issues escalating their attacks on Ukraine, either. Russian bombers and other aircraft, as well as warships, launched at least 70 missiles at targets in Ukraine just today in a new wave of strikes targeting the country’s power grid. This campaign of strikes, now weeks old, seems to be focused in large part on increasing the hardships that Ukrainian civilians are facing in order to try to sap support for the government in Kyiv’s continued resistance to the Russian invasion.

It’s not hard to see how the Ukrainian military would be eager to increase their own strikes on targets inside Russia in response, both to challenge their opponent’s ability to operate with impunity within their own territory and to similarly bring the war home to its belligerent neighbor. A portion of the Russian aircraft that conducted today’s strikes on Ukraine flew from the two air bases that were said to have been struck by Ukrainian drones.

All told, it remains to be seen whether the U.S. government’s position on ATACMS for Ukraine, or on sending an alternative capability like GLSDB, may soften, or how the conflict may evolve regardless if Ukrainian forces continue to strike into Russia itself. Still, at least for the time being, American officials seem to have taken very specific steps to ensure that ATACMS won’t emerge unexpectedly as a new feature of the fighting.