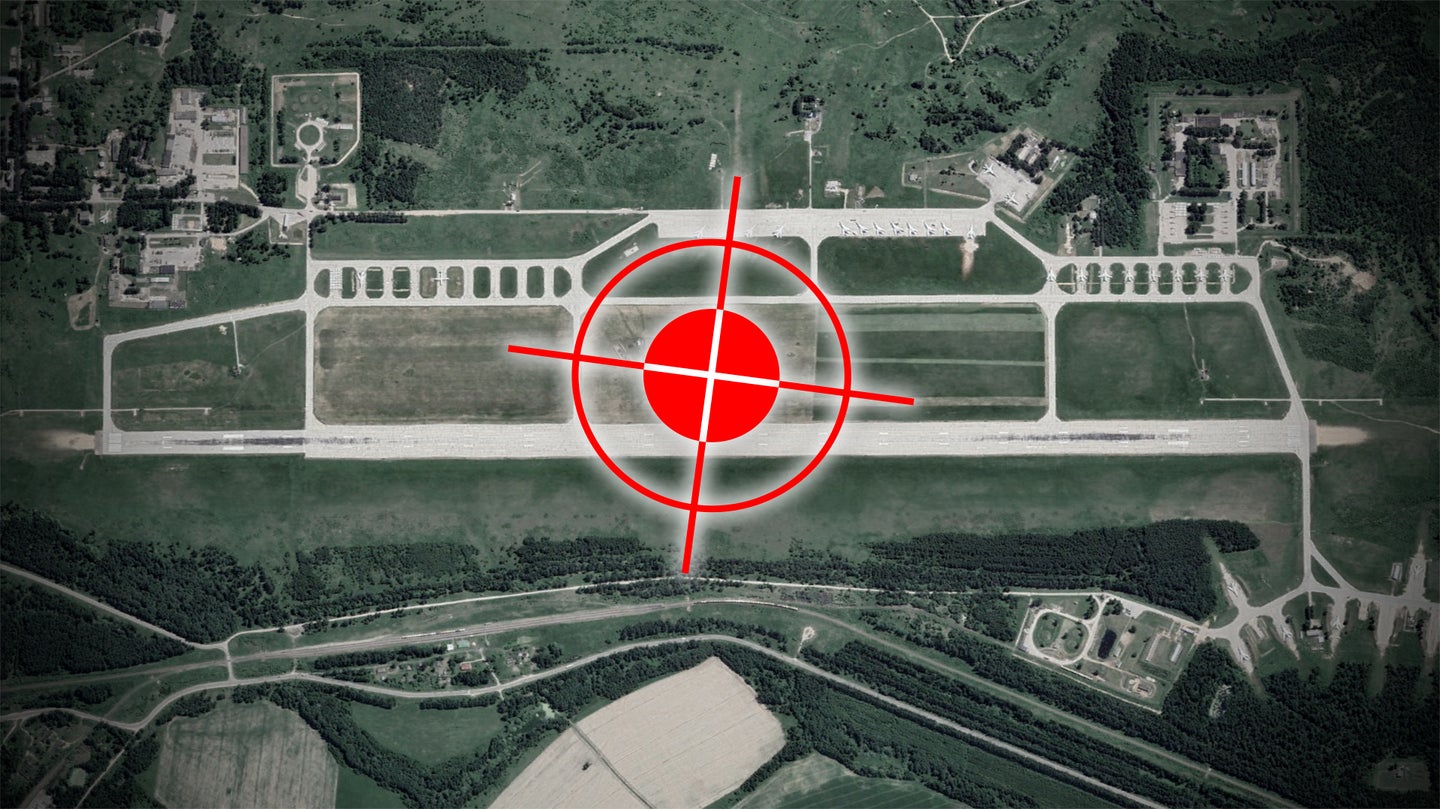 The attack took place at the Shaykovka Air Base in the Kaluga Oblast, about 140 miles north of the Ukrainian border and about 170 miles southwest of Moscow.

The base is home to Russian Tu-22M Backfire bombers from the 52nd Heavy Bomber Aviation Regiment.

“Two bombers are not recoverable,” one source tells The War Zone.

An earlier report by the Ukrainian LB.ua news outlet notes that an “explosion occurred on the territory of the Shaykovka military airfield in the Kaluga region as a result of a kamikaze drone attack.”

LB.ua cited the oblast’s governor, Vladyslav Shapsha, as saying the drone “arrived from the border” of Ukraine.

“According to Russian TG channels, the explosion occurred when the UAV was over the runway.”

But the drone attack caused no damage, Shapsha said on his Telegram channel.

“There were no casualties,” he wrote. “The airfield infrastructure and equipment were not damaged. There are no job threats. An investigative-operational group is working on the spot to establish the causes and circumstances of the incident.”

Russian media has also confirmed “an explosion took place near Kaluga,” according to the Telegram channel of Russia’s RIA news outlet.

“A drone fell, no one was injured,” RIA reported, citing Shapsha.

The Russian media outlet Readovka said the drone was shot down before it caused any damage.

“The UAV was shot down over the runway of a military unit in the Kaluga region,” Readokva reported on its Telegram channel. “It is known that the drone could not cause any serious damage, it was shot down in the air on approach.”

The Oryxspioenkop open-source intelligence account showed images on Twitter that Russian Telegram channels are using to “prove” that the drone was shot down before it could do any damage.

But the images, Oryxspioenkop reported, were actually of an “Azerbaijani TB2 drone that was shot down during the 2020 Nagorno-Karabhk War.”

The Tu-22M Backfire bombers have played a significant role in Russia’s all-out war on Ukraine.

They joined the operation on April 14, initially using just dumb bombs. The Russian Ministry of Defense announced that day that these bombers were being used to bomb the Azovstal plant in the encircled Mariupol. The bombing of Mariupol lasted for many consecutive days, until mid-May. The Tu-22M3 could cover Mariupol with salvos of freefall bombs because the town was already tightly encircled by Russian troops and the bombers did not have to worry about Ukrainian air defenses.

For targets deeper inside Ukraine, the Tu-22M3s have been attacking using heavy Kh-22 or the newer Kh-32 supersonic anti-ship missiles. On May 11, the first video taken from the cockpit of a Tu-22M3 firing the missiles emerged on social media since Russia’s all-out invasion began. You can read our original analysis on that here. These strikes have become more commonplace as Russia wore down its precision standoff cruise and ballistic land attack missile inventories, resorting to using the Tu-22’s anti-ship missiles in their secondary and less-than-high-precision land-attack mode. The strikes have included indiscriminate attacks on civilian targets. As such, it isn’t surprising why Ukraine would view this base as a top target. Previous satellite images of the base showed the missiles sitting near the bombers. If they were present during this attack in such a manner, and in a fueled state, they would be highly volatile and destructive targets in their own right.

An attack on the Shaykovka Air Base would mark a significant inflection point in this conflict, making it the furthest into Russia Ukrainian forces have attacked.

Ukraine has previously hit targets in Belgorod, just over the border. In August, we reported there was an attack on an ammo dump there. And before that, we reported on a Ukrainian helicopter raid on a refinery there in April.

Ukraine has proven it can strike deep into Russian-occupied territory as well. The only known standoff weapon in Ukrainian hands is the improvized ‘Alibaba’ (as the model that is used for conversion can be bought on the Chinese marketplace website) suicide drone which first appeared in June during an attack on a Russian oil refinery across the border in Novoshakhtinsk. The same type was used in the attack on Black Sea Fleet’s headquarters in Crimea. Days before, several Russian warplanes were destroyed in an attack on the Saki Air Base in Crimea, which you can read more about here. Other attacks have occurred as well, both in Crimea and Russia, that are likely the work, at least in part, of these still shadowy improvised suicide drones. A strike on the bomber base would be within its theoretical range. Russia has been beefing up air defenses at airbases near its borders for this very reason.

All this comes as Ukrainian troops continue to make gains in the fight against Russia, and Russian President Vladimir Putin has intimated the possibility of a tactical nuclear strike, a topic we examined deeply here.

This is a developing story. We are attempting to obtain satellite imagery of the location to help add additional information and have reached out to the Pentagon for more information. Stay with The War Zone for updates.

The post Ukrainian Kamikaze Drone Attacks Bomber Base Deep In Russia appeared first on The Drive.