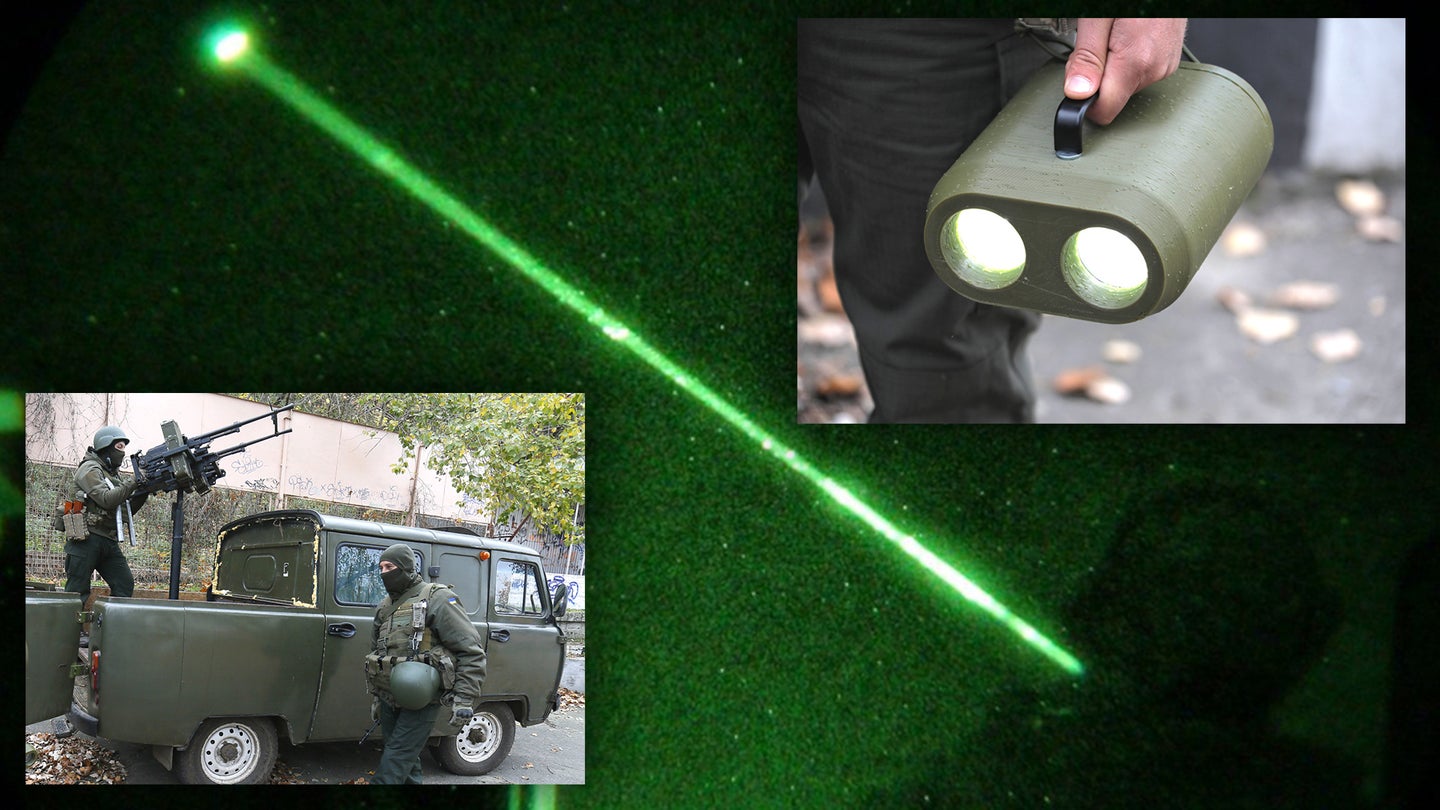 Teams of Ukrainians are hunting Russian drones, including Iranian-made kamikaze types, with the help of rifle-esque systems equipped with military-grade laser pointers, typically used to mark targets and other objects of interest on the ground for friendly pilots, as well as thermal optics. In this case, the lasers are used to direct fire from the ground, including from shoulder-fired small arms and machine guns mounted on pickup trucks and other light vehicles, even modified commercial cars and vans, at uncrewed aircraft flying overhead. In a 21s century twist on civilian air raid spotting organizations dating back to World War I, these anti-drone groups are first alerted to incoming threats by volunteers using tablet-like devices that quickly share reported sightings and related location information.

A recent story from The Washington Post, which is worth reading in its entirety, profiled the activities of some of these Ukrainian drone hunters. Various tiers of drones, including improved armed types of various sized and capabilities, have been a key feature on both sides of the conflict in Ukraine since Russia first launched its all-out invasion in February. However, Russia’s use of Iranian-made kamikaze drones, starting around September, put an entirely new spotlight on uncrewed threats and Ukrainian capabilities to defeat them. Many of these strikes appear to come at night to help improve the survivability of the relatively slow-flying drones, forcing defenders to hunt in the darkness, as well.

“One unit member normally uses a gun-like thermal sensor to spot the Shahed [a common term in Ukraine for Iranian Shahed-136 kamikaze drones], before switching on a laser beam to illuminate it so others can shoot it down,” according to the Washington Post‘s piece, which adds that multiple small anti-drone units often operate dispersed throughout the same general area. “Once a drone is illuminated, the barrages that follow can be so intense it is often hard to know which unit destroyed a drone.”

The story does not specify what type or types of lasers have been in use in this role in Ukraine. However, a picture included in the story – seen in the Tweet above – does show one of the ‘guns’ with a laser system that looks like many military-grade laser pointer/illuminators with visible and infrared modes like the B.E. Meyers IZLID 1000P, also known by the U.S. military designation AN/PEQ-18. These devices can have considerable range, with the IZLID 1000P being able to project an infared laser spot on an object nearly 27 miles (43 kilometers) away and illuminate targets at a range of just over 4 miles (7 kilometers) when set to project the beam in a wide “flood” mode, according to the manufactuer’s website.

Typically, these kinds of lasers are used in the infrared mode to discreetly mark targets on the ground, especially for friendly aircraft, or otherwise signal to friendly forces, as can be seen in the videos below.

Military-grade laser pointer/illuminators can be similarly employed when set to project a visible beam, but doing so would alert potential opponents. As such, the visible mode on these systems can also be used for signaling to or warning potential hostile actors, especially in situations outside of active combat. In fact, B.E. Meyers, among others, offers a laser system specifically designed for use as a non-lethal system for use in riot control and force protection-type roles to deter or to try to repel potentially threatening individuals, including by temporarily blinding them as you can read more about here.

In Ukraine, the drone hunters are pointing these lasers up to mark targets for gunners on the ground. While Iranian kamikaze drones don’t rely on cameras, the beams could also potentially be used blind or even possibly burn out any optics on other uncrewed aircraft flying overhead.

Other forms of illumination are being employed alongside these lasers. Drone-hunting units have been spotted with hand-held flood lights, giving them something of an old-school searchlight capability. The Washington Post article mentions “a pig farmer who uses his grandfather’s World War II flare gun” being a member of one of the teams.

When it comes to actually shooting the drones down, small arms of various kinds appear to be the weapons of choice. This includes various kinds of light vehicles, even commercial types, with improvised machine gun mounts. This kind of combination, examples of which have been seen on multiple occasions supporting general Ukrainian operations on the ground, that offers a more stable firing platform and valuable mobility.

“Tsybin’s team, for instance, was armed with a .50-caliber machine gun salvaged from a destroyed Russian tank,” according to The Washington Post. “The gun was now perched in the back of a donated convertible, complete with a custom paint job showing a skull.”

Sadly there does not appear to be a picture available of this vehicle.

Last month, a drone hunting unit in the southern Mykolaiv region, which is where The Post‘s story was focused, did show off a modified Soviet-designed UAZ-452-series minivan with a locally produced machine gun mount with two 7.62x54mm PKT machine guns. The PKT is a variant of the Soviet PK family of machine guns that was designed for use internally in tanks and other armored vehicles, and these weapons may well have also been recovered from the battlefield.

UAZ-452 types are common in Ukraine, as well as in Russia and other countries that had been part of the Soviet Union or in its sphere of influence. The vans are more often referred to by the nickname ‘bukhanka,’ meaning ‘bread loaf.’

Perhaps the most interesting part of the kill chain is the use of broader networks of volunteers who have been provided with or otherwise acquired tablet-like devices and then use them to alert drone hunting units to potential incoming threats via the Telegram online messaging service. The Tweet below talks about the recent distribution of tablets, an example of which is shown in on the attached pictures, to volunteers so they can help protect Ukraine’s skies.

This in many ways mirrors networks of volunteer spotters that British authorities used to warn of incoming air raids first during World War I. During World War II, a number of other countries, including the United States, established their own volunteer spotting organizations to help provide an additional source of early warning about incoming enemy aircraft.

“The drone hunters are especially wary of where a damaged drone might fall. In Kyiv, some Shaheds were shot down but then landed on apartment buildings, killing civilians,” The Washington Post noted in its story. “After a drone is destroyed, the units hunt down the pieces for public safety and intelligence reasons.”

It’s been clear for some time that Ukrainian forces have been actively seeking to recover the remains of downed drones for intelligence exploitation purposes, but this provides more insight into the exact process. Overall, Russia’s war on Ukraine has already long appeared to be a goldmine for Ukrainian intelligence services, as well as their international partners, such as the United States, when it comes to capturing higher-end Russian equipment, as The War Zone regularly reports on. With the introduction of Iranian-made drones, it has also offered new opportunities for governmental and non-government entities to inspect those designs, investigations that have now repeatedly highlighted their heavy use of foreign-made electronic components.

In terms of the actual drone-hunting effort, laser ‘guns’ notwithstanding, the entire arrangement does seem largely ad hoc and relatively low-tech. There are indications that some drone-hunting elements may have more robust air defense capabilities at their disposal, such as various types of shoulder-fired surface-to-air missiles, also known as man-portable air defense systems (MANPADS), or vehicle-mounted versions thereof.

Still, this seems to be more the exception than the rule. “The drone hunters said they also need more basic equipment, including thermal sensors, night vision goggles, and sturdy pickup trucks,” The Washington Post reported.

On November 23, the U.S. military announced that a new military aid package for Ukraine would include “150 heavy machine guns with thermal imagery sights to counter Unmanned Aerial Systems,” but did not specify what kinds of machine guns these might be or what type of thermal optics they would be fitted with. It’s unclear when those weapons might be expected to make their way to the battlefield.

Ukraine’s ad hoc drone hunters, though obviously a far cry from an integrated air defense system, do offer some advantages in terms of cost-effectiveness. As The War Zone highlights routinely, using more traditional air defense assets, especially often expensive surface-to-air missile systems, to knock down relatively cheap lower-end drones is a cost equation that generally does not favor the defender.

So, though clearly borne out of necessity, Ukraine’s mobile teams do offer authorities in the country a way to tackle this threat that doesn’t suck up other air defense resources that are currently in very high demand for engaging Russian missile barrages. Of course, none of this is to say that these units wouldn’t still benefit from more capable weapons, sensors, and other gear.

“In terms of effectiveness, while the drones obviously created a new dimension and gave the Russians additional capability we don’t think they’ve been terribly effective,” an unnamed Western official reportedly recently told The National newspaper. “The Ukrainians have been quite creative about how they’ve organized themselves to defeat them.”

Ukraine’s drone-hunting teams may be getting something of a breather at the moment, too. There are growing reports that Russia may have expended a significant portion of the initial batch of Shahed-131 and 136 kamikaze drones that it received from Iran. The drones have also reportedly suffered issues when operating in cold weather in Ukraine, where it is now firmly winter. Still, just yesterday, there were reports of new strikes involving ‘Shaheds.’

At the same time, Russia is reportedly seeking to acquire additional drones from Iran and there have been reports about Iranian authorities helping the Russians establish some kind of local production capacity for certain types. This is in addition to fears that Moscow and Tehran are working on a deal that could see Russia’s military get hundreds of Iranian short-range ballistic missiles for which Ukrainian forces have, at best, extremely limited tools to defend against.

Regardless, the threat posed by other lower-end uncrewed systems, including commercial types modified to carry improvised munitions, which are still being actively employed on both sides of the current conflict in Ukraine, isn’t going away. Ukrainian drone hunters could potentially employ the tactics they’ve developed already to spot and engage other types of drones.

Altogether, while Russia’s stocks of usable Iranian drones may be low at the moment, they’re clearly still a potential threat and it’s unlikely we’ve heard the last of Ukraine’s volunteer anti-drone teams and their lasers, or the network of spotters who have been alerting them to incoming threats.