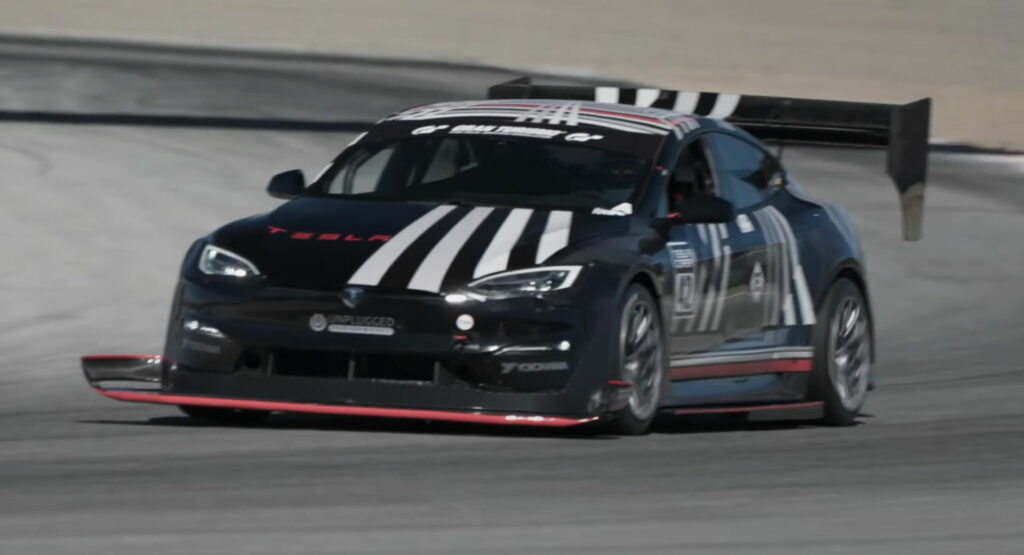 The potent Tesla Model S Plaid race car from Unplugged Performance is heading to this year’s Pikes Peak International Hill Climb and will likely prove to be one of the quickest EVs at the event.

Unplugged Performance debuted its modified Model S Plaid at last year’s hill climb but given that deliveries of the Plaid only started a couple of weeks before the event, it didn’t have long to modify and test it. Fast forward 12 months and a number of significant upgrades have been made to the car. Like last year, it will be driven by Randy Pobst.

The potent EV recently took part in the Hypercar Invitational event at WeatherTech Raceway Laguna Seca and did so with a host of upgraded aerodynamic components to increase downforce.

A key upgrade made to the car is the fitment of a much larger front splitter that does without the exposed struts of last year’s car. Unplugged Performance has also flared the front and rear wheel arches and affixed some pronounced side skirts. The modifications continue at the rear.

The most obvious change is the fitment of an even larger rear wing. This wing doesn’t just sit as high as the Tesla’s roofline but it also features huge endplates to aid in aerodynamics. The Tesla tuner has also equipped the EV with a distinctive rear diffuser. Various other changes from last year’s car have carried through to 2022, including the high-performance suspension package, carbon ceramic front brakes, and forged wheels.

Last year’s Pikes Peak International Hill Climb was shortened as the top section was covered by ice and snow. The Model S Plaid from Unplugged Performance finished in 6:57.220, enough to place it 10th overall. The upgrades made to the 2022 car shouldn’t just make it quicker at Pikes Peak but the tuner says it plans to return to Laguna Seca to set a new EV lap record in the car.