Up To 50 M1 Abrams Tanks Could Be Headed To Ukraine: Reports 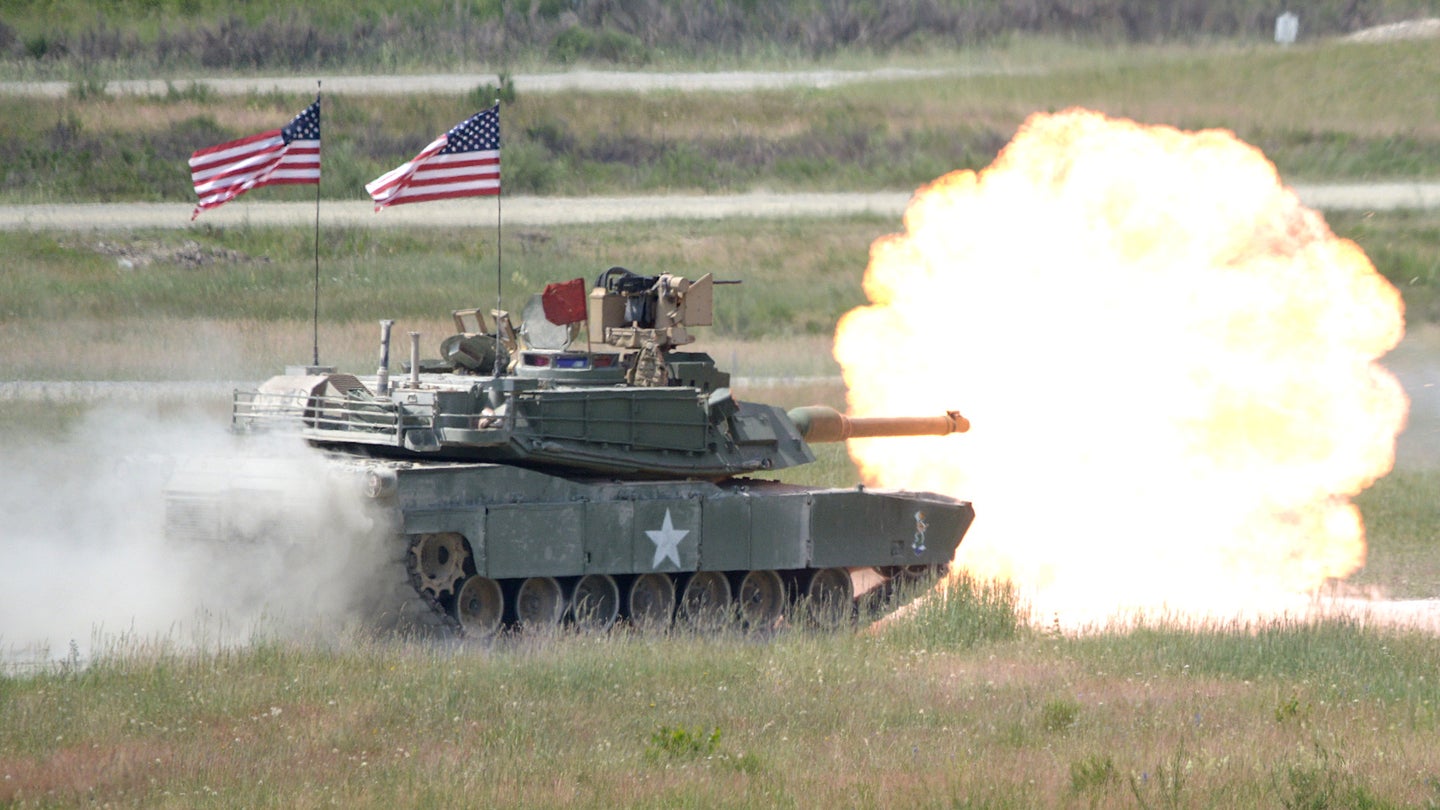 The U.S. government is getting closer and closer to sending dozens of M1 Abrams tanks to the Ukrainian armed forces, according to a growing number of reports. This comes as authorities in Poland have now formally requested approval from their counterparts in Germany to re-export Leopard 2 tanks to Ukraine. Officials in Germany have reportedly said that they would only sign off on such a deal if the Americans green-lit a transfer of Abrams.

A story from Politico says that President Joe Biden’s administration is considering a new military aid package for Ukraine that could include between 30 and 50 M1 tanks. This follows earlier reports today from The Wall Street Journal and others that U.S. officials have been edging toward a decision on transferring M1 Abrams and that a formal announcement about a future transfer could come this week.

What specific M1 Abrams variants or subvariants might be under consideration for Ukraine is unclear. Based on other American military aid for Ukraine to date, they are likely to be older M1A1 or M1A2 models. These tanks all have 120mm main guns, but differ in the specific configurations of their armor, sensors, communications systems, and other equipment. The U.S. Army has thousands of earlier generation M1 tanks in storage. The U.S. Marine Corps has been divesting all of its Abrams tanks as part of a restructuring of its forces.

American officials have consistently raised concerns about the Abrams being too complex and fuel-hungry, even compared to other more modern Western tanks, to provide a useful capability for Ukrainian forces in the near term. The latter is due to M1’s gas turbine propulsion system. Certain aspects of the Abrams are also very sensitive and certain features are not included in variants exported to allies and partners.

“The [Abrams] announcement would be part of a broader diplomatic understanding with Germany in which Berlin would agree to send a smaller number of its own Leopard 2 tanks and would also approve the delivery of more of the German-made tanks by Poland and other nations,” according to The Wall Street Journal‘s story.

The exact status of these deliberations remains unclear. The War Zone has reached out to both the Pentagon and the National Security Council for more information.

However, Germany’s Der Spiegel has separately reported that authorities in Berlin have decided to send their own tranche of Leopard 2 tanks to the Ukrainian armed forces. This could include at least one company’s worth of Leopard 2A6 variants, according to that story. The current organization of a German tank company is not immediately clear, but typical company-sized Western tank units have around 14 tanks in total.

If true, this would major reversal of German policy to date. German Chancellor Olaf Scholz and other German officials have resisted calls for months to transfer any of the country’s own tanks over concerns that doing so could escalate tensions with Moscow and provoke retaliation on various levels, even outside of Ukraine.

Pressure, including from the United States, the United Kingdom, France, and Poland, has been building on the German government to change its position. The British government already announced its intention to deliver 14 Challenger 2 tanks, among other armored vehicles, to Ukraine earlier this month. French authorities say that there is a possibility of sending some of their Leclerc tanks, too.

Germany’s Defense Minister Boris Pistorius did reportedly say at the most recent meeting of the U.S.-led Ukraine Defense Contact Group, which took place at Ramstein Air Base in Germany last week, that he had ordered an official inventory be taken of Leopard 2s in his country. It was and still is somewhat curious that this information is apparently not already on hand, especially given that German defense contractor Rheinmetall continues to speak publicly about how many of these tanks it has in its warehouses that could be delivered to Ukrainian forces.

Germany is also now reportedly set to sign off on third-party transfers for Leopard 2 tanks, according to Der Spiegel and other outlets. Poland announced today that it had officially requested such approval. At least a dozen countries, including Poland, have reportedly said they are ready and willing to send a total of around 100 Leopard 2s to the Ukrainian armed forces if Germany would allow it.

When it comes to the 120mm gun-armed Leopard 2s, the pool available for transfer to Ukraine is dominated by A4 variants and subvariants.

Among other things, Leopard 2A4s feature older-style armor packages. Compared to the A4, the Leopard 2A6s that Germany is reportedly considering handing over to Ukraine have additional armor protection on the turret and the hull, elements of which had been first introduced on the interceding A5 version. They also have an improved main gun with a longer barrel and various suspension and drivetrain upgrades.

Questions do remain about how soon Ukrainian forces might actually receive Abrams or Leopard 2s. Any tanks in storage will likely need at least some degree of refurbishment before they can be transferred.

Rheinmetall has previously said that it could take at least six weeks to get Leopard 2s from its stocks to Ukraine. Recent Spanish media reports say that country could have Leopard 2s ready to go within a month. This is despite official statements from the government in Madrid last year that the examples it had available to send were “in an absolutely deplorable state.”

There is also the matter of training Ukrainian forces to operate and maintain the tanks. Ukrainian troops are already due to begin training on Leopard 2s in Poland, despite a lack of a formal agreement, Oleksii Reznikov, Ukraine’s Defense Minister, had said last week.

This is all very important to consider given that there are growing fears that Ukrainian forces could be facing one or more major Russian offensives in a matter of months, if not weeks. There has already been a surge of newly announced aid for Ukraine from the country’s various international partners in the past few weeks in light of these concerns. The recent assistance packages have included other heavier armored vehicles, including dozens of Bradley and Stryker vehicles now set to head to Ukraine from the United States.

Additional concerns remain about the ability of Ukraine’s military to sustain more modern tanks and other heavier armored vehicles of Western design in the longer term.

“The M1 one is a complex weapon system that is challenging to maintain, as we’ve talked about,” U.S. Air Force Brig. Gen. Patrick Ryder, the Pentagon’s top spokesperson, said at a press conference today. “That was true yesterday. It’s true today it will be true in the future.”

There is also the matter of the optics of Russia destroying and/or capturing any of these vehicles in future fighting. The potential for capture, in particular, could raise operational security concerns, depending on exactly how the vehicles that Ukraine receives might be configured.

“The capabilities that we have provided to Ukraine and the capabilities that we will provide to Ukraine in the future, are not about optics,” Pentagon Press Secretary Ryder said at today’s press conference in response to a question from The War Zone‘s own Howard Altman. “They’re about combat capability, and enabling them to have the best chance possible to be successful on the battlefield.”

All this being said, even if Ukrainian troops cannot take advantage of their full range of capabilities for various reasons, more modern Western tanks respect a significant all-around improvement over the Soviet-era designs and derivatives they have in service now. Though not automatically game-changing, even a small number of Abrams, Leopard 2s, Challengers, and other types could be a boon to Ukrainian forces in future offensive and defensive operations.

More advanced combined arms and maneuver warfare training for any Ukrainian units to be equipped with these tanks, and for forces expected to work with them, could be critical. Western tanks are not a ‘silver bullet’ and complex tactics would help improve their chances of surviving on the battlefield and of Ukraine’s military getting the most out of them.

If nothing else, a decision by the United States, Germany, and others to fully open the floodgates to sending Western tanks is a new and very strong statement of continued commitment to aid Ukraine’s military in its fight against invading Russian forces.

The post Up To 50 M1 Abrams Tanks Could Be Headed To Ukraine: Reports appeared first on The Drive.