VinFast Wants You To Subscribe to Your Own Car’s Battery. Here’s What To Know 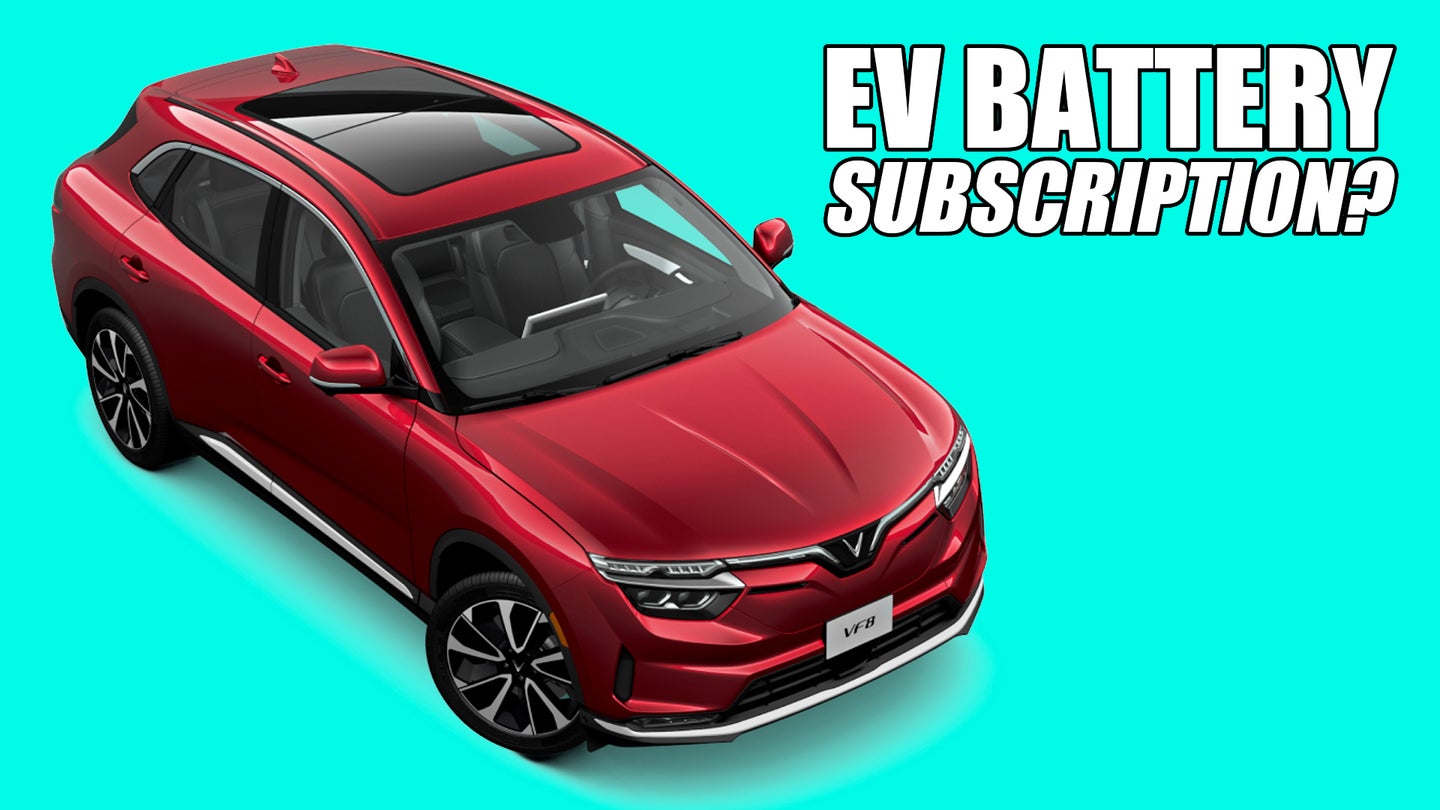 The software-as-a-service subscription-everything business model has unfortunately made its way into the car world. We here at The Drive don’t particularly care for that, and we’ve continually chided brands for their whack subscription pricing. But VinFast, the new Vietnamese automaker with aggressive aspirations on the U.S. market, is planning to have subscription-style pricing as a cornerstone of its business. When VinFast sells you an electric car, it will lease you the battery. How exactly that will work is frustratingly shrouded in mystery, but I’ve dug up as much detail as I could to help you make sense of it.

The VF8 and VF9 are VinFast’s two forthcoming electric crossovers. The two-row VF8 is about the same size as the Volkswagen ID.4, give or take. The VF9 is about the same size as a Hyundai Palisade and has three rows of seating. The VF8 can go a minimum of 248 miles from its standard-range pack or 292 miles on its enhanced-range battery in Eco trim. The VF9 will touch 369 miles in Eco trim with an enhanced-range battery pack. These are both manufacturer estimates, no EPA testing or range certification has been released yet.

On paper, the VF8 and VF9 are very cost competitive. The VF8’s $40,800 base price, sans a to-be-determined destination fee, undercuts the ID.4 Pro while offering more power and more range. But, unlike the ID.4, the VF8’s base price doesn’t include its battery. Like an old-school R/C car, batteries are sold separately, even if they come installed from the factory. This is where the pricing gets a little murky.

I pressed three different VinFast contacts for details, including a salesman in the San Mateo VinFast store, a customer service rep from the VinFast hotline, and a VinFast PR representative. There are no origination fees for the lease itself. There are no price differences between leasing the smaller battery and the larger battery, either. VinFast says when the battery drops below 70%, it will replace the battery with a new one. That’s all fine and cool, but the battery payments never end. If you purchase a VinFast EV, you are locked into a forever lease, paying on the battery in perpetuity, at least until you sell the vehicle to the next owner. VinFast calls it a “permanent subscription fee for the product’s lifetime.” VinFast is not offering a battery purchase option, insisting that the lease could save the heartache of “replacing a 15 or 20 thousand dollar battery.”  Whether or not that number is the actual cost of a VinFast EV battery, isn’t clear.

VinFast’s careful wording on its site also tells us that contract pricing isn’t necessarily fixed, either. “For VinFirst Pioneers who purchase a VF 8 or VF 9 in 2022 or 2023, customers will enjoy permanent subscription rates for the entire life of their vehicle,” the website states while implying that the subscription rate isn’t immutable. I asked the VinFast salesman if there is a possibility the battery lease payment amount could change in the future, and the salesman said no, citing the lock-in price for first owners. Yet, it gets complicated for second, third, and beyond owners.

I asked if the pricing could change when the contract renews or changes hands, and neither point of contact gave me a concrete answer. Whoever buys a used VinFast will be paying a lease, no matter what. Ten years from now, when VinFast vehicles inevitably make their way to low-cost used car lots, will a cheap dealer or cash-strapped buyer be willing to pay for a purchase price and a monthly subscription? Hell, will new EV buyers be willing to be on the financial hook for a key portion of the vehicle’s functionality, for as long as they own the vehicle?

At $40,800, the VinFast VF8 could be a dark horse alternative to electric crossovers from established manufacturers. But, it’s not really $40,800. In the era of 72-month loans, a VinFast VF8’s battery would add an extra $7,920 to its base price throughout the same period of time. That is, if the $110 lease price doesn’t change. Except, at the end of the loan, you’re still paying for a part of the car that’s necessary for the vehicle to function, and it appears you can’t ever own it for some reason. ADAS is a subscription, too. VinFast is giving first buyers one year of free ADAS, but from there onward, it will be a subscription. Pricing hasn’t been announced yet, but VinFast expects to tell us soon.

From my perspective, VinFast’s business model doesn’t seem all that different from rent-to-own furniture places like Rent-A-Center or Aaron’s. Those attractively low per-week prices add up, with terms that have buyers wildly overpaying for a not-so-good-quality item. Are VinFast’s offerings worth the not-as-low real-world price? Maybe not.

There are rumblings that VinFast might offer a battery buyout option, possibly in 2024, but pricing, timeline, and the logistics of such a deal aren’t known. VinFast hasn’t even ironed out the terms of its current battery leasing structure. I asked what would happen if a battery lessee doesn’t make payments, and VinFast doesn’t seem to know yet.

“VinFast will work with banking partners to include the default terms of our vehicle financing/leasing and battery subscription agreements/contracts so that all parties are aware of the measures which may have to be taken in the event the battery subscription fees are not paid,” a VinFast representative said. A different representative, one I spoke to via the VinFast customer service hotline, said the car would be limited to the “minimum mileage.” I asked what the “minimum mileage” threshold is, and she said she didn’t know.

Can you default on a battery, even if the car’s paid in full? It looks very possible, unfortunately. In the EV startup world, the high flash, big promises, yet vague implication, doesn’t seem all that uncommon for manufacturers who don’t have much to show from a sleek computer rendering or body-in-white prototype that barely moves under its own power. VinFast, however, has stores open, is taking reservation money, and making promises to deliver cars as soon as this November. Yet, no one seems to know what the buying and ownership process will look like.

If VinFast expects Americans to fork over $40,800 and possibly hundreds of extra dollars per month, it needs to get serious about defining the terms of its battery lease. From what we can tell right now, VinFast seems to be the epitome of the car-via-microtransaction that’s making inroads into the industry. Where is the line?

We’re very curious to see how VinFast ends up making its way through the U.S. market. It’s already got six stores open in California, plans for 27 more, and even commitments to build a factory in North Carolina. Creativity in sales models and pricing isn’t necessarily a bad thing, but coming out of the gate with such an opaque cost structure that looks like an indefinite lease is worth holding some skepticism about.

The post VinFast Wants You To Subscribe to Your Own Car’s Battery. Here’s What To Know appeared first on The Drive.