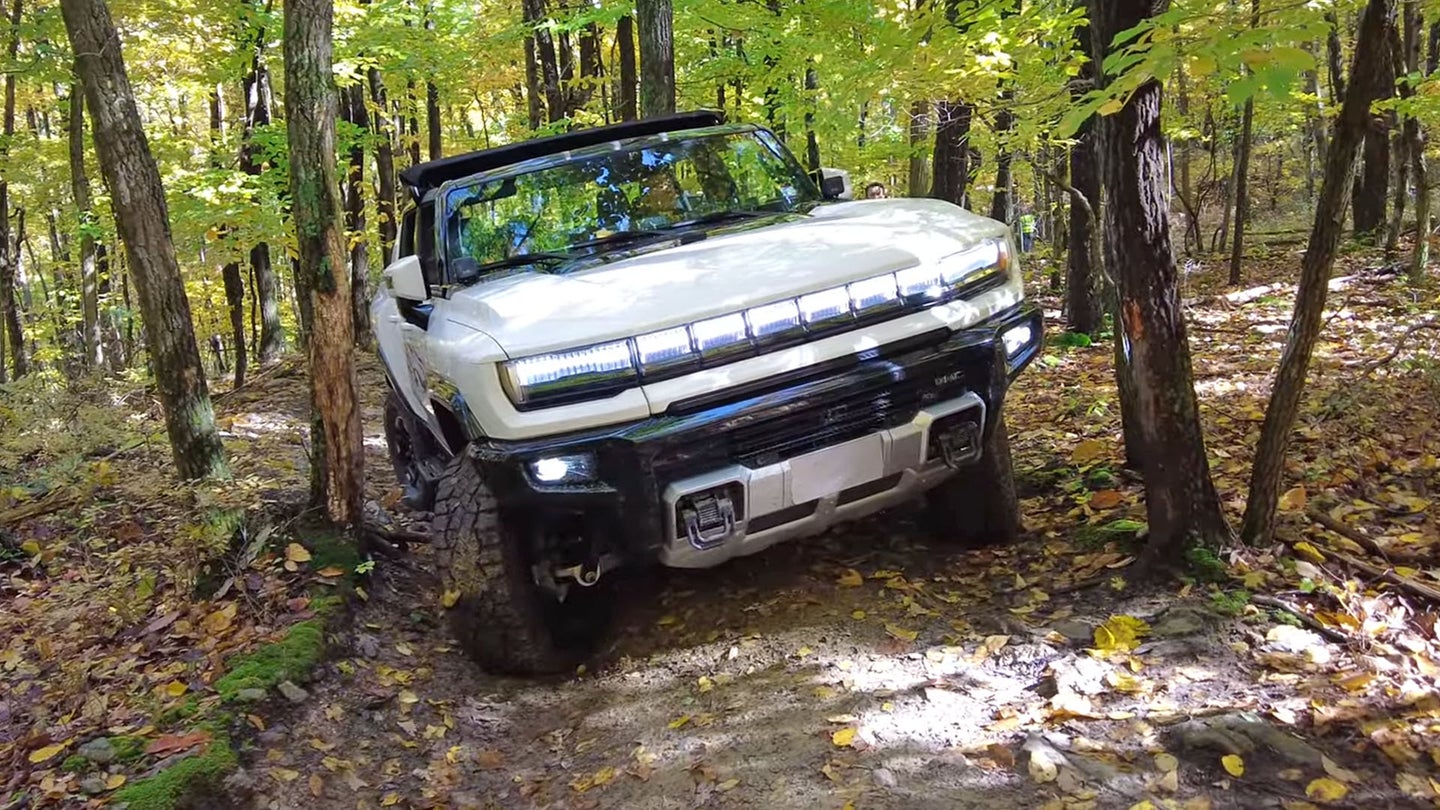 Say what you will about the GMC Hummer EV’s unparalleled curb weight, or its extreme inefficiency for an electric vehicle, but it’s still pretty neat. It has a host of bells and whistles to enable carefree cruising whenever the asphalt ends, which is what you want in a six-figure supertruck. How does it stack up against an old H1, though? The original Hummers made by AM General are supremely capable off-roaders, so it’s a closer fight than you’d think.

The Drive reader Acer Miller is a member of a local Hummer club, and for the first time, a group member brought a Hummer EV to the woods to see how it would do. At the Anthracite Outdoor Adventure Area in Pennsylvania, the new electric truck showed off its party tricks that actually do help it in tricky situations. The scope of Miller’s observations is limited to tight forested areas, but one of the key features of the Hummer EV really comes in handy here.

You might expect the two rigs to perform mostly the same on tight trails since the H1 measures 86.5 inches wide and the EV comes in at 86.7 inches. This isn’t the case, though. First of all, the Hummer EV’s narrower practical width allows it to crawl through areas that the H1 can’t. Even though it’s just as girthy as its military-grade sibling, its body narrows in the middle between the wheel arches, something that doesn’t happen on the slab-sided H1. This helps it take better advantage of its four-wheel steering.

That steering is really the game-changer. Whereas the older machine might need a 50-point turn to get through a tight area, the EV can slither around obstacles in one single pass. It can also phase side-to-side thanks to its CrabWalk feature—something unmodified H1s can’t dream of.

Controlling acceleration actually seems easier in the new Hummer as well. Whereas the diesel-powered truck strains against its torque converter unpredictably, the EV can inch forward with ease, its drivetrain delivering power exactly where it’s needed with a relatively simple mechanical four-wheel drive system. Sure, things could get harry in an instant if you floored it, but it’s surprisingly good through the low-speed stuff.

Ultimately, the answer for tight forest roads is a smaller vehicle, as the later H2s and H3s show. Still, it’s interesting to see the Hummer EV’s army of off-road features actually being put to work.

The post Watch a GMC Hummer EV Go Head to Head With a Classic H1 on Tight Trails appeared first on The Drive.