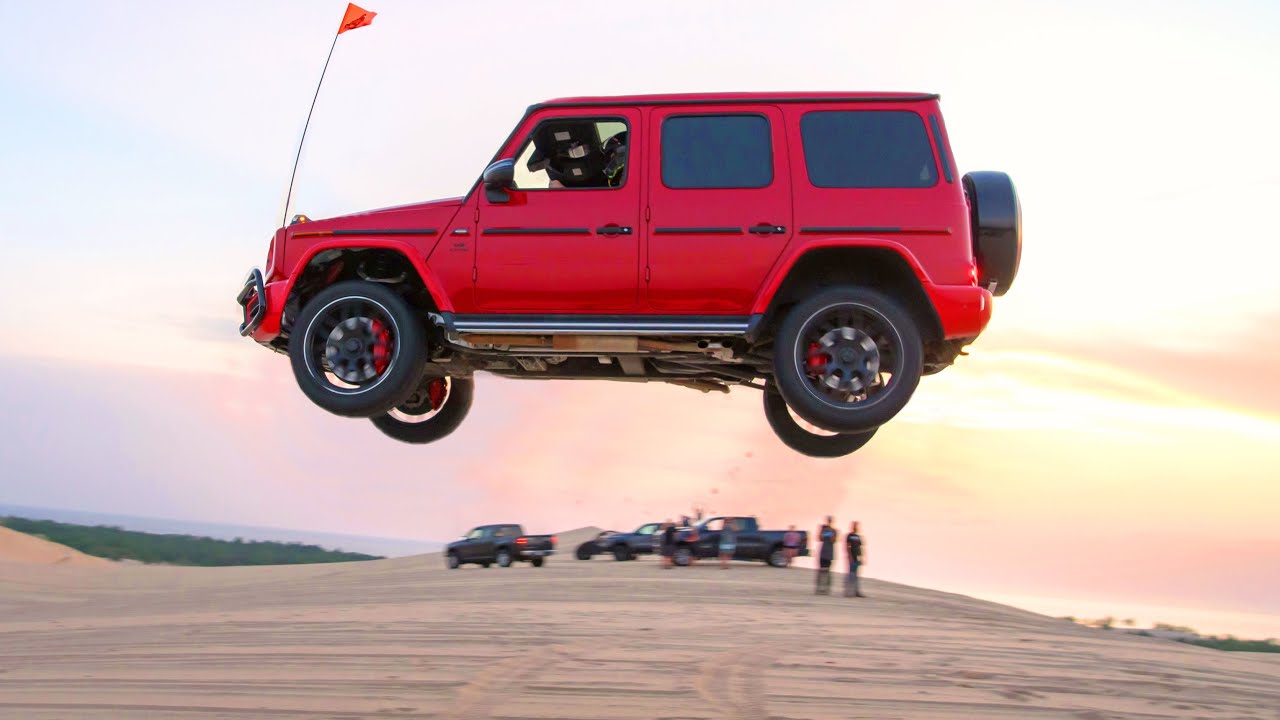 Whether it was actually part of a “durability test” or not, watching a Mercedes G-Wagen fly nearly 100 feet over a sand dune is certainly an impressive sight. The SUV, driven by Youtuber WhistlinDiesel, was filmed achieving this stunt in a video posted Aug 3. Is it durable enough? Well, Let’s say kinda.

The vehicle, which is modified to a considerable degree, completed the jump while only losing what looks like an inner fender liner. It was also abused pretty seriously before this stunt was attempted, driven straight off a trailer from a considerable height without a ramp, for instance. It was also driven hard enough through the dunes for the car to think it had been in an accident.

This G-Wagen in particular is allegedly packing 1,000 horsepower thanks to new turbochargers, injectors, and other modifications. It’s also lifted 3 inches and has oversized tires. These mods made its 91-foot jump a little more feasible, although G-Wagens are pretty stout from the factory. It’s possible a stock version of the truck would at least land in one piece. No comment on whether it would drive away.

WhistlinDiesel, the driver of the vehicle, is known for all sorts of similar antics. He buys expensive things to destroy them. His most amusing stunt was driving an eight-wheeled Chevy Silverado into a Florida bay. Due to the buoyancy of the air in the tires, it floated, which confused bystanders and local police alike. He’s also fitted 20-foot-tall wooden wheels to a GMC pickup truck, which didn’t really work but were at least destroyed in an amusing way.

The Youtuber mentioned he paid a considerable sum for the vehicle. That’s because Mercedes was not making them for quite some time. Now that there’s a trickle of supply, prices are out of this world. Although saying the Hoosier has more money than brains doesn’t necessarily mean much, WhistlinDiesel doesn’t seem to be short on funds. The result is, well, plenty more videos like this on his channel, and definitely more to come featuring this truck.

The post Watch a Mercedes G-Wagen Survive a Wild 91-Foot Jump appeared first on The Drive.