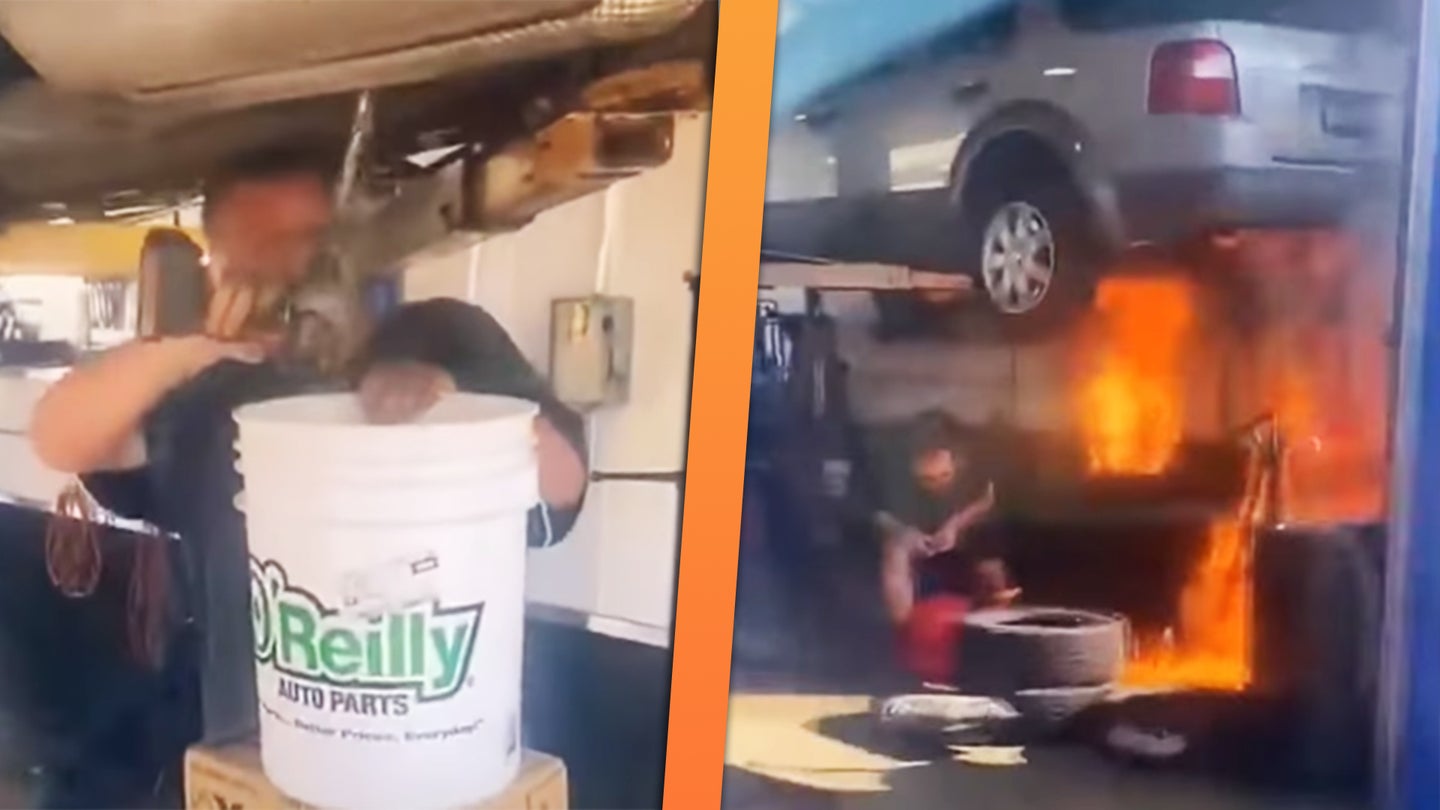 As someone who does fairly serious wrenching on a regular basis, I’ve learned some rules of the trade. Honestly, most of them are common sense stuff like always using jack stands when lifting a vehicle, tightening your lug nuts, and being extremely careful with anything involving gasoline. This viral video shows a professional technician drilling into a gas tank and causing an alarming fire.

The setup is something out of a Jackass skit. A fourth-generation Ford Explorer is on a lift at what looks like a basic service and lube shop. Beneath the car is the technician using a cordless drill to puncture the gas tank, with an O’Reilly’s auto parts bucket perched on a two cardboard boxes and some kind of plastic stand beneath the car to capture the fuel. The capture system on its own is incredibly dangerous. A large bucket of gasoline on an unstable perch could spill easily and ignite. Unfortunately, the tech didn’t get that far.

It’s unclear if the person recording the video is also a tech at the shop, but he says something concerning at the very beginning of the clip. “Day 2 of drilling into a gas tank.” This implies that its been done before, or its a joke about how long it took to fully penetrate the tank. It only takes another second or two of video for the worst possible thing to happen. The tech breaks through the tank, and gasoline starts spilling. In another instant, everything is engulfed in flames.

My best guess at the ignition source is the cordless drill. Modern gas tanks are generally a plastic composite and wouldn’t cause sparks on its own. Static electricity can be a source, but if you look closely at a power drill under operation, it generates its own sparks in the electric motor, usually visible when the drill comes to a sudden stop. Once the fuel flowed out, the tech abruptly stopped the drill, causing sparks that could have ignited the tank of fuel.

And it looks like the tank had a reasonable amount of fuel in it. As the fuel flowed out, it continued igniting, causing a massive fire. The tech tried to put it out by moving the bucket and using a fire extinguisher to no avail. The final shot in the video is of the shop in flames.

This shouldn’t be a lesson to anyone. Just don’t do this.

The post Watch a Tech Drill Into a Full Gas Tank and Start a Massive Fire appeared first on The Drive.