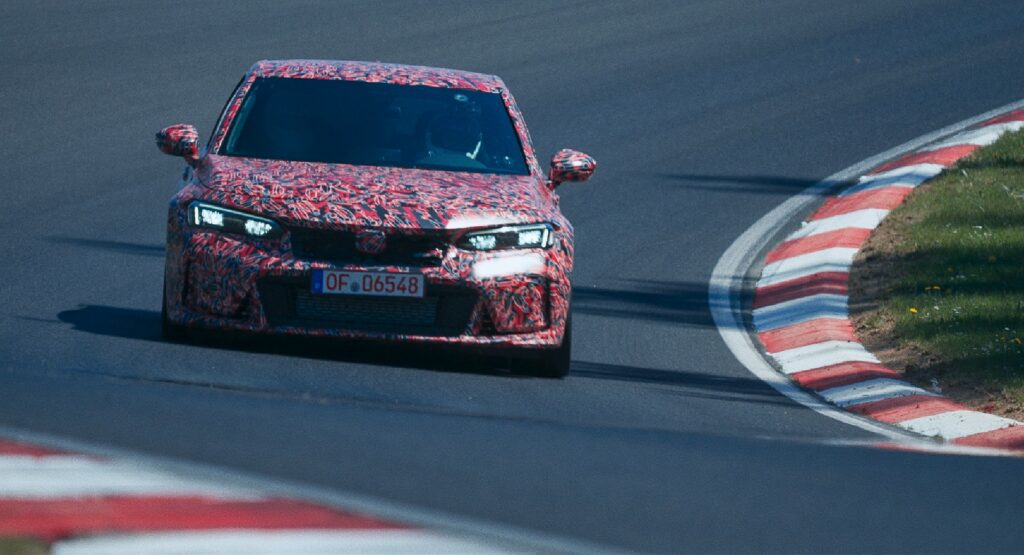 Honda has published a teaser video of a camouflaged Civic Type R prototype doing hot laps at the Nürburgring ahead of its summer debut, hinting at a new record on the famous track. Mind you, the 2023 Civic Type R has already broken the FWD lap record at Suzuka, proving that the new generation is comfortably faster than the outgoing model.

The footage was filmed in May 2022, when our spy photographers had caught the model testing at the Green Hell. This was not the first time the  Civic Type R visited the Ring, as a large part of its development took place on the Nordschleife. The performance flagship of the Civic range is still wearing the red-themed camouflage, hiding the aggressive bodykit that distinguishes it from the lesser models alongside the large wing and the triple exhaust pipes.

Honda hasn’t given us details on the powertrain of the Civic Type R but we know it will be the last non-electrified ICE-powered model it will sell in Europe. Under the bonnet we expect a more powerful version of the turbocharged 2.0-liter VTEC four-cylinder, producing more than its predecessor’s 306 hp (228 kW / 310 PS) and 295 lb-ft (400 Nm) of torque. Power will be sent to the front wheels through a six-speed manual gearbox which is a rarity these days, even in the hot hatch world.