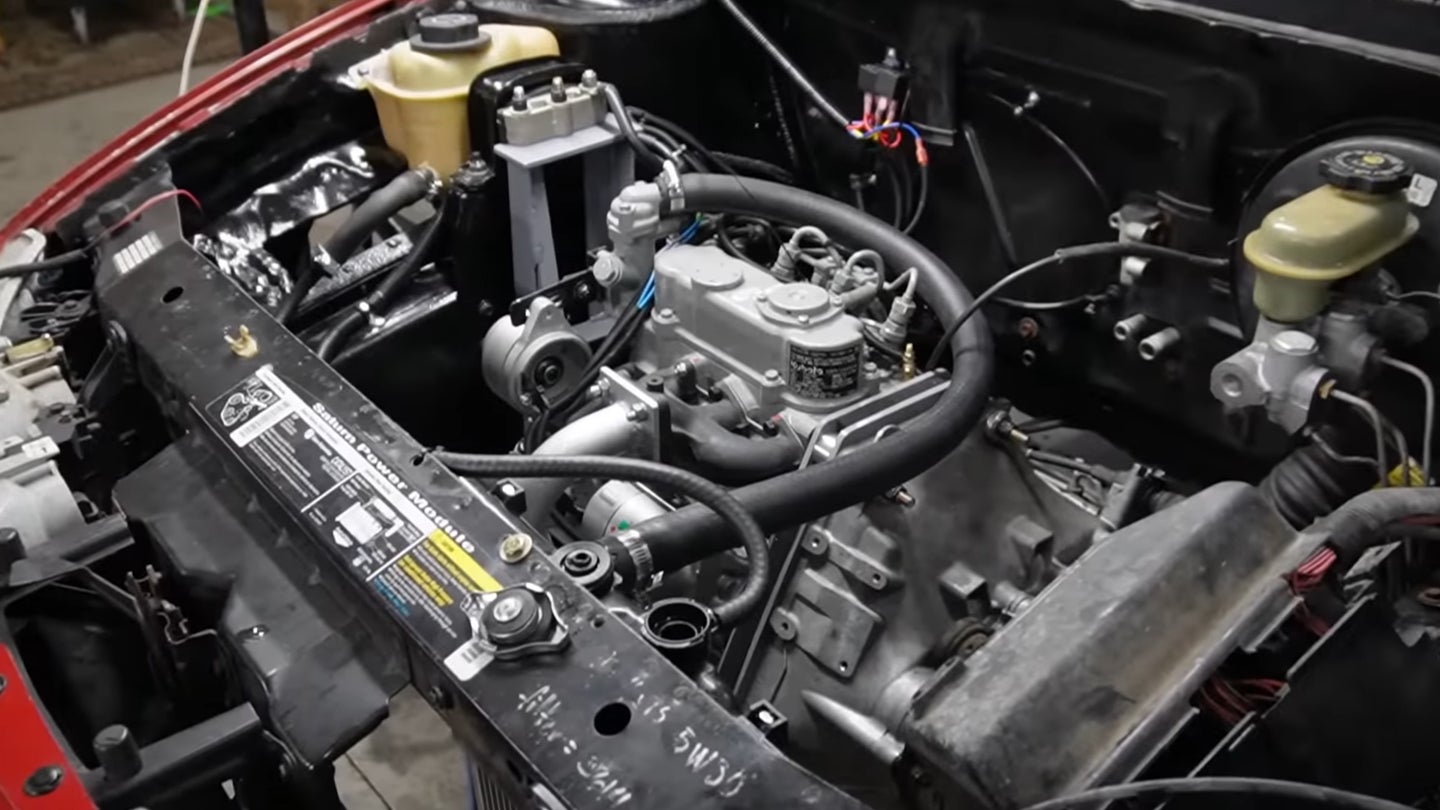 Have you ever looked at a car and thought about how cool it would be with some other kind of engine under the hood? Whether it be GM’s venerable LS1, Honda’s K-Series, or myriad other enthusiast-preferred platforms, sometimes a car could be so much more interesting with a weird motor powering it. Well, there’s one YouTuber in particular who feels the same way and constantly lets those intrusive thoughts win, just not in the way you might think.

We’ve told you about Robot Cantina in the past. His tenacity in slipping tiny engines inside regular-size cars has become a bit of a regular hobby since he first installed a $99 Harbor Freight engine into a Honda Insight. Now, he’s back with a Saturn SC1, and the perfect small industrial diesel motor serves as its donor engine.

The engine we’re talking about is a three-cylinder Kubota D722 Super Mini with just 719cc of displacement. You probably haven’t heard of this engine before, given that it’s an industrial motor not typically used in vehicles, and there’s a good reason for that: it doesn’t make much power. In fact, at its redline of 3,600 RPM, the engine produces just 20 horsepower and 33 pound-feet of torque. Still, this YouTuber is determined to fit it in the Saturn and see if it has enough gall to move the wheels.

After removing the factory motor from the Saturn SC1, Robot Cantina fabricated engine mounts to hold the motor. Since he was pairing it with a Saturn MP3 close-ratio five-speed transmission, he modified the factory flywheel to mate with the tiny diesel engine. He sent it off to a machine shop and fabricated an adapter plate (using a hand-held angle grinder) out of quarter-inch thick steel to mount the engine to the transmission’s bell housing.

Once the engine was physically mounted into the bay, buttoning up the rest of the swap to have the car moving under its own power was fairly easy. Some additional fabrication was needed to build an alternator bracket, connect the throttle cable to the existing Saturn hardware, and new exhaust. A Honda half-size radiator was used for cooling, and a small fuel tank (sized at 3 or possibly 4 gallons, according to Robot Cantina) holds the diesel in the trunk. One other modification was called out by the YouTuber relocating the battery to the trunk. Functionally, this added nothing, but it was visually appealing since the battery is basically the size of the engine.

Now, the car isn’t exactly finished. Turning off the engine requires the fuel cutoff lever to be manually shut, the electrical system is in shambles, no power brakes, and there are a lot of unknowns on whether all of the parts used for the build will prove to be appropriate for it. And to top it all off, once the reliability problem is solved, the next hurdle will be turbocharging the tiny three-cylinder diesel. Thankfully, the prep work for the turbo has already started before dropping the engine in the car to make things easier later on.

The car is, however, good enough for a test drive. The YouTuber took the Saturn on the road with its new heart and can only describe its driving characteristics as being similar to a diesel-powered tractor.

Sprinting from zero to 60 MPH will happen in…well, never, though a top speed of around 45 MPH can be found in one minute with the pedal mashed to the floor. Keep in mind that this tiny diesel generator can only spin at a maximum speed of 3,600 RPM, but even then, there simply isn’t enough power to reach 60 MPH, or even maintain speed in fifth gear.

Robot Cantina says that he will attempt to adjust the fuel system’s mechanical governor—a few bolts—to unlock a bit more power. Theoretically, more power means a higher top speed, though he is unsure if aerodynamics will play a big part in reaching 60 MPH. Adding on the turbocharger later as planned may also help to change that.

You have to admit, even though this swap has a pretty major drawback, it’s still pretty cool to see unfold. Any unorthodox engine swap usually gets an enthusiast’s blood pumping (for better or worse), but seeing something like an industrial diesel motor make its way into a car is the very definition of insanity. And while there isn’t really a point to this swap, it seems like it’s just so on-brand for Saturn: a car engineered by a brand meant to be different, receiving what is probably the weirdest possible engine swap anyone could think of. But I’m living for it.