We Made the Dall-E AI Image Generator Make Some Cars. Here Are the Bizarre Results 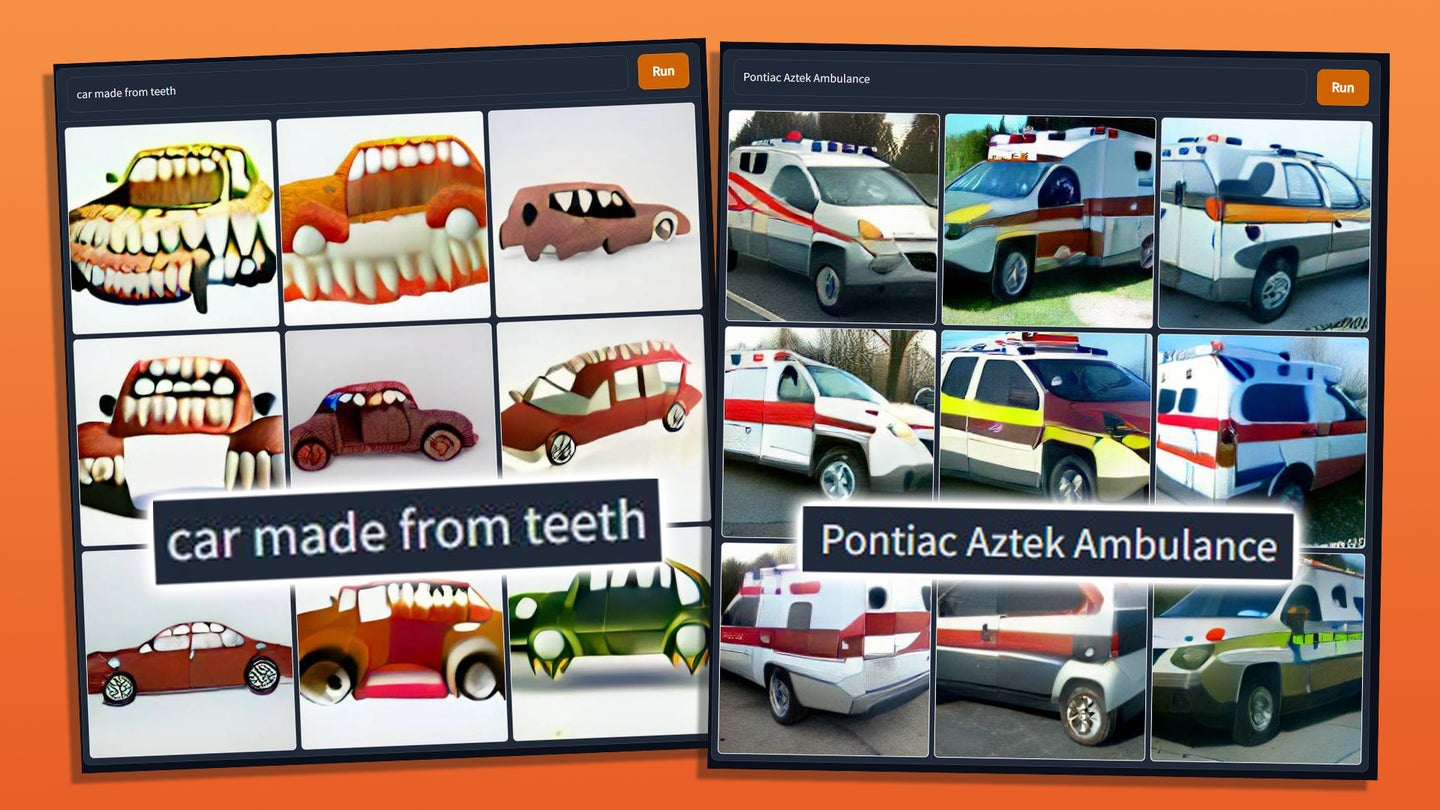 By now, you’ve probably seen images floating around of some weird AI-generated artwork named Dall-E. The internet has been going nuts over Dall-E, an online tool with a name paying homage to artist Salvador Dali. Dall-E uses machine learning to transform keywords into intricate renders that are oddly specific (and often hilarious). In fact, there are entire Twitter accounts dedicated to the images rendered with the tool. Here at The Drive, it got put to good use with some weird cars, of course. What else would you expect?

The real tool—OpenAI’s Dall-E 2—is in a closed beta, sadly, which means that most people don’t have access to generate high-quality renders. But fortunately, the tool that most people are using, Dall-E Mini, is open for everyone to try, and that’s how I got these results below.

I kicked things off by putting some cars in a few weird predicaments. For example, a Fiat 500 herding a flock of sheep and an Isuzu VehiCross climbing Mt. Fuji are two weird situations that I would have never expected to see. But there are cooler, weirder things I can have Dall-E do. Let’s send a Nissan Murano CrossCabriolet to the Nurburgring and the Wienermobile to compete in Formula D.

I then asked Dall-E Mini to come up with a few designs of vehicles that don’t actually exist but could in the future. For example, we know that Volkswagen is planning to revive the Scout brand, but what might that look like? I also tasked the AI to come up with some other concepts too. Maybe a new Honda Element, or its interpretation of Steve Jobs’ would-be design of the fabled Apple Car.

And in case you were wondering what an electric Ford Mustang would look like at an EV charger, well, Dall-E has some answers to that too.

Our own Stef Schrader pondered what a Porsche 911 might look like if it was made from cheese. Thankfully, Dall-E can show us what her ideal cheese car looks like, and boy, does it look unappetizing. Fortunately, the AI can also render up some cake cars to cleanse my palate. Dall-E also helped me prepare my latest food-related pitch for Quaker Oats: Oops! All Buicks. It’s crunchy, it’s hip, and it’s packed full of Detroit-backed grains.

Alright, enough of that. Let’s give some cars jobs. The Renault Twingo is a fun little ball of happiness. I’d love to have it deliver my mail every day, and thankfully, AI can let me know what I’m missing out on. I also decided that the next best food truck would obviously be the Nissan Rogue. AI agreed, of course, and designed a few potential eateries for me.

Have you ever wondered what kind of car would make the best lawyer? I have, and the answer is unequivocally the Subaru Outback. In fact, I can prove it simply by asking Dall-E Mini to show me what it would look like representing me in a courtroom. Would you convict me with that sort of representation? I don’t think so.

And finally, my Picasso: the Pontiac Aztek reimagined as an ambulance.

Enough about cars on the street—boring and overplayed. We need cars in more obscure places. Maybe we’ll fulfill Elon Musk’s Mars fantasy by actually putting a Tesla there. Or, hear me out, we’ll drive one underwater on the ocean floor. We can even take a trip back in time and see exactly what the cave people drove.

But if real places aren’t your thing, allow me to present what peak gaming looks like: a mashup between Forza and Skyrim. Bethesda, I’ll take my royalties now.

Honestly, I’m kind of impressed with Dall-E Mini, even if it is the light version of the real deal. It’s so weird to be able to plug in a weird amalgamation of words and output a photo of a Ford Pinto swimming at the bottom of the Mariana trench, but it’s also impressively cool and hilarious.

That being said, I need more. Show me some of your best Dall-E creations in the comments.

The post We Made the Dall-E AI Image Generator Make Some Cars. Here Are the Bizarre Results appeared first on The Drive.