What a QT: New Mercedes EQT Is the Small Electric Van We Need in the US 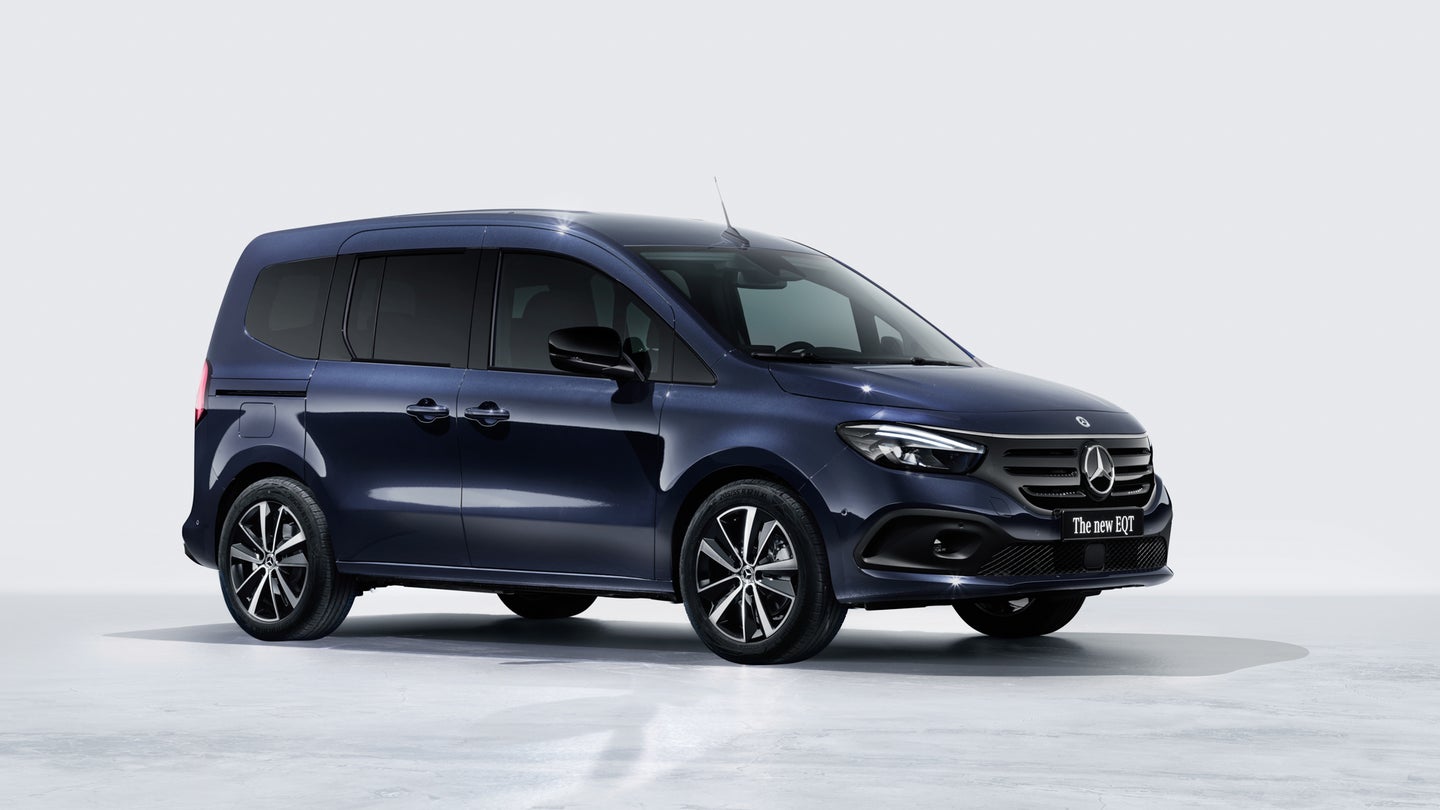 Here in the United States, we don’t get enough small vans. Sure we get the things like the Ford Transit but that’s designed more for commercial applications. The KIA Carnival made minivans stylish again but that’s a bit too big. The American market lacks so many of the cool, small, fun vans Europe gets, like the new, adorably named Mercedes EQT.

The Mercedes EQT is an electric version of the internal combustion-powered T-Class van. It features the same basic exterior design as the piston-powered T-Class, and is built on the same chassis, but it has a different grille. The EQT’s grille is more of a big black panel, with only a few horizontal slices in it, as it doesn’t need as much cooling as the normal T-Class.

It looks mostly the same inside, too, with a pretty typical modern Mercedes interior but that’s no bad thing. As with most Mercedes products, the interior is handsome and luxurious, even if it’s a bit predictable. But we’re talking about small vans. A flashy interior isn’t much of a priority. Instead, practicality and comfort come first.

Inside the new EQT, you’ll find the same interior space as the normal car. The EQT’s battery pack is built into the floor but it doesn’t impede on passenger space, thanks to clever packaging. That means it also has the same rear load sill height of 561 millimeters, which makes loading in heavy objects just as easy.

Mercedes didn’t provide a range number for the EQT but it has a smallish battery, at just 45 kWh. At launch, it only gets one powertrain option, a single electric motor with 122 horsepower and 180 pound-feet of torque. Using the onboard charger, the EQT can charge at up to 22 kW on an AC current, from either a home outlet or Level 2 charger. Its DC fast-charging speed is 80 kWh and can charge the car from 10-80 percent in 38 minutes.

Alongside the EQT, Mercedes also unveiled the Concept EQT Marco Polo, a camper version of the electric van. It comes with a scissor-style popup roof, which is slanted upward toward the rear, so there’s enough room for adults to stand inside. A bed can also be unfolded inside the cabin, which covers the entire rear of the van. The popup roof can be opened or even windowed, with a zipper on the rear. There’s a drawer system, a cooking station, a small refrigerator, and even a little sink. It’s actually pretty amazing to see how Mercedes was able to cram so much stuff into such a small van.

The non-camper Mercedes EQT starts at 49,000 euros ($61,633 direct exchange rate), which is pretty expensive for such a small electric van with a small battery. However, for anyone that doesn’t need their family van to drive very far, and they’d like a premium electric experience, the Mercedes EQT offers a pretty compelling overall package. Now all Mercedes needs to do is sell it ‘Stateside.

Have a tip? Send it over to tips@thedrive.com

The post What a QT: New Mercedes EQT Is the Small Electric Van We Need in the US appeared first on The Drive.