What I Learned Visiting One of Six VinFast Dealers in America 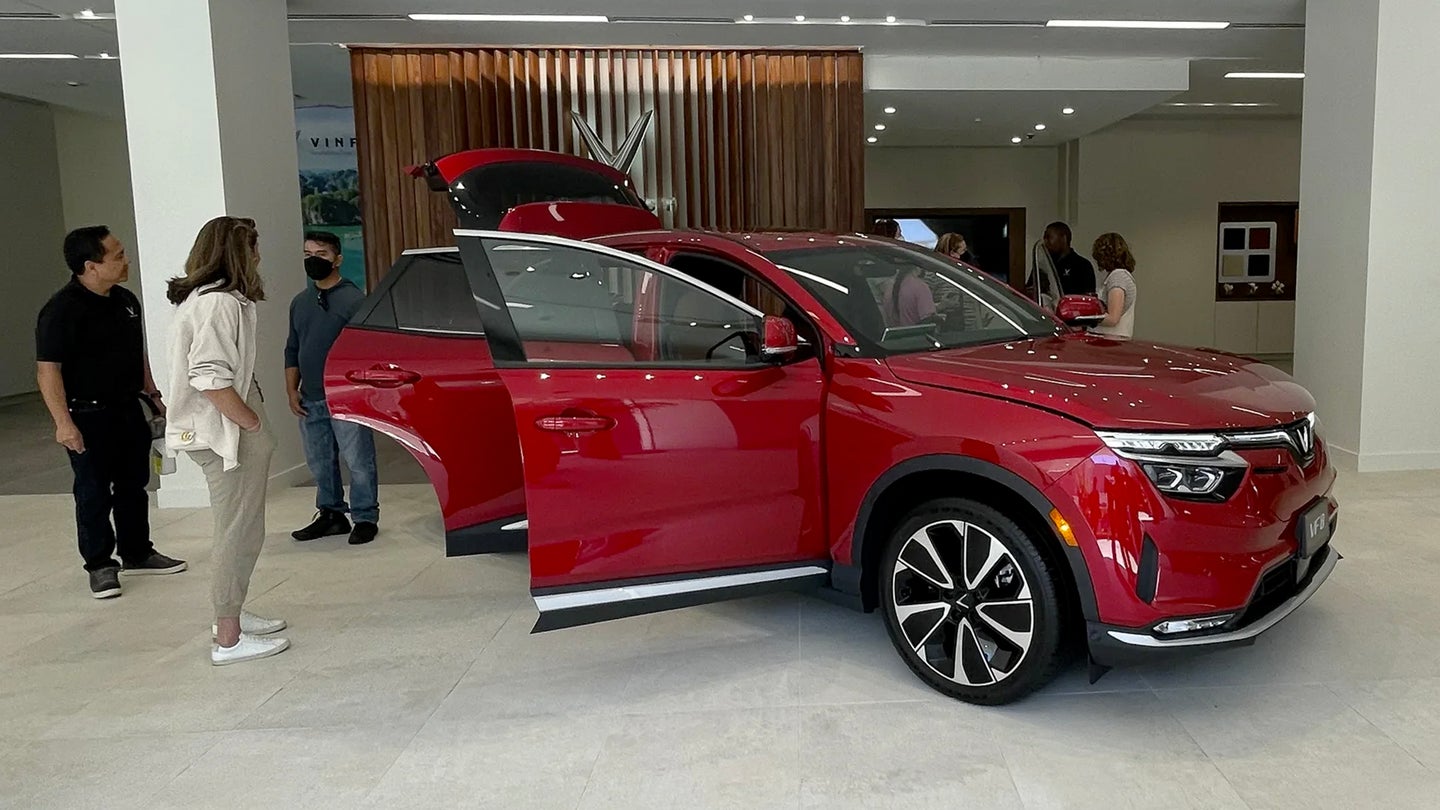 VinFast has gotten further than a lot of newly founded car companies so far. The Vietnamese automaker has a few years of sales in its home country under its belt and the ball’s rolling on plans to build its EVs in North Carolina. You probably haven’t seen a VinFast on American roads yet but on July 14, 2022, it opened six stores to sell cars in California. Here’s what it’s like to visit a VinFast showroom as a customer.

The VinFast store I visited was in the Hillsdale Shopping Center, in San Mateo, California. About 25 minutes south of San Fransisco, the retail store is right on the northern tip of Silicon Valley, not too far from Facebook (Meta) offices. The mall itself is solidly mid-tier, and the outdoor promenade has storefronts that are updated. It’s a nice place to be, but not overly spendy, or as show-stopping as say, Union Square in San Fransisco. I am speculating that maybe this is intentional; the cheapest VinFast will cost about $40,000, a lot cheaper than the $100,000 Lucid Air. Lucid seems choosier with where it places its in-person studios, often in high-dollar, high-arts spaces, like the Meatpacking District in NYC.

According to VinFast, its stores are divided into “1S,” “2S,” and “3S” tiers. The 1S stores are small spaces in high-traffic areas focused entirely on vehicle display and sales. 2S is said to be on main thoroughfares, a little bit bigger, and offering service and parts as well. 3S is the largest of the three, offering a traditional dealer sales and service department. I was in a 1S store.

I walked into a small showroom, not unlike that you’d find in damn near any other tech store or tech adjacent space. The walls are mostly glass and let in a lot of light, and the walls and floors are white and grey. If you’ve been to an Apple, Tesla, or Windows Store, the VinFast store won’t feel super different. VinFast says “the spacious in-store ambiance blends modern features in harmony with Eastern heritage and beauty inspired by nature,” which is true, I guess. A wood, possibly bamboo, applique adorns an accent wall, and videos and imagery all over the showroom play and show images of the very pretty Vietnamese countryside. I found it less sterile than the typical Tesla store. There was a glassed-off waiting room, but I couldn’t get any salesman to tell me exactly what it was for.

In the middle of the showroom, sat one lone model—the VinFast VF8. VinFast’s PR department explained to me that only the Santa Monica location would have both the VF8 and VF9.

I took one look at the red VF8, and one of the ten or so salesmen in black polo shorts smiling and abuzz with enthusiasm with the brand, walked over to assist me. The room was full of wanderers and mall walkers who had stumbled into the showroom on a Saturday morning. Most seemed like random curious passersby, I think I may have been one of the few who came intentionally.

The salesman was helpful, giving me an overview of the vehicle’s specifications, pricing, and incentives. I prodded and poked around the VF8, but the salesman was adamant that it was a preproduction vehicle. It felt it, some trim pieces were not finished, and the salesman told me that some functions were disabled. I reserve full judgment for the actual vehicle when I can get my hands on a production model. From what I can tell sitting in a static, showroom vehicle, the VF8 seems to be about the same size as the Volkswagen ID.4, but with more legroom, softer seats, and a usable frunk.

I asked the salesman how one would go about purchasing a VinFast vehicle. The salesman told me that it’s as simple as meeting with a salesman in a VinFast store, who will help you configure a new vehicle. I pressed the man further, asking if I could simply build and order online, and take delivery at home (or a VinFast store). He said “yes, but it might be best to order in person,” I assumed he was just being helpful, but he might be right.

VinFast has a configurator for the VF8 and VF9, but the configurator doesn’t have pricing. When the configurator launches, it displays a message that the configurator is for illustrative purposes, and does not currently apply to reservations. The configurator has no pricing, either. If you wish to purchase a VinFast, it requires a $200 reservation, in which you will be paired with a VinFast representative who will help you spec your vehicle. This isn’t unique to VinFast, Rivian does this with its “Rivian Guides,” but at least the Rivian configurator gives folks an idea of how much their dream truck will cost. Later, when I returned home to Ohio, I called the Vinfast customer service hotline, which informed me that the configurator’s pricing won’t be added until “a later date.” OK.

I reached out to Vinfast for clarification, and it seemingly seconded my “concierge,” somewhat in-favor-of in-store sales approach. A representative of Vinfast’s PR department said that the brand wants a “seamless online-to-offline sales experience.” Customers can make reservations online, yes, but “for direct sales at VinFast Stores, customers will receive detailed and specific consultation on product options and financial solutions,” wrote the VinFast representative, via email. “In-store customers will also be able to experience several options including colors, materials, and features in-person, allowing them to select and reserve VinFast cars more easily and enjoyably,” the representative continued.

I left the VinFast store with more questions than I came with. The salesman thanked me for my time, adding that his store would be getting a VF9 display in a few weeks. Deliveries of the VF8 could happen as soon as late September. That’s a tall order for a company that has a product with a lot of unanswered questions.

We’ve seen this before—new companies with deep pockets full of cash insist they can do the EV thing better than legacy automakers. But can they? Just think of the number of EV startups that have come, gone, and stuck around, like Lucid, Arrival, Rivian, Tesla, Bollinger, SF Motors, Byton, Fisker, Kandi, Alpha Motors, Nikola, Faraday Future, Canoo, and dozens more that would exceed the word limit I had in mind for this paragraph. Many have struggled to make it past a handful of rolling prototypes, let alone open a store, allow potential customers to ogle a physical product, and accept reservations for said physical product. On one hand, VinFast is far ahead of a lot of them with its physical stores. On the other hand, VinFast needs to clarify its plans if it ever expects to sell any vehicles in the United States.

The post What I Learned Visiting One of Six VinFast Dealers in America appeared first on The Drive.