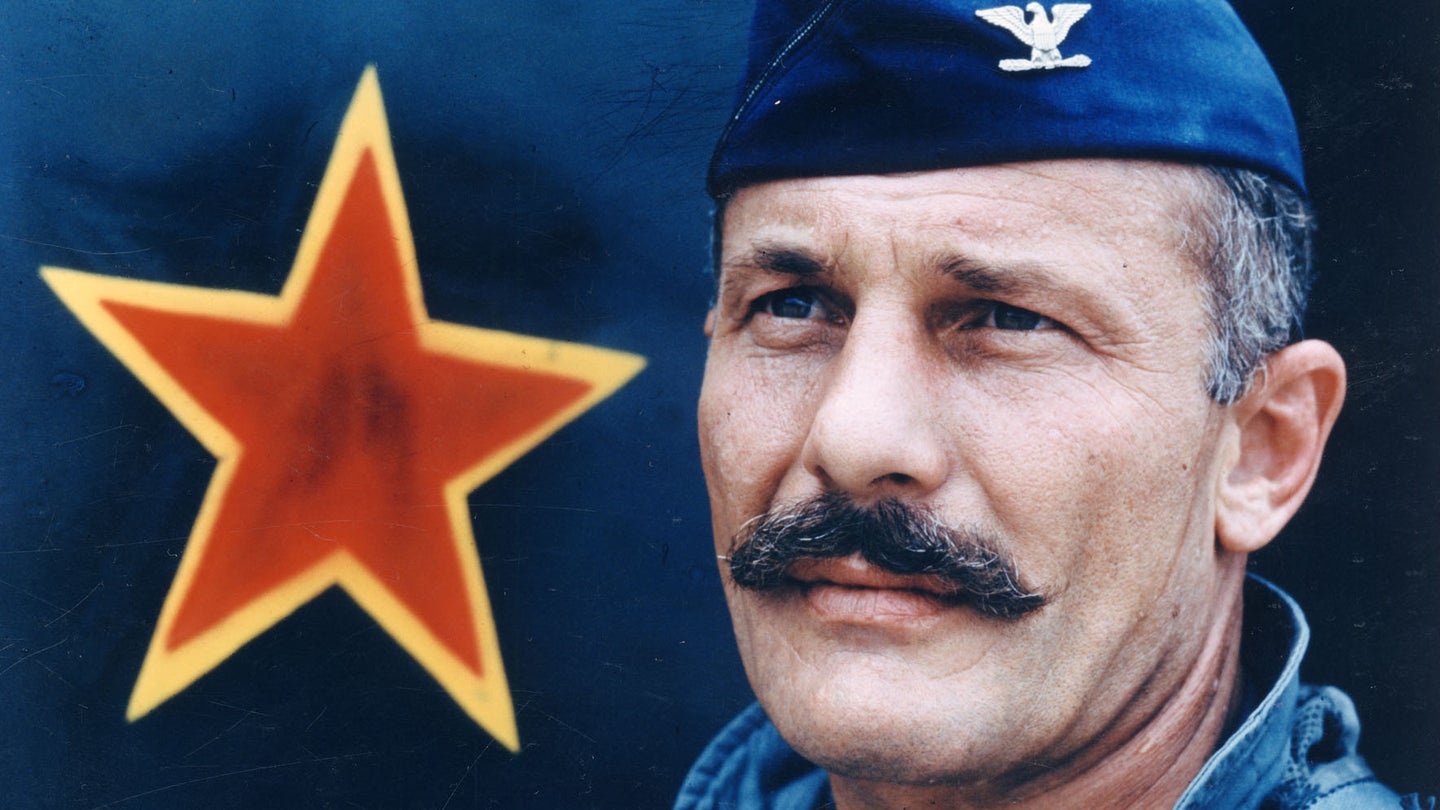 For many, the mustachioed, swashbuckling figure of Brig. Gen. Robin Olds remains the epitome of the Air Force fighter pilot. A triple ace from his aerial combat in World War II and Vietnam, Olds was a consummate flier, and master tactician, and possessed the charisma that made him a natural leader. What’s less known is his influence further afield, during a unique exchange posting in the United Kingdom, where his reputation continues to be held in the highest respect within one frontline unit in particular.

Olds was born exactly a century ago, on July 14, 1922, in Honolulu, Hawaii. He grew up in Hampton, Virginia, and graduated from the U.S. Military Academy, West Point, in New York. An accomplished sportsman, he was captain and starting tackle for the Academy’s football squad and was named to the 1942 All-America team. The following year he completed pilot training, was commissioned as a second lieutenant, and began a stellar career in the cockpit of fighters, which would take him from the P-51 Mustang, to first-generation jet fighters, to the F-4 Phantom II.

“Olds was big, tough, smart, and swaggering, not to mention brave and highly skilled,” recalled Walter J. Boyne, the former director of the National Air and Space Museum in Washington, D.C., and a retired Air Force colonel. “Even Hollywood would have had a hard time portraying the genuine article on the big screen. He was a truly dynamic force, one who had a positive impact on the Air Force for more than 60 years.”

By the end of World War II, Olds had established his reputation as a talented fighter pilot in the P-51 Mustang, having shot down 12 enemy aircraft and destroyed another 11.5 on the ground, all in the European Theater of Operations. Aged just 22, he was given his first squadron command. In an early example of his tactical nous, Olds observed the inaccuracy of Allied heavy bombers and campaigned for massed formations of P-51s to be used to hit strategic targets in Germany. The Air Force ignored the idea, but Olds’ radical thinking was by then becoming established.

Soon after World War II, Olds converted to the P-80 Shooting Star, the Air Force’s first frontline jet fighter, with the initial squadron to be so equipped, at March Field, California. In this period, he also took part in air races on behalf of the Air Force and flew with the service’s first jet aerobatic team.

This then led to an exchange posting that, while relatively brief, would leave a lasting impression on the U.K. Royal Air Force (RAF).

Under the RAF Exchange Program, Olds served as the commander of No. 1 (Fighter) Squadron at RAF Tangmere in southern England — the service’s premier fighter unit — for an eight-month period in 1949. At that time, the squadron was flying the Gloster Meteor jet fighter, a British counterpart to the first-generation P-80.

Having a foreign pilot serve as the commanding officer of an RAF squadron was highly unusual and is an achievement that’s probably never been repeated. But it was an indication of the high regard with which Olds was already held, while still in his mid-20s.

“In the Royal Air Force, it did not get any better than 1 (Fighter) Squadron,” recalled Mike Sutton, a British Typhoon fighter pilot and, many years later, the successor to Olds as commander of the historic unit. Sutton led the squadron between 2014 and 2016 and, in the process, flew combat missions against ISIS over Iraq and Syria.

On his desk at his new squadron posting was Olds’s book, Fighter Pilot, and the American commander would serve as an inspiration for Sutton, despite the march of technology and the radical changes in air combat doctrine since his heyday leading the 8th Tactical Fighter Wing during the Vietnam War.

“He was a good role model,” Sutton reflected, and not just because of his historical connection to the squadron, which was by now based at RAF Lossiemouth in Scotland. “He remains, to this day, the most revered fighter pilot in the U.S., on account of his fearsome reputation in air combat and as a passionate wartime leader.”

“General Olds was again full of wisdom when it came to working with engineers and ground crew,” Sutton continued. As boss of a frontline Typhoon FGR4 squadron, he was responsible for 130 men and women “from all walks of life, with their own ambitions and differing experience,” and the following words from Olds were ones that he reflected on more than once during his tenure:

“Get to know those people, their attitudes, and expectations … Don’t try to bullshit the troops, but make sure they know the buck stops with you, that you’ll shoulder the blame when things go wrong. Recognize accomplishment. Reward accordingly. Foster spirit through self-pride, not slogans … Only your genuine interest and concern, plus follow-up on your promises, will earn you respect.”

“Olds’s biography Fighter Pilot told of a bygone era, but many of the lessons endured,” Sutton explained. “I set clear priorities and boundaries. I was open to adapting our processes when needed. But when it came to the engineering, I’d had no training whatsoever and had to completely rely on the expertise and judgment of the ground crew.”

Olds had died in 2007, aged 84, and in recognition of the unique position that he held among all fighter pilots, and for 1 (Fighter) Squadron, in particular, the decision was taken, under Sutton’s leadership, to memorialize him in the squadron bar at Lossiemouth.

Unlike that familiar trope of World War II movies, the officers’ mess, the squadron bar is entirely democratic. The mess may be open to only around 20 percent of the unit, while the squadron bar is also open to sergeants and junior ranks. That was an important distinction for Sutton and choosing to name the squadron bar after Olds also paid homage to his style of leadership, as well as keeping morale in the squadron high.

“A disused mezzanine floor off the back of one of the hangars was converted and it was named the Robin Olds Bar after our esteemed former CO,” Sutton said. “General Olds epitomized the qualities of a maverick aviator which we most admired. Even as he rose through the ranks, he had little patience with hierarchy and cared most about those under his command. He also famously loved a party and married the Hollywood actress Ella Raines.”

This relentless program saw Sutton and 1 (Fighter) Squadron introduce new capabilities to the Typhoon, including the Paveway IV precision-guided munition, ahead of the jet joining the coalition offensive against ISIS, under Operation Shader, in late 2015.

After almost five months of operational Shader missions flown from RAF Akrotiri in Cyprus, in the eastern Mediterranean, it was time for Sutton and his squadron to return to the United Kingdom, their place being taken by another Typhoon unit. As he reflected on the end of his mission, Sutton once again paused to consider his American predecessor and his insistence on leading from the front.

“My fight was over. I felt somewhat at a loss and, at the same time, a paternal pride in how everyone had performed,” he said. “Robin Olds refused to stop flying after his hundred missions over Vietnam and continued for dozens more. He didn’t want to walk away. I understood that. It’s difficult when you are completely bound up and emotionally involved in an operation.”

Robin Olds may only have spent less than a year at the helm of 1 (Fighter) Squadron, but decades later, his legacy remained strong.

His time in England was just one of many duty assignments that also took Olds to Germany, Libya, Thailand, and across the United States, commanding squadrons, airbases, groups, and wings. There were also staff assignments in a numbered Air Force, Air Force Headquarters, and the Joint Chiefs of Staff.

Today, however, it’s his wartime service in Southeast Asia for which Olds is perhaps best known.

Flying an F-4, Olds entered combat in Vietnam in October 1966, and he would eventually complete 152 combat missions in theater, including 105 over North Vietnam. In the process, he shot down two North Vietnamese MiG-17 and two MiG-21 jet fighters, the two MiG-17s being shot down in the course of a single mission after they shot down his wingman during a major dogfight.

As commander of the 8th Tactical Fighter Wing at Ubon Royal Thai Air Force Base, Thailand, Olds established a reputation as a flamboyant fighter pilot but also a superb tactician. “The wing needed Olds as badly as he needed the wing,”  Walter J. Boyne later wrote. “He introduced himself to his largely dispirited and tired pilots in his usual fashion, with a challenge: Olds was going to fly as a new guy until he learned his job — and then he was going to lead the wing into combat from the front.”

Always willing to fly in the face of Air Force orthodoxy, Olds masterminded Operation Bolo, in which F-4s imitated more-vulnerable F-105s and lured North Vietnamese fighters into a trap. Seven MiG-21s were shot down in the process and the 8th TFW was propelled to the status of the most successful Air Force F-4 wing in Southeast Asia. For Olds, this was a vindication of a kind: Even before Vietnam, he had been convinced of the continued relevance of old-school air combat, despite what he saw as Tactical Air Command’s focus on the nuclear strike mission.

As to what Olds had brought with him to Vietnam from that posting to RAF Tangmere nearly two decades before, that’s harder to say. However, one trademark of his later appearance, his non-regulation mustache, was indeed inspired by his time in England.

Olds’s daughter, Christina, explained: “One thing to know is that the mustache he grew in Vietnam, starting two weeks after Operation Bolo on January 2, 1967, was in homage to Tommy Burns of 1 Squadron. My dad loved Tommy Burns… I can just imagine the hilarious conversations they must have had.”

Burns, complete with mustache, can be seen in the front row, center, in the black-and-white photo of 1 (Fighter) Squadron Meteors earlier in this article. And the famous Olds mustache, meanwhile, has gone on to inspire Mustache March events within today’s U.S. Air Force.

That connection, between Robin Olds and the U.K. Royal Air Force, may be little known, but the legacy of this consummate fighter pilot, and fighter leader, is as potent as ever, a century after his birth. And although manned combat aircraft continue to give way to unmanned ones, Olds’s description of a fighter pilot remains timeless:

“Fighter pilot is not just a description. Fighter pilot is an attitude. It is cockiness. It is aggressiveness. It is self-confidence. It is a streak of rebelliousness, and it is competitiveness. But there’s something else — there’s a spark. There is the desire to be good. To do well; in the eyes of your peers, and in your own mind.”

With thanks to Mike Sutton, whose book, Typhoon, is out now in paperback, ebook, and audiobook.

The post Why The Legacy Of Robin Olds Lives On In Today’s Fighter Pilots appeared first on The Drive.