Would You Buy An Alpina-Tuned Version Of The Toyota GR Supra? 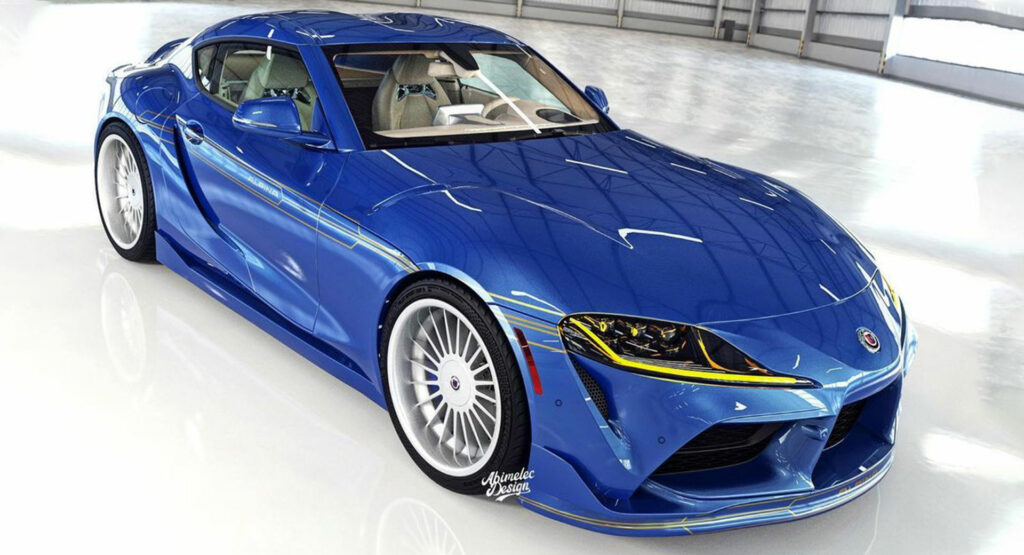 These are renderings by Abimelec Design and are not related to nor endorsed by Toyota or Alpina.

For many, the current Toyota Supra has way too many BMW parts for it to even be considered a Toyota.

From its engine, transmission, and most of its interior features, the Supra is dominated by BMW components and given that, designer Abimelec Design has imagined what the Supra could look like if it was modified by Alpina for Hagerty. Yes, the same Alpina that’s responsible for tuning and upgrading BMW models.

Watch Also: How Does The Manual 2023 Toyota GR Supra Compare Against The GR 86?

In creating the Alpina-branded Supra, the designer tweaked the design with an extended front splitter and new body-colored side skirts. The rear of the sports car also features a new bumper and carbon fiber diffuser, making it a little more menacing but striking that good balance that Alpina is known for.

The Supra has also been transformed with a number of gold accents and pinstripes that run across the front splitter and down the sides. The car also has yellow-tinted headlights and DRLs and is rocking the kind of tightly-spoked wheels that only an Alpina can pull off.

A handful of different exterior and interior color configurations have been imagined. The most striking pairs a blue exterior with a white interior while there is also purple with a purple interior, dark red with a dark red cabin, green paint with tan-colored leather, and a black exterior finish with a dark red interior.

Obviously, Alpina itself will not release a tuning package for the Toyota Supra. In fact, it doesn’t even offer a tweaked version of the BMW Z4 which the Supra shares its underpinnings with. That’s a shame as we think this Alpina-tuned Supra looks excellent, but Alpina only does BMWs, not Toyotas – and not even all BMWs at that.