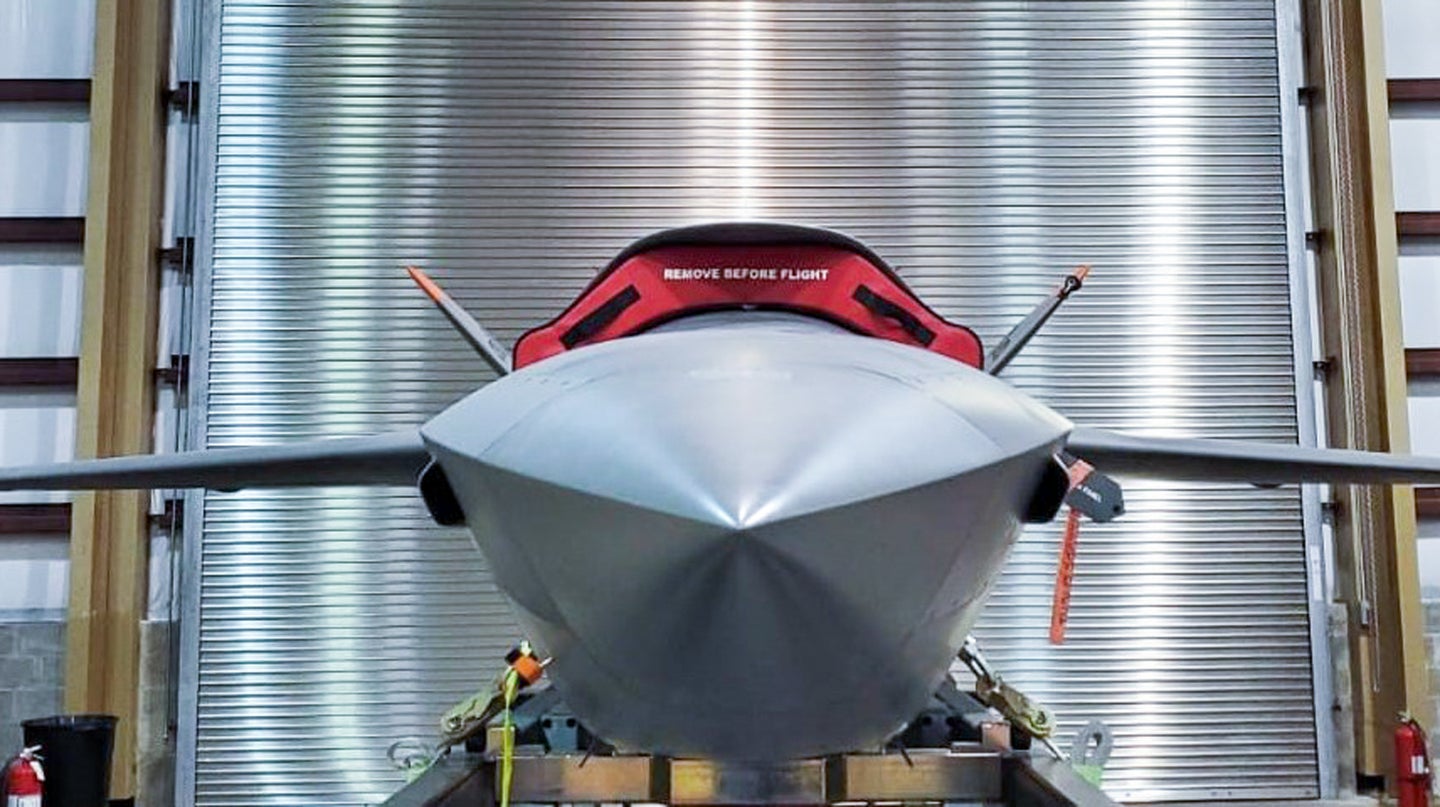 Eglin Air Force base last month acquired the first of two stealthy XQ-58A Valkyrie drones, opening the door for a new level of autonomous aircraft testing at the installation. The U.S. Air Force expects to take advantage of Eglin’s infrastructure to expand its testing work involving these drones, which the service has been experimenting with in varied scenarios for years now.

According to an Air Force press release, the Valkyrie was delivered to Eglin’s 40th Flight Test Squadron (FTS), a research and development unit assigned to the 96th Test Wing that is focused on facilitating developmental tests for tactical aircraft. Taking ownership of the Valkyries is a notable step for the program and the wing, as it will allow the 40th FTS personnel to better determine and record the resources required to both host and fly the drones.

The XQ-58A Valkyrie is a 30-foot-long, rail-launched drone produced by the California-based drone maker Kratos Defense. It’s designed with a maximum launch weight of 6,000 pounds, can fly at altitudes up to 45,000 feet above sea level, and has a maximum range of about 3,000 miles. Although, it is worth noting that this is only the drone’s expected performance, as Kratos has not disclosed how closely they’ve come to demonstrating this range in reality. Valkyrie’s ability to operate with certain levels of autonomy is supported by its onboard computer system, which allows the aircraft to determine the optimal flight path and corresponding throttle settings based on commands given by a ground control station or airborne fighter.

Valkyrie has provided the Air Force with a wealth of valuable testing information in various experimental environments in recent years. In 2020, the drone served as a datalink between an F-22 and an F-35, and then in 2021, its weapons bay was used for the very first time as a launch platform for smaller ALTIUS-600 drones. Kratos is also expected to offer a modified version of Valkyrie for the Air Force’s Skyborg initiative, which seeks to integrate artificial intelligence (AI)-powered autonomy into uncrewed combat vehicles. Kratos and Eglin together have actually already been testing Skyborg on less-advanced UTAP-22 Mako unmanned aircraft, which you can read about in detail here.

Leading the testing effort at Eglin will be the Autonomous Aircraft Experimentation (AAx) team, which is focused on evaluating autonomy systems for uncrewed aircraft, in partnership with the Air Force Research Laboratory (AFRL) Strategic Development Planning and Experimentation Office. Both AAx and the AFRL will take advantage of Eglin’s vast range complex and use the Valkyries to put the autonomous aircraft to the test in ways that previous evaluation environments couldn’t do as easily or as affordably as the Florida panhandle-located base can.

Eglin is known to be among the Air Force bases that are at the forefront of capability development and evaluation. The Air Force, as well as the Navy and Marines, are increasingly faced with the need for more airspace to conduct tests and training for a variety of reasons, and Eglin’s unique geographical disposition can help provide just that.

With its 100,000 square nautical miles of off-shore ranges in the Gulf of Mexico, the base offers the benefit of having expansive open overwater areas rife with testing potential. Up until now, a majority of XQ-58A testing has been carried out at the Yuma Proving Ground in Arizona, which is a sprawling Army-run installation that couldn’t quite support the Valkyrie fielding schedule that the Air Force has set for the mid-to-late 2020s.

“The data generated during previous tests, along with feedback provided from our user community, show that in order to rapidly develop and mature tactical autonomy on an appropriate timeline, investment in, and utilization of, appropriate military range resources is required,” said Matthew Niemiec, AFRL autonomous aircraft experimentation portfolio lead.

The Air Force’s desire to maintain the momentum of Valkyrie’s maturation could very well be related to the service’s larger but classified Collaborative Combat Aircraft (CCA) program, which Air Force Secretary Frank Kendall in September revealed could begin in Fiscal Year 2024. The CCA effort is broadly aimed at producing autonomous drones that could operate alongside and network with fifth-generation aircraft like the F-35, F-22, and the future Next-Generation Air Dominance (NGAD) system. Compatibility with older aircraft is also being explored.

However, what really solidified the decision to send the Valkyries to Eglin was the base’s built-in communications support infrastructure. While Valkyrie’s ability to launch and recover independently from runways certainly offers some logistical wiggle room for testing, the drone is still a relatively new system for the military, so a significant portion of the infrastructure and logistics that support Valkyrie tests have had to be constructed from scratch. Now, engineers will be able to use Eglin’s established Central Control Facility to observe the drone’s performance while in flight and analyze the data gathered after the fact.

The 96th Test Wing also already has an expansive role in validating the performance of various systems throughout the entirety of the development process. This has provided Eglin with the experience necessary to implement the autonomous aircraft operations, airspace, and safety procedures necessary to ensure safe and effective flight testing of uncrewed aircraft.

“When you combine the XQ-58A with the Eglin Range infrastructure, you get an uncrewed aircraft that enables real, open-air test of flight autonomy software capabilities while also proving out the resource requirements that could be used for future combat collaborative aircraft,” said Maj. John Nygard, 40th FLTS AAx team lead.

The base will, however, be making one investment. The Eglin team will be building out a “data-storage and simulation environment intended to capture operator feedback and integrate their inputs into the autonomy software development process.” Through this, AAx and the AFRL are hoping that Valkyrie could then host a variety of flight autonomy software ‘brains’ thanks to its open-architecture design that were first tested in the simulator as opposed to in-flight.

This could eventually include the evolving Skyborg Autonomy Control System or the autonomy engines being developed under the Defense Advanced Research Project Agency’s Collaborative Operations in Denied Environment (CODE) program that were tested aboard a General Atomics Avenger drone in 2020, for example. This would also allow for the testing of other autonomy cores provided by third-party government and industry partners.

The simulation environment would even extend to support the fact that much of Valkyrie’s overarching design is centered around maintaining the program’s affordability. This ambition is also commonly referred to as attritability and is a defining aspect of the AFRL’s Low-Cost Attritable Aircraft Technology (LCAAT) program, of which Valkyrie is an important piece. LCAAT seeks to balance cost and capability — most importantly, survivability — by developing low-cost or even ‘expendable’ aircraft for use in scenarios deemed to be of higher risk in place of more ‘valuable’ assets.

Niemiec said that the simulation investment will enable Eglin to focus Valkyrie flight test efforts on delivering autonomy software capable of accomplishing operator-defined missions. Allowing the Air Force to experiment with not only just Valkyrie but other CCA possibilities and the autonomy engines that could power them will be critical to the overall success of the NGAD effort, into which initiatives like Skyborg, CCA, and LCAAT will feed. Not only that but the experience could also help the drones earn the critical trust of airmen. We could see an effort to supply these types of drones outside of NGAD and CCA, possibly to older 4th generation fighters, as well.

Eglin is wasting no time getting its new Valkyrie in a testing environment as the Air Force reported that the first evaluation is scheduled for next month, though no additional information was provided in terms of what the test will consist of. In the press release, Nygard revealed that the ultimate goal is to begin leveraging Valkyrie for experimentation with “crewed-uncrewed teaming display solutions” by fall 2023, but what exactly that will entail was just as unclear.

With two now set to permanently reside at Eglin, the XQ-58A Valkyrie is growing its reputation as one of the most prominent players in the Air Force’s steadily evolving plans for an uncrewed future.