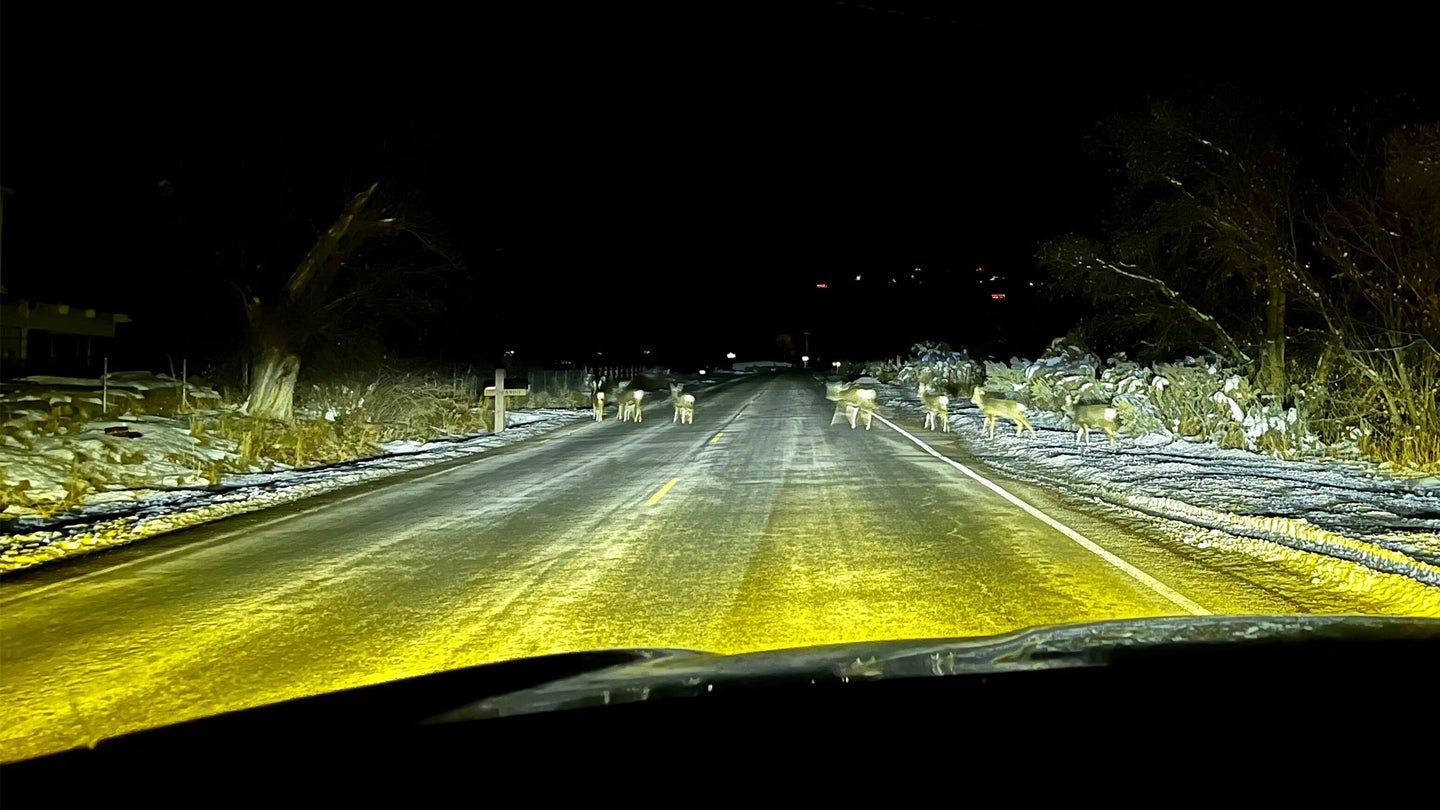 The world of off-road lighting is absolutely wild. From Hellas to KC Hilites, ARB to Lightforce, and everything in between, there’s every sort of light technology available for a price. But while choosing the right one that suits your build is more up for debate, one of the least understood aspects of off-road light is the difference between white and amber/yellow tints.

I’ll admit that I didn’t know the difference between the two before starting this article, even after installing some off-road lights myself. That’s why I called in the biggest guns I could find: Dr. John Bullough, the Program director for the Department of Population Health Science and Policy and a staff member in the Light and Health Research Center at the Icahn School of Medicine at Mount Sinai, and Dr. John D Joannopoulos, the Francis Wright Davis Professor of Physics and Director of the Institute for Soldier Nanotechnologies at MIT. And no, we did not coordinate our names.

They not only graciously answered my emails, but the two scientists educated me on the difference between the two and the physics and physiology behind those differences. Welcome to a masterclass in off- and on-road light.

Before we get into the difference between white and yellow/amber lights, a brief discussion on what light color temperature is and the Kelvin Scale.

“The basis of how light temperature is measured is against a Kelvin Scale,” states Shutterstock, further adding “Of course, when we hear the word kelvin, we typically think of one of the measurements to quantify heat, but it’s also a term used to measure the color of light. The idea is that you compare the color of the light source to that of a theoretical black body radiator when it’s heated. What does that mean? Well, when a substance is heated, it also emits light. And how much that object is heated determines the color makeup of that light; think the hotter a flame, the more it burns from red to blue.”

The Kelvin Scale uses a value range starting at 1,000K and ending at 10,000K, with the color spectrum running between red light (1,000K) and moving toward blue (10,000K). Amber/yellow off-road lights are at the lower end of the spectrum, while white light is closer to blue.

That distinction is important to understand for the following.

Why Are Off-Road Lights Yellow?

The prevailing theory parroted on nearly every website, forum, and YouTube video is that there’s “potential for yellow light to result in reduced reflection or scatter from fog, raindrops and snowflakes” according to Dr. Bullough, and “is part of the reasoning behind the law in France that required headlights to be yellow up until the 1990s.” But that’s not actually what’s occurring.

“However, the effect of different wavelengths (colors) of light on scatter by water droplets in fog or rain (or from snow) is negligible,” Dr. Bullough added, saying “The reason is that even for fog, the size of the particles is much larger than the wavelength of the light. When the particle size is similar in size to the wavelength (like molecules of gases in air) then short wavelengths (violet and blue) will scatter more than longer wavelengths (yellow and red). That’s why the sky is blue (the short wavelength light that appears blue is scattered more than the longer wavelengths), but clouds (which are made up of larger particles, more similar to fog) are white because all wavelengths are scattered equally.”

So why does everyone think yellow lights work when they don’t? Well, because they actually do but not because of the physics of light or particulate water, but because of biology.

“The extinction coefficient of light does not vary much in the visible or even through the IR (see attached paper),” Dr. Joannopoulus told me, “I think a more important issue of the wavelength of light is related to the fact that the pupil decreases in size as you go from red to blue wavelengths. Since a larger pupil allows for more light to pass into the eye, red or amber light is best. Also since in fog you get reflected light back into the eye, so in this case, it is also best if the light is red or amber so that the pupil stays as large as it can.”

Dr. Bullough confirmed this, stating “There is still a reason that yellow lights might be better than white lights for driving in fog/rain/snow, and it has to do with the visual system. At lower light levels experienced at night, our visual system seems to be more sensitive to shorter wavelengths. Our eyes have two kinds of photoreceptors; rods and cones, and at daytime light levels, we see with only our cones, but at nighttime levels, we see with a combination of rods and cones. (At really, really low light levels we would see only with our rods, but that’s much lower than the light levels we experience while driving at night.)”

“Rods have their peak spectral sensitivity in the blue-green part of the spectrum, which corresponds to shorter wavelengths than the cones, which are maximally sensitive in the green-yellow part of the spectrum (longer wavelengths),” added Bullough, saying “Also, rods seem to be more sensitive to motion, and blowing snowflakes and even fog, and falling raindrops can enhance the rod sensitivity. That means if the headlights contain more short-wavelength (blue/green) energy, they will make the blowing snow/fog/rain more visible (more distracting) than they would be under headlights that are yellowish.”

“This phenomenon is different from the physics of light – both colors will reflect/scatter equally from fog/rain/snow, but our eyes will be more sensitive to the snow/fog/rain particles when the light has more blue-green content.”

There you have it. Yellow off-road lights do indeed work, but all the talk online about why they work is wrong! What’s interesting to me, however, is the conversation we can now have about why we’ve switched from warmer color headlights to the cool white/blue LEDs now stuck to every new vehicle rolling off the assembly line. If the science supports warmer tones, what gives? That’s a question for another article.

Testing With A Honda Ridgeline

After I spoke with both scientists, I knew I had to see how it worked in action. Unfortunately, Lightforce doesn’t have yellow covers for the company’s Striker off-road lights, so testing them on my Can-Am project couldn’t occur. I turned to my 2019 Honda Ridgeline and opened up Amazon to grab a set of yellow-tinted LED fog lamp bulbs.

The stock Honda fog lamp bulbs are around the 5,000K range on the Kelvin Light Scale, but not yellow. The new bulbs are 3,000K and most definitely yellow. What I found, thanks to a handful of snows that brought 10+ inches of precipitation, was that they did have a noticeable effect on how my eyes felt after driving through the weather.

It wasn’t night and day, if you’ll allow the pun, but that’s likely because the Ridgeline’s stock LED headlights are pretty dang powerful themselves. If I had yellow/amber off-road lights like a lightbar (stay tuned, more on that soon), I think the overall effect would be that much greater.

What’s fascinating about both scientists’ explanations is that it seemingly gave credence to the effectiveness of nighttime driving glasses. I’ve long suspected these glasses are just scams, but their explanations say otherwise and actually reduce eye strain caused by high light temperatures.

I also prefer yellow-tinted glasses when I ride motorcycles during the daytime, too. First, they’re not as tinted as normal sunglasses. Too dark and you could miss something in the road. And, to me, I felt they offered more contrast to the world I ride through. But in the name of science, I asked Dr. Bullough whether or not there was an effect during daytime driving/riding.

“However,” he added, “the glare-reducing effects of yellow light and yellow-tinted glasses (discussed in the other paper I sent “sae03a.pdf”) is still noticeable even at higher light levels, so that feeling of increased visual comfort with yellow glasses is real. But in the daytime the glasses probably wouldn’t do much for you in terms of making blowing snow or fog particles less distracting.”

The only problem? I just broke my yellow-tinted glasses.

So there you have it. There’s the ACTUAL reason why yellow/amber off-road lights work and the mechanism behind it.

The post Yellow Off-Road Lights Work. Here’s Why appeared first on The Drive.