Yes, You Can Take a Tank Through a KFC Drive-Thru 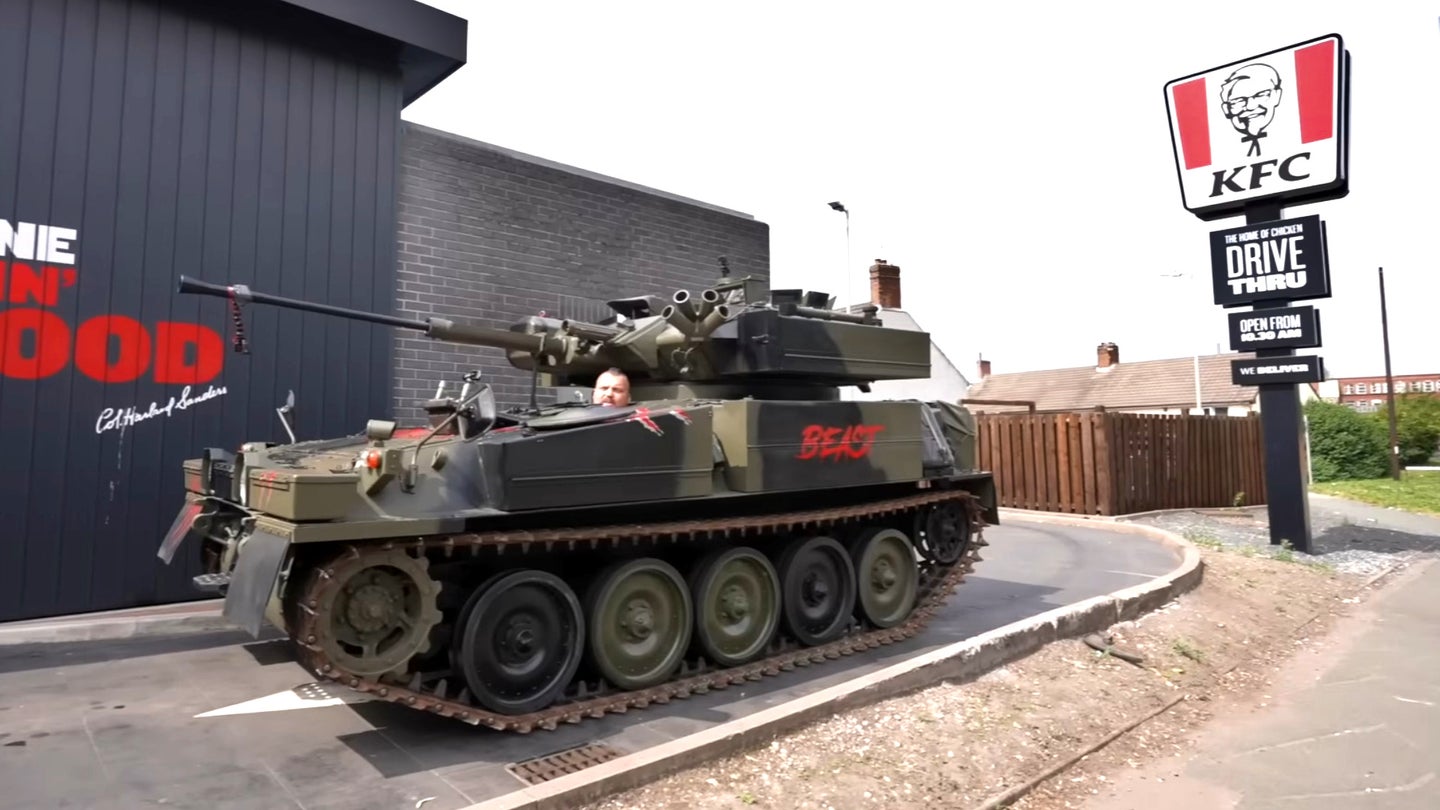 A British strongman has proven it’s possible to take on the local KFC drive-thru in a tank, in a YouTube video posted this week.

Former World’s Strongest Man, Eddie Hall, took on the challenge in a demilitarized CVR-T Scimitar, purchased from Tanks-Alot. Military pedants would call it an armored reconnaissance vehicle, but to the broader public, it’s a tank. It’s so British that it runs a Jaguar 4.2-liter petrol engine, modified with a lower compression ratio to allow it to run properly on lower-quality fuel. It’s also fully road legal, though regulations limit it to 20 mph on public roads.

Getting the tank through the drive-thru required a deft touch at the controls. The path around the fast-food restaurant was tight, and Hall didn’t want to clip the curbs or scrape the walls in the process. The limited vision from the driver’s position didn’t make things easier, either.

However, the Scimitar is a lot smaller than a full-sized main battle tank, and made it to the order speaker without issue. Hall elected to order a 12-piece Boneless Feast and a Sprite. From there, it was a matter of squeezing up to the window to pay and pick up the meal. With the driver’s position on the opposite side of the vehicle, Hall used a litter picker to swipe his card across the reader, as well as to grab the order.

It may seem like a harmless merry-making lark, but Hall is in fact guilty of a dire offense. The drive-thru is no place for tomfoolery or shenanigans. It’s a place for busy, desperate people, with busy, desperate lives to get their greasy food as quickly and efficiently as possible. Hall’s futzing around for the purpose of the video only served to delay several customers as he fumbled with sauce packets and struggled to recover his food items. As a diehard KFC enthusiast, this writer was shocked and appalled to see such egregious misbehavior in the queue.

Beyond the drive-thru, Hall neatly slotted his tank amongst the hatchbacks in the car park. The relatively-flat surfaces of the Scimitar worked as an impromptu serving table for the Colonel’s finest. It’s essentially an outdoor picnic on the tank’s body, which is fine as long as the weather holds out.

It’s not Hall’s first time out, either. He’s previously taken the Scimitar through McDonald’s for the laughs, as well as a local carwash.

If you own a tank, it’s clearly a great thrill to pick up some fried chicken astride your armored beast. It clearly gets a good laugh from the bystanders, too. Just don’t try this in a main battle tank with a full-size gun, because there’s no way that’s making it through without incident. We suggest a sign, posted up at every drive-thru: Light Tanks Only.

The post Yes, You Can Take a Tank Through a KFC Drive-Thru appeared first on The Drive.